Zion Williamson (6/6/00) was hype personified, coming in as the number one draft pick in 2019. He recently signed with the New Orleans Pelicans, and is like trying to guard a mack truck down-low… it simply can’t be done!

We’ve listed some of his best Zion rookie cards to look out for, with something to fit every budget.

Zion Williamson was born on 7/5/2000 in Salisbury, North Carolina.

He attended Duke Univesity but lasted only one year as his skills were highly sought-after at the next level.

He was drafted number one in the 2019 NBA draft by the New Orleans Pelicans and is being deemed the savior of the city in the Big Easy.

Time will tell if this comes true but he is an exceptional talent and could definitely be a difference-maker even at his young age.

Here are the best Zion Williamson rookie cards to date… 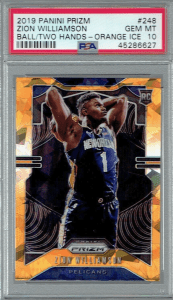 This is the most popular of all of the Zion RC and is a must for all collectors.

The Zion Willamson Prizm cards are available in all sorts of crazy styles to include Pink Ice, Blue, Purple, Orange Cracked Ice, and even one called Fast Break Disco?

The card is numbered 248 and reads “Following in the footsteps Art Heyman (1963), Elton Brand (1999) and Kyrie Irving (2011), Willamson became the fourth player from Duke to be taken first in the NBA Draft in 2019. And if you believe the hype he could be the best. Winning the NCAA Player of the Year Award as a freshman is just the beginning”. 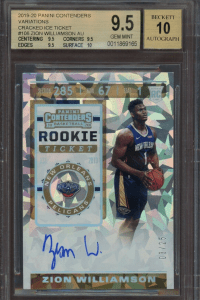 This card leaves us breathless and maybe the perfect basketball card!

We love LOVE the cracked ice look first of all and then when you pair it with the future of the NBA for the next 15 years (and he might just end up being NBA player of all-time) and you have something really special.

The Zion Williamson Contenders Cracked Ice Rookie Ticket card is numbered 108 and only 25 of these bay boys were made. 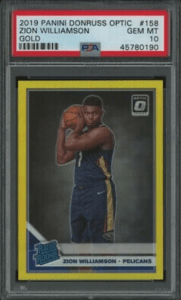 Holy smokes is this card a smoke show or what!

The odds of me or you owning this card are slim to none… BUT… in the unlikely event one of us gets our paws on this bad mama JAMA boy does it make a great investment.

The card is numbered #158 and only 10 of them were produced.

If you find this card available be prepared to take out a second mortgage on your house if you desire to own it. 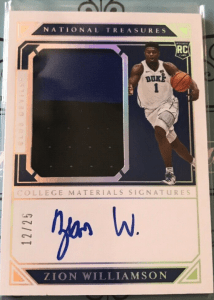 An extremely rare item, this card is another that goes for big bucks! Expect to pay at least $1000 for your own rookie patch, which has an RC logo in the top right next to a picture of Williamson receiving the ball.

Despite the cost, there’s little of interest located on the reverse, aside from the usual guarantees about the legitimacy of the patch and the autograph. However, if he lives up to the hype, each MVP award will only add to the potential profits in the future.

The Immaculate Zion Willaimson rookie cards are available in a variety of different versions and will set you back a mortgage payment or three. 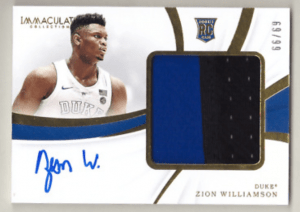 The card is numbered 81 and reads “Those hops aren’t just to put to good use when Williamson takes off for a dunk. They also come in handy when he needs a big block. In the second half of a victory against Virginia on Feb. 9, 2019, the freshmen forward sprinted toward the 3 point arc. lifted up and sent a shot flying into the stands.” 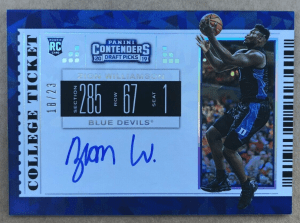 Another sick Zion rookie card that will cost you more than a few peanut butter and jelly sandwiches but many will argue Zion is worth the price.

The 2019 Zion Panini Contenders feature him either going in for a layup or pulling up for a jump shot depending on which version of the card you have.

The back of the card reads “Duke was stacked in 2018-19 season, but even among a slew of blue-chippers, one Blue Devil stood above the rest.”

This is definitely a must-have early Zion Williamson rookie card. 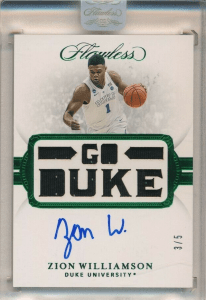 Bottom line: If you see this card on auction… make a bid 🙂 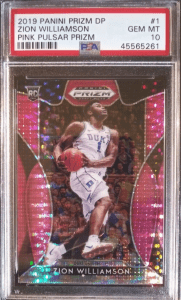 Signed versions of the Prizm card typically sell for thousands of dollars apiece, as collectors are buying into the idea that Williamson is going to be around for a while.

However, you’ll also be able to find a selection of affordable entry-level cards, like the silver refractor which sells for roughly $70 at auction.

They’re still sought after by collectors hoping to complete the set, so you don’t necessarily need to spend thousands if you’re aiming to invest in a couple of Williamson cards for the future.

We have a buddy who will not buy a card unless it has the players autograph on it… if you are of this ilk here are the best Zion Auto Cards to add to your fanboy collection! 🙂

Being an autograph hunter is not for the weak as you have to spend money and wait around hoping the rare card comes up for auction on eBay. But autographs are also extremely lucrative and you should be rewarded down the road with a juicy ROI.

Here you can find all of the current Zion cards up for auction at eBay!  Good luck!

Rookie of the Year Odds?

We don’t see Zion winning the rookie of the year as he simply has not played in enough games not to mention the unreal play of Ja Morant.

The value of a Zion rookie card will have an insanely high variance over the next few years due to a variety of reasons.

Please email us at info@goldcardauctions.com to get an estimate of how much any Zion card is worth (include a picture of the card if possible along with the sellers URL).

Williamson is one of the hottest players in the NBA, and that’s reflected in the average price of his rookie cards (it seems some people think he will be greater than Lebron James and Jordan already!).

However, he’s likely to miss six to eight weeks of the season following arthroscopic surgery on his right knee, which is a slight dampener for now.

The highly-rated rookie’s explosive dunks make him stand out from the crowd, but it’s worth remembering that he also had knee issues at Duke.

If his body gives out unexpectedly, his card prices are likely to implode accordingly.

Considering the news, it could be the ideal opportunity to snag one at a cheaper price, but you’ll also have to weigh up the potential for further injury.

It could ruin his career before it’s even started, but a return to full health would see the opportunity for great returns.

If you’re looking to invest in NBA cards check out our “Best James Harden Rookie Card” write up.