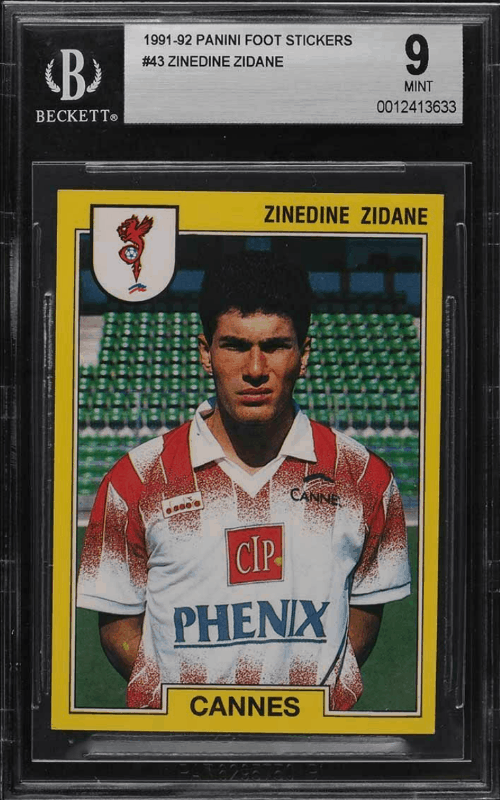 Zinedine Zidane (6/23/1972) won a World Cup in 1998 with France and played midfield for AS Cannes, Girondins de Bordeaux, Juventus, and Real Madrid CF.

If you’re looking to add the 1991 Panini Stickers Zinedine Zidane rookie card to your collection you better bring your big stick as it will cost thousands at high grades (sold for $13,900 on eBay 9/27/2020).

Numbered #43 the card shows a young Zidane posing yearbook style with an “I don’t want to be here” look on his face which is not surprising knowing Zidane. 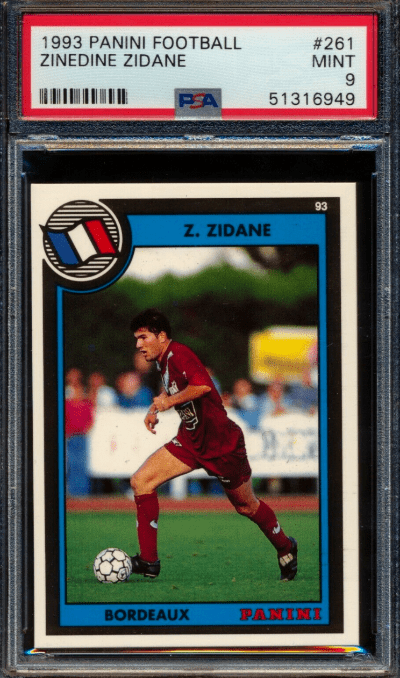 The 1992 Panini France Zinedine Zidane rookie card is an excellent pick for most investors looking to own some overseas soccer talent.

Numbered #261 the card shows Zidane dribbling the ball down the pitch while sporting his red France uniform.

The France flys in the top left corner, his name in the top right, and the word Panini in the bottom right. 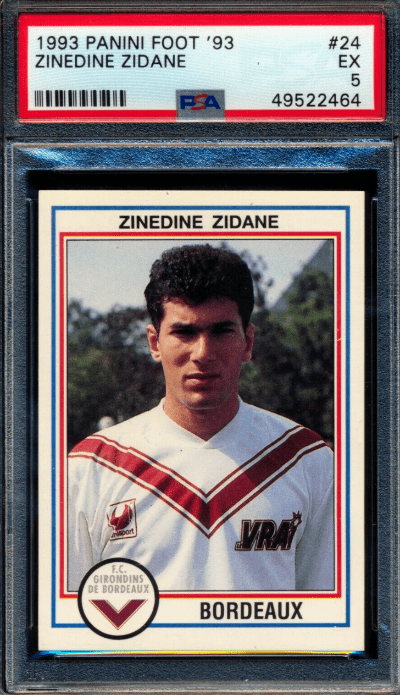 The last card on our list is the 1993 Panini Foot Stickers Zinedine Zidane rookie card which is ideal for investors looking to own Zidane in the cheapest way possible while still getting a good ROI.

Numbered #24 the card shows Zidane again yearbook style with a disgruntled look on his face.

His name is centered at the top and the team name circled in the bottom left. The edges are white with red and blue lines. 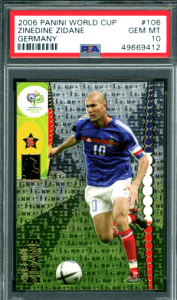 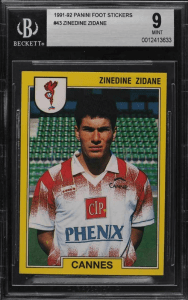 The most expensive Zidane rookie card as we eluded to early in this write up is the 1991 Zinedine Zidane Panini Stickers rookie card.

If you are looking to buy a few Zidane cards but want some advice please email us at info@goldcardauctions.com.

Do you own Zidane cards and want an estimated value or looking to sell them? DM us on the Gold Card Auctions Facebook Page.

Zidane is a top-rated rookie card in terms of soccer cards and is right up there with Messi in terms of popularity.

If you are looking to diversify your sports card portfolio by adding some soccer (i.e. football across the pond) Zidane is an excellent starting point.

Not only was he one of the best players to ever play the game but he is also still making news in the game as a head coach and a darn good one… cheers!