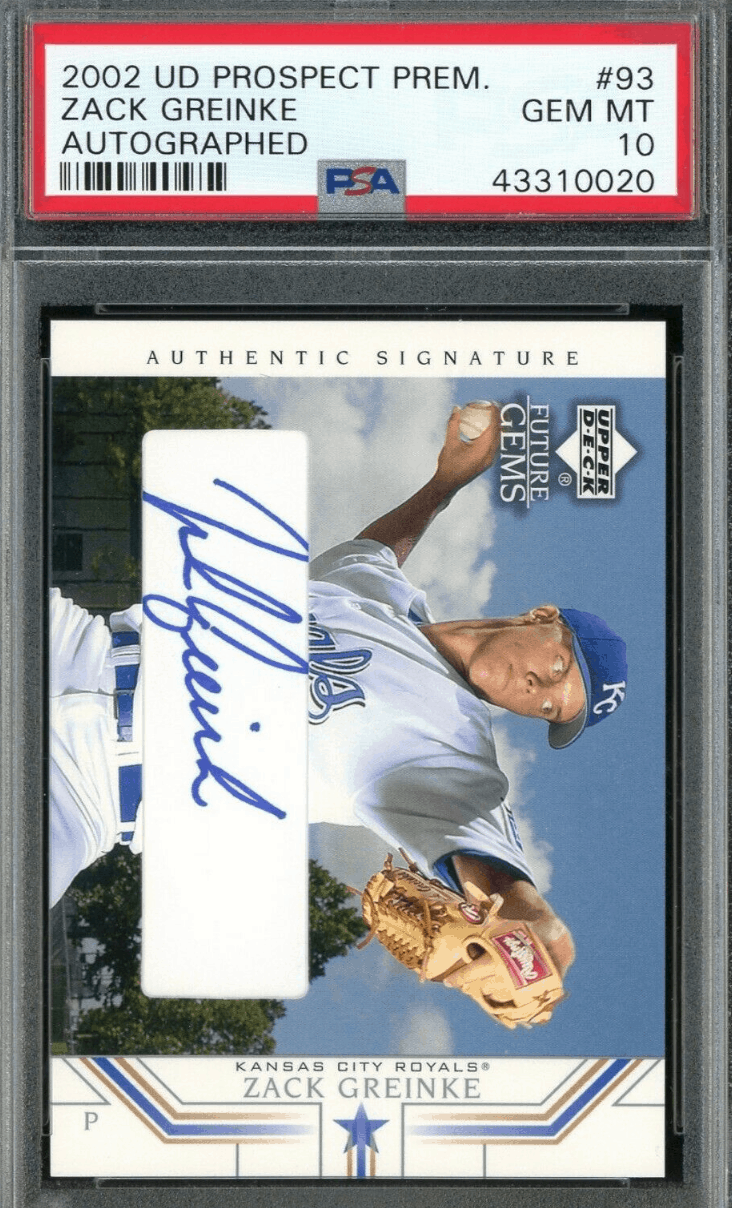 Zack Greinke (10/21/83) is a versatile pitcher who currently plays for the Houston Astros. He’s a six-time All-Star and earned six Golden Glove awards between 2014 and 2019.

Greinke is at the tail-end of his career, having featured for the Royals, the Brewers, the Angels, the Dodgers, and the Diamondbacks respectively before switching to the Astros in 2019.

We’ve prepared a checklist, with three of his most popular rookie cards and an investment guide as he begins to near retirement.

There aren’t many to choose from, but here are three of the most popular Greinke rookie cards that have recently sold at auction. 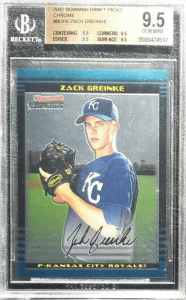 The 2002 Bowman Draft is a basic option, while there’s also a Gold parallel. It has a large landscape image of Greinke clutching his mitt, with no other discernible features. The reverse reads;

“Resume: Considered one of the closest high school prospects to the majors in the 2002 draft… Completed his senior year with a 9-2 record and a 0.55 ERA… Walked just eight against 116 strikeouts.

Skills: Shows arm action and delivery that remind scouts of Roger Clemens… Fires fastballs into the mid-90s… Mixes in plus change-up and breaking ball to keep hitters guessing… Pounds the strike zone. 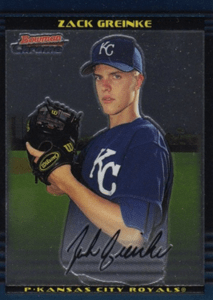 As the name suggests, the Bowman Chrome is a slightly rarer version of the card listed above. A premium option, you’ll be able to tell the difference by looking at the background color.

It also contains an identical quote to the Bowman Draft on the reverse. 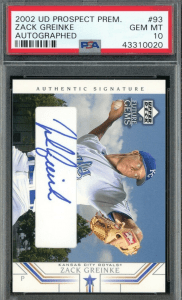 His first ever signed rookie card, the 2002 UD is more valuable than the brace of Bowman options listed above. This is largely due to the autograph, which is signed on a label that has been embedded into the card.

The landscape layout comes with a large image of Greinke preparing to throw a baseball, while the reverse contains a simple guarantee for the signature. It’s typically the most popular option at auction, with a PSA 10 recently going for just over $200.

Greinke has more than just the three cards listed above and thus we have one more card to mention that just missed the list. 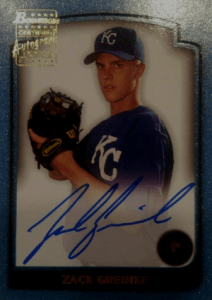 This card features two images of Greinke, placed side by side on the card that is done in a landscape format compared to most cards which are portraits.

Greinke looks very young in both images and won’t crack a smile as he projects a tough aura.

The price for this card is not very high due to its high quantity and lack of unique features but investors who cannot find the higher-end Grienke cards could look at purchasing a bundle of these.

Greinke doesn’t have a wide array of rookie cards, so you’d think that they would be more expensive considering what he’s achieved over the past few seasons.

However, he arguably wasted his early years after failing to settle with any one team, and only began to see a career resurgence halfway through his time with the Dodgers in 2014.

His Hall of Fame odds also took a slight hit after he was replaced in a controversial decision midway through Game 7 of the 2019 World Series, but he still has two years remaining on his contract, and he’s a 6-time Gold Glove pitcher.

Greinke has time to cement his legacy, and he’s still performing at a high level.