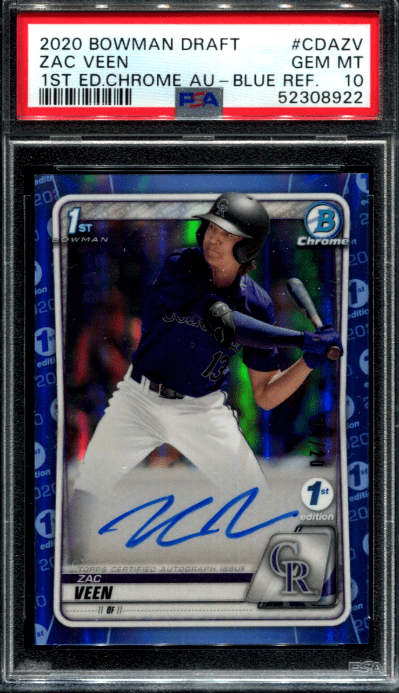 Zac Veen (12/12/01) was selected ninth overall by the Colorado Rockies in the 2020 MLB draft. Supremely talented with a bat in hand, he’s an amazing prospect, although he will need to improve on the defensive side of the game if he wants to hold down a place in the long-term.

He could yet be the top prospect by the end of 2022, but he will face stiff competition from the likes of Giants shortstop Marco Luciano and Yankees outfielder Jasson Dominguez.

Here are three of the best Zac Veen rookie cards on the market today, along with investment advice if you’re aiming to get ahead of the curve.

We’ve narrowed it down to a trio of great options, with something to suit almost every budget found below.

Veen features heavily in the 2020 Bowman Draft set, but this card has to be the pick of the bunch. As you’ll see from the logo in the top left corner, it’s his 1st Bowman card, while the auto at the bottom has helped to drive up values.

There’s a great action shot of the player in MLB licensed gear, following through with a bat as he does what he does best. The Rockies logos make a huge difference and could prove to be important from an investment perspective.

“Parallels are where the real money is, with anything rarer than Gold currently selling for at least four figures. It’s not bad for a player who has yet to swing a bat in the major leagues.” 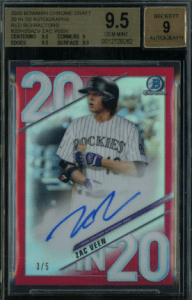 A Bowman Draft subset that highlights the 20 top players from the 2020 MLB draft, Veen is included in the 20 in ‘20 collection. We’re looking at the signed version, which comes with an auto which is found near the bottom of the card.

Unlike the others, there’s no long list of parallels to be on the lookout for, as there are only two hyper rare options on the market. Design-wise, it’s instantly recognizable due to the large ‘2020’ logos found on the top and bottom corners. It features a simple image of Veen, with a bat tucked under his left arm. 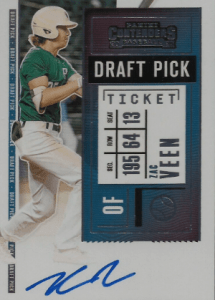 The final card to make the list is the most affordable option by a significant margin at the current time of writing. Contenders RCs are always extremely collectible, be it due to the Ticket design or the inclusion of an autograph at the bottom.

In truth, they haven’t chosen the best image of Veen, as it’s side-on, and he’s gurning due to the effort of swinging. The bat is also hidden by the Ticket on the right, which is disappointing considering he’s known for being a heavy hitter. There’s also no MLB branding on the card.

Regardless, it’s a decent budget option, and there’s a typical range of parallels.

The most expensive Zac Veen rookie card sold to date is the 2020 Bowman Chrome Draft Zac Veen Black Wave Refractor 1/1 Auto which sold for a mind-blowing $6,327 on 1/5/2021 via eBay auctions.

With COVID-19, there wasn’t a chance for Veen to complete his senior high school season (he played just 11 games) and there was no rookie or A-ball for him to participate in this summer.

However, he has quickly become one of the more hyped prospects in 2021, and it continues to build in the early stages of the year. As noted in a scout report midway through 2020 by Bernie Pleskoff;

“Veen’s path to the Rockies may be on a very fast track. To begin, the Rockies farm system isn’t deep in outfield prospects. Sam Hilliard, also a left-handed hitter, projects to help the big league club almost immediately. There are a couple of other outfielders waiting in the wings, but Veen has more upside than any in the group. It is likely the designated hitter will be introduced to the National League, offering additional offensive opportunities.”

On the one hand, Veen has obvious potential and looks sure to get a chance at the majors in the next few years. Even so, there’s a chance it could all go wrong for the young prospect, so there is an element of risk that should be considered when looking at his cards as a potential investment.

Find Us On Social!

Has Covid-19 had an impact on his early development? Investors in his RCs seem to think not, but it’s slightly riskier than the average prospect making it a pass for us.