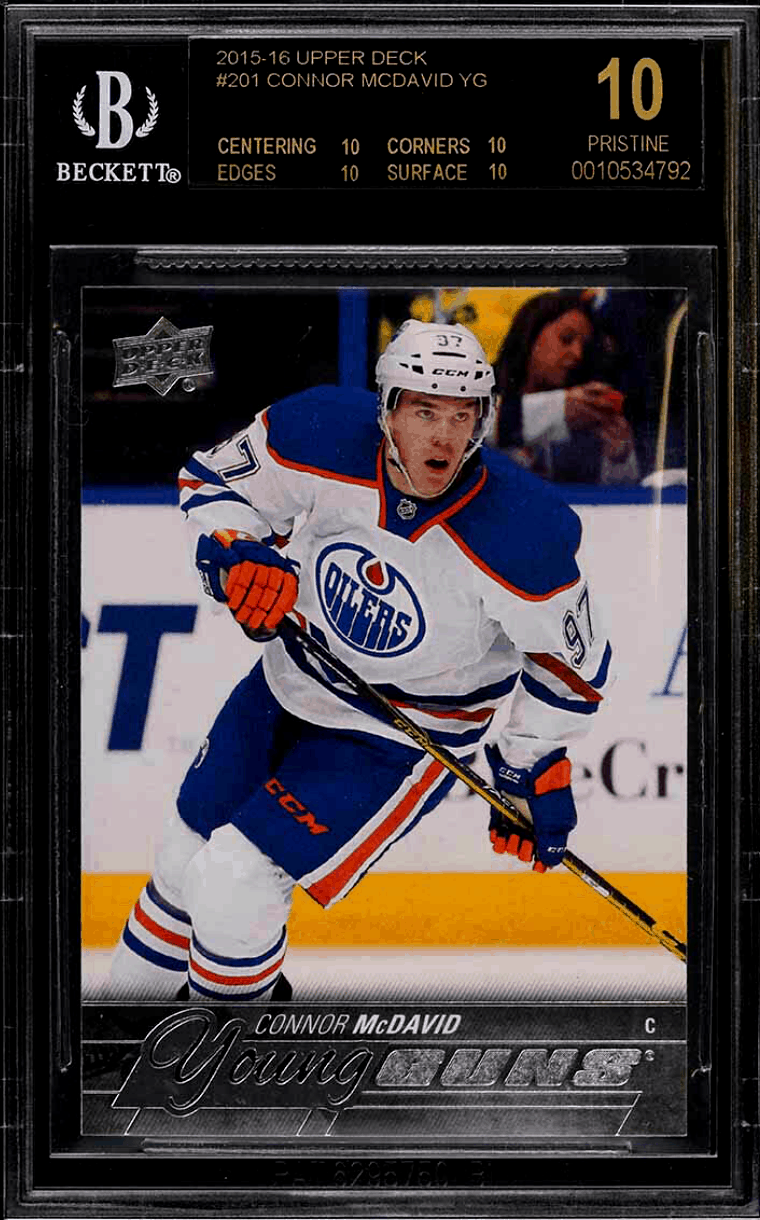 Upper Deck Young Guns have been around since the ’90s and are the best of the best when it comes to hockey rookie cards.

Sadly we don’t have Young Guns cards for players like Wayne Gretzky, Brett Hull, or Mario Lemuix BUT we are fortunate to have players like Ovie and Sid The Kid featured. When we’re buying hockey rookie cards in regards to the current times the term “Young Guns” is involved in our search 95% of the time.

So having said that here are the best Upper Deck Young Hockey Cards for your sports card investment dollar. 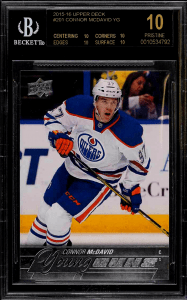 Connor McDavid is without question one of the best hockey players that has ever laced up the skates.

In only his second season in the league, he racked up 30 goals and 70 assists for a total of 100 points. He was number one in All-Star voting that year and won the Hart Memorial Trophy.

Numbered #201 the reverse of the card reads “McDavid was named MVP of the 2015 OHL Playoffs after recording 49 points (21-28-49) in 19 games. Five of those points came in a series-clinching 7-3 win over Sault Ste. Marie in Game 6 of the Western Conference Final, courtesy of a goal and four assists“. 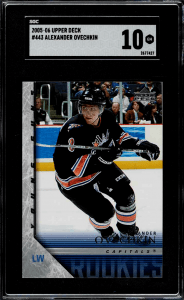 For our money, outside of the Wayne Gretzky rookie card, the Alexander Mikhailovich Ovechkin young guns card is the best hockey card investment in the hobby.

In our best Alexander Ovechkin rookie card write up we list his UD Young Guns card as a very solid investment and we have bought 3 high grades since.

The Ovi Young Guns Rookie Card is numbered #443 and the reverse of the card reads “To put it in the simplest terms, there is nothing the Russian soon-to-be superstar can’t do the ice. Ovechkin immediately began making headlines throughout NHL cities with his scoring prowess early in 2005-06. Washington fans are in for a fantastic ride with Ovechkin on board“. 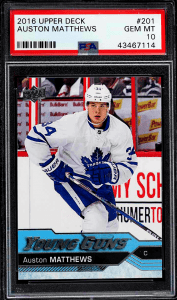 Mr. Matthews is one hell of a hockey player eh?

Auston Matthews is a goal-scoring machine thanks to his quick hands, feet, and goal-scoring mindset… he has an uncanny ability to put the puck in the net from a split second notice.

The Auston Matthews Young Guns card is numbered #201 and the reverse reads “After notching a hat trick in the first two periods of his NHL debut, the top pick of 2016 became the first player in modern NHL history to score four goals in a game, late in the second at Ottawa on Oct. 12, 2016“. 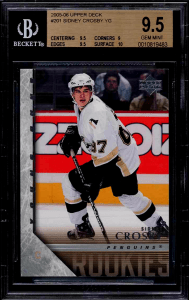 Had Sid The Kid not been riddled with injuries he may have had a shot at being the second greatest player to ever play the game. Unfortunately, concussions are nasty business and Crosby has paid a toll over the years with hits to the head.

We feel that his career will most likely get cut short due to concussions BUt that doesn’t mean his UD Young Guns rookie card isn’t a good buy. In fact, we have recently bought a PSA Grade 10 within the last month.

Numbered #201 the card shows Crosby gently skating up ice looking to take off with an explosive speed burst as soon as the puck is attached to his stick (and once it’s there it’s very hard to get off unless it’s in the back of the net).

The reverse of the Sidney Crosby Upper Deck Young Guns card reads “Sid the Kid arrives in the Steel City as the most highly touted rookie since Mario Lemieux made his NHL debut in 1994. Crosby collected 120 goals and 183 assists in just 121 games the past two seasons in the QMJHL and was named Canada’s Major-Junior player of the Year each campaign“.

Not a screaming BUY like the Ovie Young Guns but a good buy nonetheless. 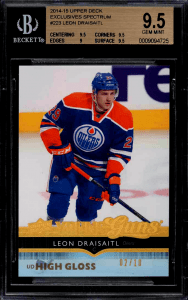 We round out this list with Mr. Leon Draisaitl who happens to be a teammate of the first player on this list, Connor McDavid.

How in the world do the Oilers not make the Cup Finals with these two on their roster is beyond the scope of this article but it should happen at some point?

Leon Draisaitl is a BIG playmaking center, literally. He weighs in at over 200 pounds but moves around the ink almost as good as Theoren Fleury in his prime!

The 2014 Leon Draisaitl Young Guns Upper Deck rookie card is numbered #223 and shows him looking for the biscuit to put in the toaster.

The reverse of the card reads “Leon’s father, Peter Draisaitl, was an outstanding player in the country’s top leagues for 18 seasons, and represented Germany (or West Germany) on international hockeys top-level three times: at Calgary in 1988, Albertville 1992 and Nagano in 1998. Leon was a WHL East First-Team All-Star with the Prince Albert Raiders in 2013-14“.

Upper Deck Young Guns first made their debut in 1990 with Sergei Fedorov and Pavel Bure with less than stellar fanfare even though we thought they were pretty sweet back then.

Without a doubt, they are currently the cream of the crop of the NHL rookie card scene and have immense value in regard to the game’s best players.

Hockey card collecting isn’t as popular as baseball, football, or basketball but there is still great investing value in these Upper Deck Young Guns… if you are not a big hockey card guy and want to invest in any given rookie card for any given player simply type “xyz player” followed by “Young Guns” and you will be just fine 🙂