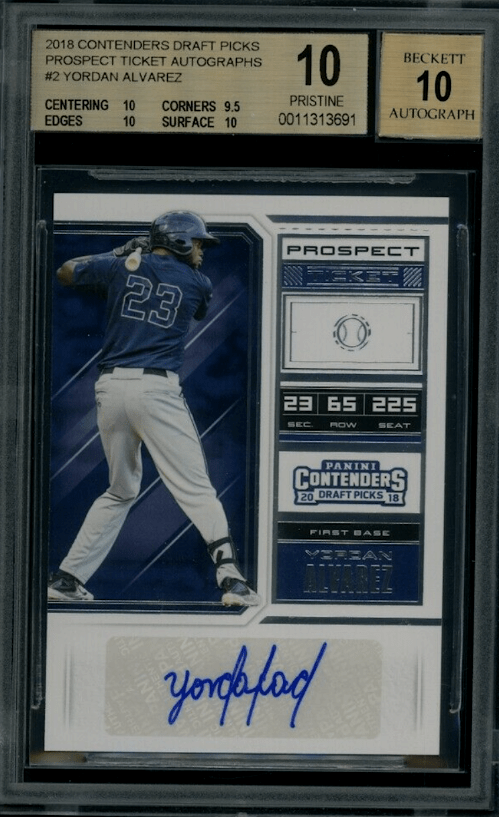 The Yordan Alvarez hype train is leaving the station. Do you have your ticket?

After setting Triple-A on fire with a positive video-game-like .372 batting average, with 19 homers, impossible .802 slugging percentage, and 58 RBI in 167 at-bats, Alvarez has clearly outperformed the minors.

It’s rare for a prospect to go from slept on to consensus future star this quickly, so you don’t have long to invest in his rookie card before everyone else figures out what the Astros and a few savvy investors already know: Yordan Alvarez is the real deal.

Is a Yordan Alvarez rookie card a good long-term investment?

The future looks bright for Alvarez but the Astros could be on a downhill progression unless they sign some serious pitching help.

Experts agree that White’s .207 average against right-handers and total lack of power could pave the way for a left-handed bomber like Alvarez.

The Astros look like they’re going to use him a lot this season as manager A.J. Hinch already seems impatient with 1B/DH Tyler White, sitting him more often as the year goes on.

Prospects Houston Astros RC BCP123 Rookie If the first-class tickets on the Yordan Alvarez hype train are a bit out of your price range right now, don’t worry, there are still some economy tickets available.

If you want to invest in Yordan Alvarez’s rookie card before everyone figures out how special this kid really is, this card is your chance. Don’t let its affordability fool you.

This Bowman Chrome card featuring an action shot of Alvarez doing what he does best is still a great investment to watch grow with every swing of his bat.

This card shows Yordan grinning big with the bat in his hand. The card also has an autograph and an error version which both will collect big bucks at an auction.

The cards are numbered #54 and are a solid buy.

This is a SOLID Alvarez rookie card from Topps. The card shows Yordan walking up to the plate (or away from the plate) with his bat in hand with what looks like the Baltimore Orioles warehouse backdrop.

We really like this card for investment purposes and you should be able to get it fairly cheap in its base form (for now).

While the Contenders set from Panini may be more often associated with football instead of baseball, this Alvarez card is too nice to completely leave off this list.

It has the same ticket design that the set is known for which always looks appealing, and this card has an autograph on the bottom of the card.

The main color theme of the card is a dark blue which contrasts nicely with the white of the rest of the card. 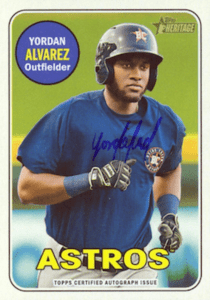 He defected from Cuba, then established residency in Haiti in 2016.

The Los Angeles Dodgers gobbles him up as an international free agent in 2016 but then foolishly traded him to the Houston Astros (ouch! Imagines a Dodgers team with Bellinger and Yordan Alvarez back to back!).

Not only does this kid mash the ball but he is on one of the best if not the best team in baseball (or at least was).

GoldCardAuctions.com recommends adding a Yordan Alvarez rookie card to your portfolio as we strongly believe he could win more than one World Series and League MVP’s.

Having said that, Alvarez is one of baseball’s youngest stars and it was hard to limit yourself to buying just a few of his rookie cards BUT at this point, you should limit yourself to just 3 or 4… if he strings together a few more MVP like seasons then we can start adding double digits…. cheers!