Yogi Berra (1925-2015) is one of the best-known baseball players from his era, with a presence that is still felt to this day. He was an 18-time All-Star who won 10 World Series championships as a player, which is still the record.

A big personality off the field, he’s also the originator of the phrase; “It ain’t over till it’s over.” He used it to describe the 1973 National League pennant race. His team was a long way behind when he said it and they eventually rallied to win the division title with a game to spare.

A Yankees legend, he also turned out for the Mets in later years. In fact, Berra was either a player, coach, or manager in every one of the 13 World Series wins that New York baseball teams recorded from 1947 through 1981. Talk about a good luck charm!

Here’s a rundown with three of the best Yogi Berra baseball cards, looking back through the years at some great vintage sets.

There are lots of great options if you’re a Berra fan. The Yankees were huge at the time, while he continued to sign cards after his retirement. In terms of the ‘best’ Berra cards, it’s hard to beat anything from the early years. 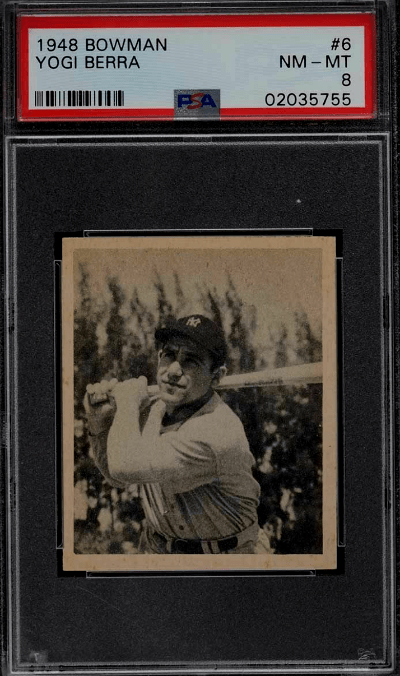 You’ll struggle to find better than his 1948 RC in terms of pure value. Produced by Bowman, it features a smaller 2 1/16″ by 2 1/2″ black and white photo of Berra in the middle, along with a thin white border.

73 years on from its original release, it’s almost impossible to find gem mint copies, while it’s a key card from the set, beaten only by the Stan Musial RC. The reverse contains basic information about the player, and lists his name as ‘Larry (Yogi) Berra’. You’ll also spot a vintage Bowman Gum advert at the bottom.

It’s a real piece of history and is somewhat underpriced considering how popular Berra is in terms of mainstream appeal. Given the age, anything above a PSA 6 will cost at least four figures, while only one copy has received a 10 grade from the service. 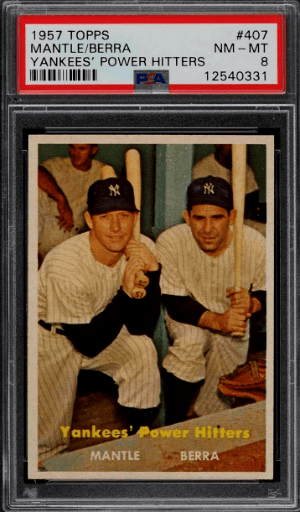 Yogi and Mickey made the Bronx Bombers into what they are today (with a little help from someone named Babe Ruth). The 1957 Topps Yogi Berra Mickey Mantle baseball card is a must-have for the hardcore (and wealthy) NY Yankee baseball card collectors.

Numbered #407 the card pictures Mantle and Berra with bats slung over their shoulders while posing legs up on the steps leading out to the field. One of the more underrated Topps baseball cards and a great buy at the right price. 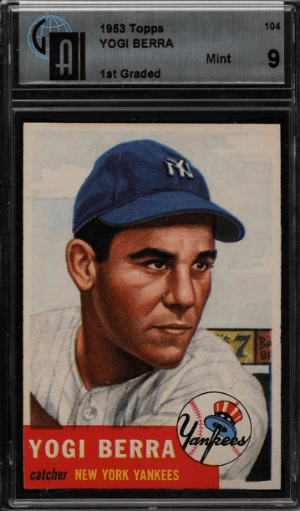 We’ve split two expensive options up neatly, using this colorful card released by Topps in 1953. It features a large profile shot of Berra, although he has a serious expression on his face which goes against the grain compared to the majority of his collectibles.

As the follow-up to the famed 1952 Topps set, it’s not as popular, but still includes big names like Mickey Mantle and Willie Mays.

The lower-left corner tends to be the source of numerous issues, holding the card back from achieving higher grades. This is due to the red coloring found on the name tag at the bottom. 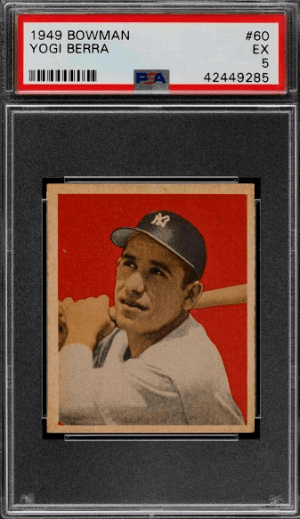 It might have been released a year after his ‘48 RC, but that hasn’t stopped this Bowman card from becoming another great investment option. Advances in technology allowed for the inclusion of color for the first time in Bowman sets and this card is no different.

A vibrant red makes up the background, contrasted against a large image of a young Berra holding a bat in hand. In a strange design choice, there’s no nameplate at the bottom as he was included in the first half of the set. However, it does help the card to stand out from the crowd, and there’s no mistaking Berra in the middle. 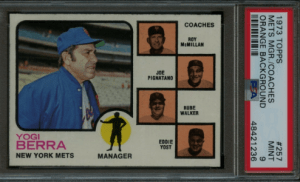 The most expensive Yogi Berra baseball card is the legendary 1948 Bowman Yogi Berra rookie card #6 (in black and white).

Looking to purchase a Yogi Berra baseball card on eBay but need advice? Reach out to us at advice@goldcardauctions.com and we would be more than happy to chat with you.

Berra did manage after his playing career was over. The most expensive Yogi Berra Manager Baseball Card is the 1973 Topps Orange Background #257 Yogi Berra Mets Manager Coaches card.

The market for older players is generally low-risk, especially when looking at some of the best players from the post-war era. Berra is arguably the greatest catcher of all-time, and it’s hard to find many faults in terms of his legacy.

With an RC released just a couple of years after WW2, and a career that seems almost ridiculous on paper, Berra has a number of cards that are slightly underpriced in the present day. Maybe that’s due to the likes of Mantle and co stealing his thunder ever so slightly, but he still has a number of options that have stood the test of time.

“We’ve listed a trio of great options available at differing price points above. His RC is the obvious standout, but the inclusion of colour in 1949 Bowman sets also helps it to make a mark.”

As always, we’d look at PSA-graded copies first when buying vintage cards, and we would recommend getting the highest grade that your budget allows. They don’t tend to come up too often, so it’s worth keeping tabs on Berra’s older cards whenever they’re on the market.