Yasiel Puig (12/7/90) is a right fielder who signed with the LA Dodgers in a seven-year deal worth $42m back in 2012. He made his MLB debut a year later, and he was selected by Baseball America to their annual “All-Rookie team”.

He made his first All-Star appearance in 2014 and went on to hit his 100th career home run in 2018. Eventually, things went south between Puig and the Dodgers, and he was sent to the Cincinnati Reds, along with outfielder Matt Kemp, pitcher Alex Wood, and catcher Kyle Farmer.

A year later he joined the Cleveland Indians, and he’s currently a free agent as of 2020.

Given his troubled career so far, here’s everything you need to know about Puig’s best rookie cards, along with investment advice for the future.

As he made his debut in 2013, Puig was eventually included in the majority of sets from that year. We’ve come up with three of the best options you’ll find on the market. 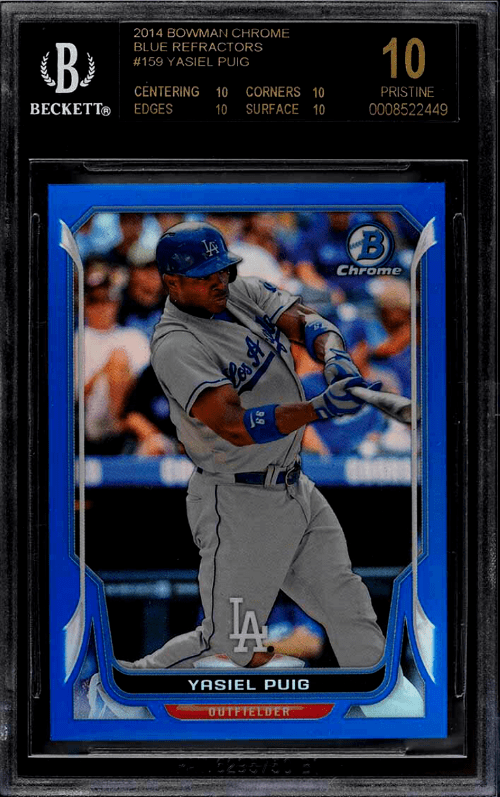 By far Puig’s most popular card, his Prospect Autograph comes from the 2013 Bowman Chrome set. It features an action shot of Puig as he blasts a ball into orbit, with a great on-card auto found at the bottom. (On some versions he has also added his jersey number.)

If you’re interested in more valuable options, we’d keep an eye on the various Refractor parallels from the set. They correspond with the border color, so it’s easy to tell the difference. 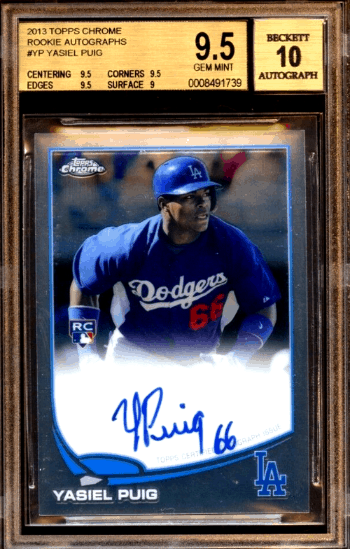 Next up is his 2013 Topps Chrome card, more specifically from the Autographed Rookies subset. It’s another great Puig RC, with a lined action shot of the player as he runs between bases. The bottom is devoted to a large on-card auto, with the image fading away to allow for maximum clarity.

The black parallel comes with a signature filled in silver pen, which is undeniably more attractive than the base version. 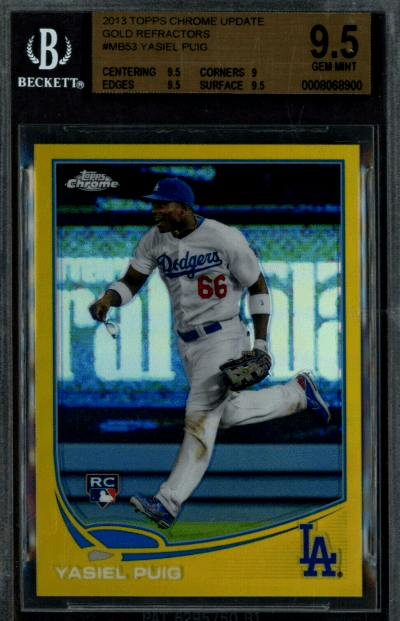 The final card to make the cut is from the 2013 Topps Chrome Update set. Once more, it features a lined action shot of Puig in motion, with both feet off the ground as he celebrates wildly. It’s a great picture, and arguably the best of the trio. (There are three variation short prints from the set, and each has a different image.)

There’s an RC logo in the bottom corner, and while there’s no signature to be found, there are a couple of parallels which alter the border color. It’s an inexpensive option compared to the others on the list, and an ideal entry-level investment piece if you’re looking at the Gold or Black versions.

Puig is the first to admit that he didn’t work hard enough while he was with the Dodgers, and that’s a risk that you take when you sign a temperamental 22-year-old to a seven-year deal worth $42m.

In recent years, being switched between teams hasn’t helped the player to find any rhythm, and he’s a free agent at the current time of writing. His average hasn’t topped .267 over the past four years, giving some indication of his fall from grace.

The Atlanta Braves were expected to sign Puig in July 2020, although a positive Covid-19 result ended his hopes as he entered quarantine instead. As well as the Braves, the Giants, Baltimore Orioles, and Miami Marlins had also reportedly shown interest in the outfielder.

His rookie card prices have almost hit rock bottom following a couple of difficult years, but he’s likely to get another chance with one of the teams named above. Is it too late for Puig to apply himself, or does he have what it takes to finally capitalize on a talent that earned him an All-Star appearance at such a young age?

We are leaning towards it being a little too late and his best years are behind him… pass.