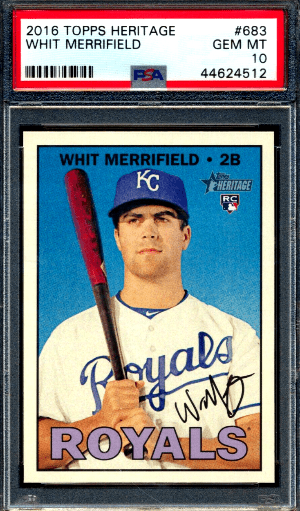 Whit Merrifield (01/24/89) has been with the Kansas City Royals since 2016 and managed to make his first All-Star appearance in 2019. He’s arguably their most indispensable player, as a super-utility man with the ability to play all over the field, along with his notable skills at the plate.

We’ve come up with a list with three top Merrifield RCs, along with an investment outlook looking over the next few years.

Here’s a rundown with the best Whit Merrifield rookie card options according to recent auction data.

The 2016 Topps Heritage set is a retro-themed release based on ‘67 Topps.

Merrifield’s card has a vintage look, featuring the player in a profile shot with a stern expression on his face while holding a bat in both hands. There’s a copy of his autograph at the base of the card, and there’s a tiny RC logo found in the top left corner. It’s one of the more popular options at auction, although it’s fairly inexpensive if you’d like to pick up a copy yourself.

The second option to make our list is his 2016 National Treasures card. The premium design and feel are instantly noticeable, with the addition of an on-card auto (filled in blue ink) found just below an image of Merrifield getting ready to take a swing. The blue and white design meshes perfectly with his KC uniform, while it has a silver trim for logos and writing.

The landscape design is complemented by a large player patch found on the right, while you’ll be able to spot the serial number just under the autograph. The NT card is the undisputed king of his signed RCs, but it’s still a lot cheaper than you’d expect given the value of the brand and Merrifield’s recent progress as a player. 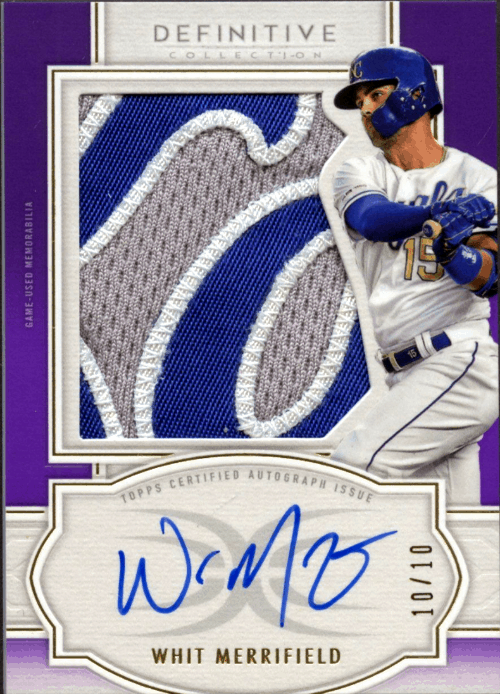 Released in 2020, this clearly isn’t an RC! However, it is a Merrifield card which actually holds some value, so we figured that it would probably be a good idea to include it anyway.

The only option to sell for a three-figure fee in recent months is the Purple parallel, which features a small image of the player mid-swing. There’s a large player patch and a great auto, while it’s serial numbered to just ten copies.

Merrifield has stepped up to the plate in recent seasons, and his first All-Star appearance in 2019 is proof of his improving fortunes. Since the restart in 2020, he’s been one of KC’s stronger players, and he’s undoubtedly underrated in relation to his skills.

As a late bloomer, he wasn’t called up to the majors until he was 27 years old in 2016. He didn’t truly break out until he was 29, which is going to have an obvious impact on the overall value of his rookie cards.

Despite his newfound status as an important member of the team, prices for Merrifield’s rookie cards have failed to gain much traction for the reasons listed above. However, this does mean that they’re a risk-free investment, while there has been increased interest following his improved form.

A late burst for an unexpected Hall of Fame spot could see values rising way beyond current levels, while later cards such as the 2020 Topps are ideal if you’re looking for the most valuable options in the here and now.