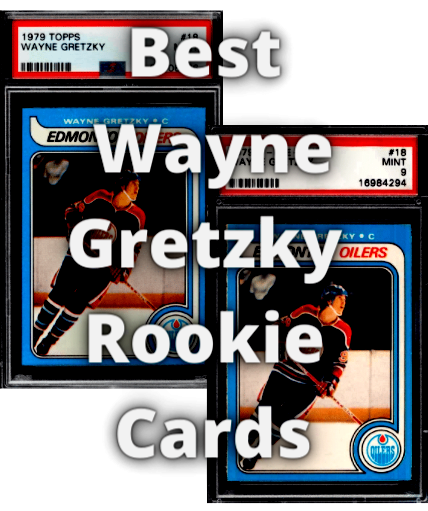 You don’t have to go back far to find a reminder of why investing in Gretzky rookie cards is a good idea. Scratch that—a Great idea.

I’ll take you back to December 2020. As the year fizzled to an end, something significant happened that sports card investors worldwide collectively raised two eyebrows at.

A Wayne Gretzky rookie card, the O-Pee-Chee RC #18 (which we have featured previously on Gold Card Auctions), sold for $1.29 million.

NOTE: In 2022, look for our article “Wayne Gretzky is the Undisputed GOAT of Hockey, but how do his rookie card values compare to undisputed GOATS Tom Brady and Michael Jordan?

Gretzky O-Pee-Chee rookie cards are among the rarest and most coveted assets on the trading card market. Two factors explain the strong demand for his RCs:

Let’s take a deeper look into the two Wayne Gretzky hockey cards, and explain how you can get your hands on them. 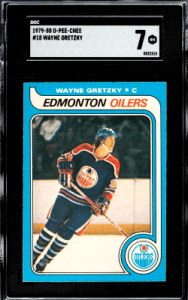 The 1979 O-Pee-Chee Wayne Gretzky #18 contains the same image as the Topps Gretzky RC issued in the same year. Virtually everything about the cards appears to be the same.

And yet, the 1979 O-Pee-Chee Gretzky RC goes for hundreds of thousands to a million bucks, while you can get your hands on a Topps equivalent for a few grand. So much of the determination of value comes down to rarity. This case is no different.

There is simply fewer mint O-Pee-Chee Wayne Gretzky RCs in circulation than Topps Gretzky RCs. And, to be clear, the cards do have actual differences. The Topps cards are generally thought to be printed on sturdier stock, which explains the more significant number of good-condition Topps.

Flip the card over, and you’ll find another distinction: the O-Pee-Chee card contains French language (in addition to English), while the Topps version is English-only.

The back of an O-Pee-Chee card also contains copyright confirming that it is an O-Pee-Chee rather than a Topps. These differences matter to hundreds of thousands (or millions) of dollars. 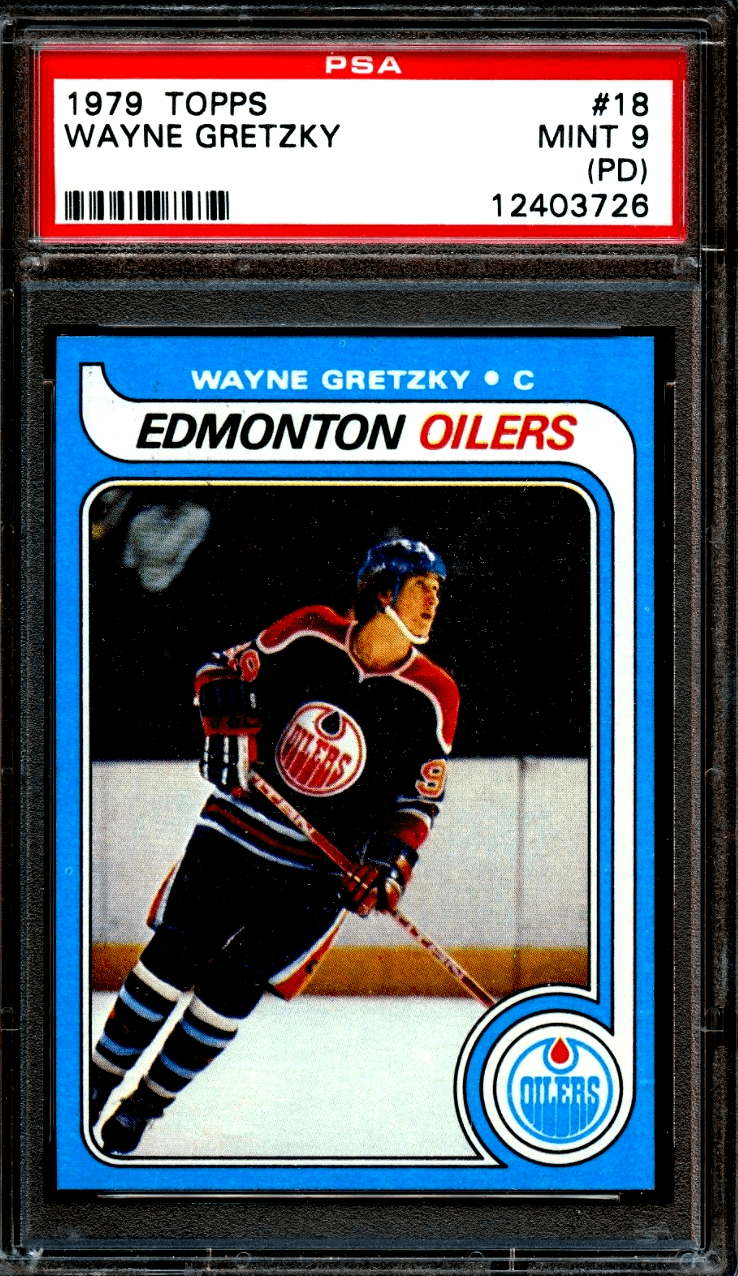 A young Wayne Gretzky made his debut in the World Hockey Association (WHA) in 1978. Because league rules prohibited the NHL from signing any player under the age of 20, 17-year-old Gretzky signed a seven-year contract with the WHA.

When the WHA’s financial woes caused the league to collapse, Gretzky’s team—the Edmonton Oilers—was absorbed by the NHL. And thus, 1979-80 became the first NHL season for a teenage Gretzky.

The image on this card is the same as on the 1979 O-Pee-Chee Wayne Gretzky #18 (more on that card in a bit). A young Gretzky balances at a near-45-degree angle, eyes peering upward towards what we presume to be the scoreboard.

Cloaked in the same blue-orange color scheme that the Edmonton Oilers use today, Gretzky’s visor-less blue helmet serves as a sign of NHL days past.

The card very much feels like 1979 as well. The light blue border serves as the backdrop for Gretzky’s youthful likeness. A white accent features “Edmonton” in black block text and “Oilers” in red. A subtle “Wayne Gretzky” and “C” let you know that you are staring at the G.O.A.T. during his first year in the league.

“Names like Gretzky don’t fade with time, they only become more appreciated. If you keep your Topps Gretzky RC in prime condition, your investment will surely appreciate as well”

An Oilers logo in the bottom right corner of the card is as exotic as this card’s stylings. It’s simple, but you have to keep in mind how many trading cards have evolved since the late 70s. Simple was the rule, not the exception, at that time.

Trading cards were also far more vulnerable to damage back in the day. The stock they were printed on is highly susceptible to bends and breaks. Therefore, securing a mint or near-mint condition 1979 Topps Wayne Gretzky RC #18 will cost you good money, generally a few thousand dollars (at least).

Is it a steep price point? Hardly, considering that a Gretzky RC (albeit not the Topps version) just sold for more than a mill. 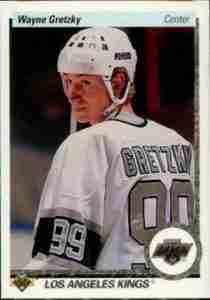 This card is one of our favorite Wayne Gretzky hockey cards. First, the stare-down is epic. Second, Upper Deck makes a super quality card, and the odds of pulling a high grade are much better than any other card printed at the time. Third, a French version has low numbers at a PSA 10 grade. 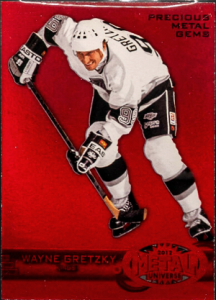 You know what we want. The above card and Michael Jordan Red Precious Gems card are both graded BGS Black Label. And have them both sides in a frame, signed by both of them. One can dream, right? 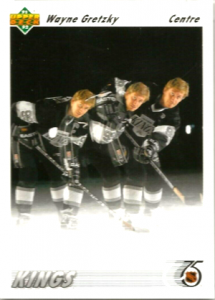 Much like 1990, the Gretzky UD card is also available in a French version, but the photo could not be more different. You are familiar with this card if you grew up in the late 80s or early 90s. We love this card and will buy hobby boxes in French over the next few months to see how many we can get on the cheap. Again UD cards grade well vs. the cards at the time. 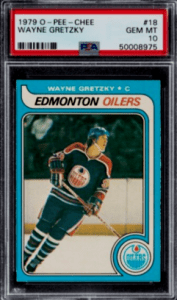 How to ID a Wayne Gretzky rookie card reprint?

The actual Gretzky rookie card will be smooth ink without dots. The fake reprint usually contains small little dots that make up the name and team name (you can see an example below).

You can also check out the area of white ice on the card. This area on an authentic Wayne Gretzky OPC RC should have fine blueprint dots and white ink. The Wayne Gretzky RC reprint (or fake card) usually has red print dots in with the blue dots.

Think you have a fake Wayne Gretzky rookie card? Let us take a look. Email value@goldcardauctions.com and include close-up images of the player name/team name and images of the ice.

There are a few names in the trading card game that you can bank on. If you own a mint or near-mint rookie card of these guys, you can sit on it and count your returns later.

Names like Jordan, Jeter, Bonds, and Brady are some of these bankable names from the modern age. But Gretzky deserves a class of his own.

Winner of the Hart Memorial Trophy for the NHL’s Most Valuable Player as a rookie—the first of eight straight and nine overall. Eight-time NHL All-First Team.

The title of undisputed greatest hockey player ever to live is enough to drive the value of Gretzky’s RCs.

Throw in that there are only two bonafide Gretzky rookie cards in circulation, and you’ve got one heck of an investment opportunity staring you in the face.

You might choose to invest in a Topps or O-Pee-Chee based on your budget. Either card is readily available for acquisition through eBay at varying price points.