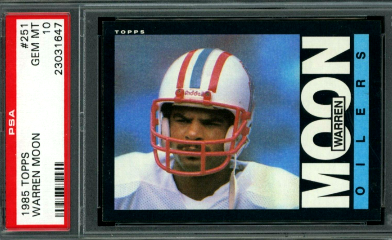 Warren Moon began his pro football career in the land of the Maple Leaf and the extremely friendly, I’m talking of course about Canada eh!

After finishing his four years at the University of Washington, NFL scouts were not high on Moon be it for the color of his skin or the rollout style offense he ran in college that differed from the widely used drop-back style of the day. Moon was predicted to be a mid-round pick so instead, he opted to sign with the Edmonton Eskimos of the Canadian Football League.

Warren wouldn’t make his way to the NFL until 1984 at the ripe age of 28. Throughout his time in the NFL, he would go on to make nine pro bowls, throw for 50,000 yards, and tied Dan Marino for the most 300-yard passing games in a season. In 2006 Moon would be inducted into the NFL Hall of Fame.

Without further ado, here are our picks for the top 10 Warren Moon football cards. 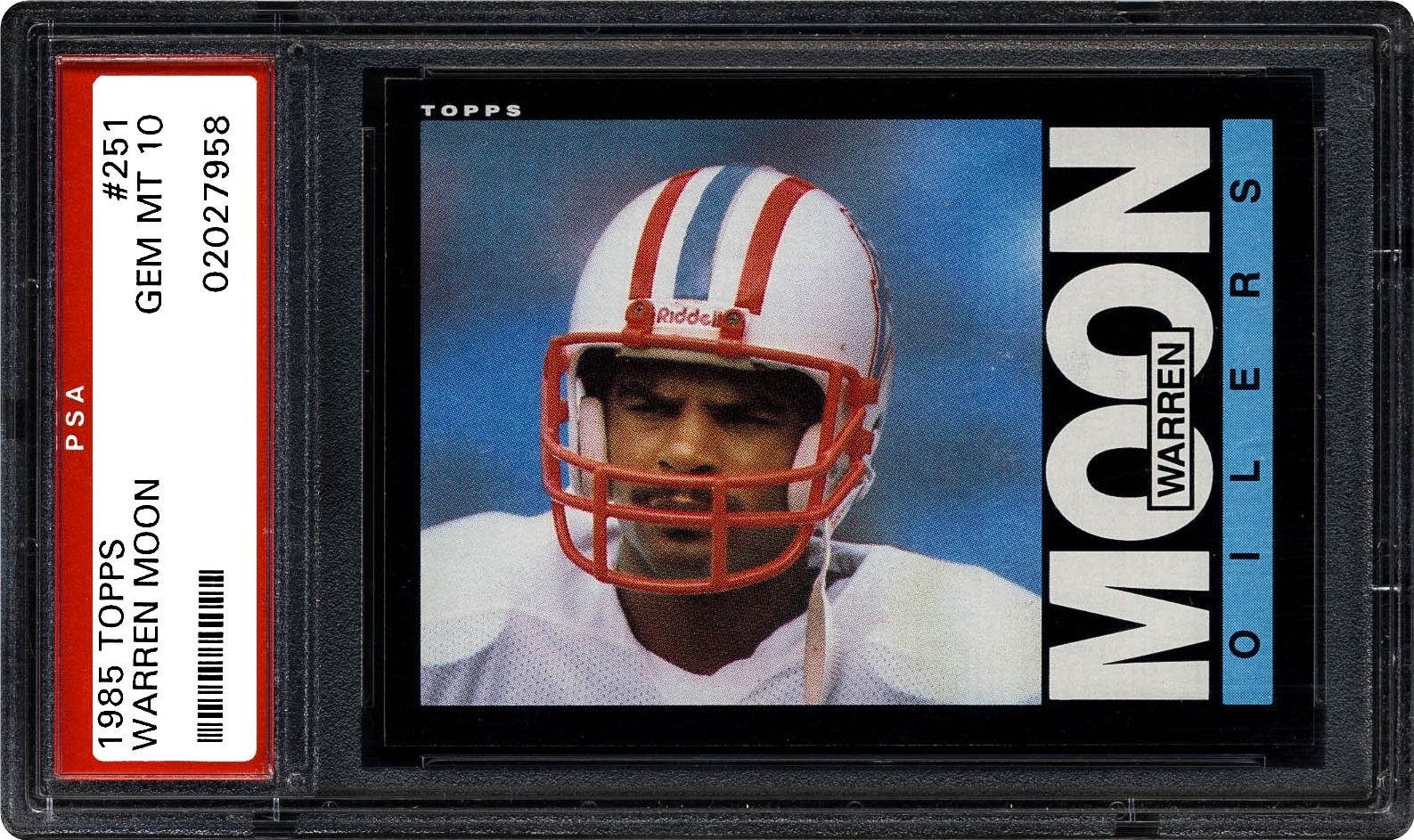 This is THE Warren Moon card. Warren’s first card featuring him in an NFL uniform and considered to be his true rookie. The 1985 Topps set features an interesting design with a black border and the Oilers team name at the bottom with Moon’s last name largely displayed.

Moon’s first season would see him break the franchise record for most passing yards in a single season year with a whopping 3,338. This is of course a record he would go on to break four more times. 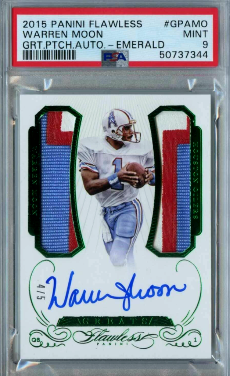 Honestly, we would rather have this Moon card over his rookie card. Auto plus a game-used patch, what’s not to like here? 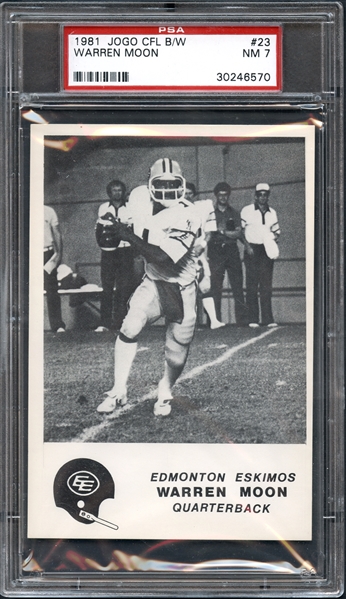 More of an oddball set, the 1981 Jogo B/W Football card is Warren Moon’s CFL rookie and technically his first-ever professional card. Warren can be seen doing what he does best, rolling out of the pocket and making a play.

Warren Moon is also in the CFL Hall of Fame after playing six seasons and amassing some impressive numbers. A 57.4 percent completion percentage, over 21,000 passing yards, and 144 touchdowns are a lot through such a short stint north of the border. 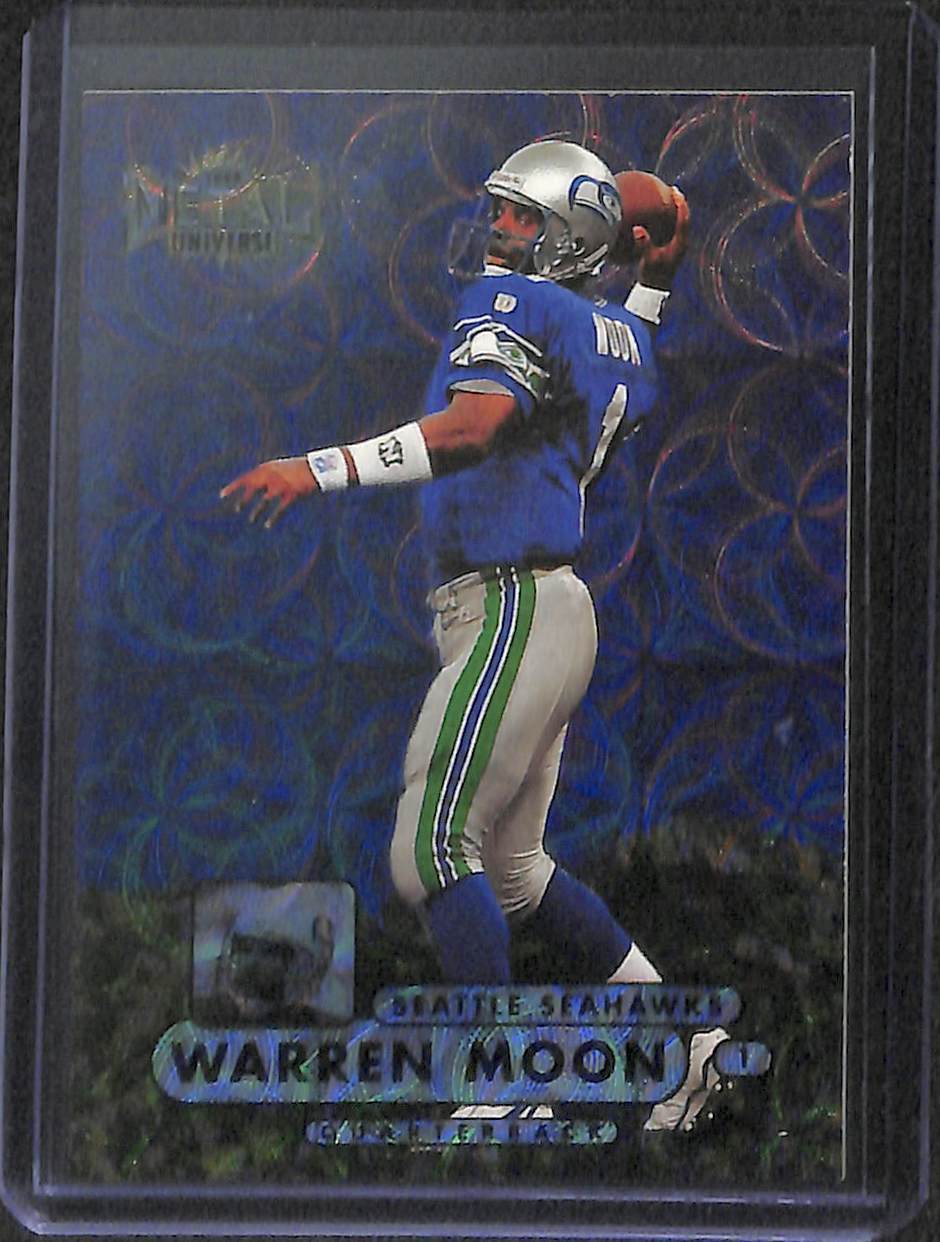 One of the most iconic and valuable card sets of all time, Skybox Metal Universe Precious Metal Gems, did dip its toe into the NFL for a few seasons. That created this beauty of a card numbered to just 50, making it one of Moon’s rarest and most expensive cards.

1998 was Warren Moon’s last full season in the NFL which he spent with the Seattle Seahawks only playing in 10 games. Not the most fairy tale ending to a career but thank goodness he was around one more year so he could make it into an all-time set like this.

The first 2000s entry on our list is the 2020 Prizm Warren Moon auto. Panini Prizm is one of the best football products every year and it is pretty cool that they still have Hall of Famers that will sign for their new product.

Any autograph card is a great one to have but with the nice design of 2020 Prizm and that beautiful look the cards always have, this is a must-buy for any Warren Moon collector and can be had for a fairly reasonable price. 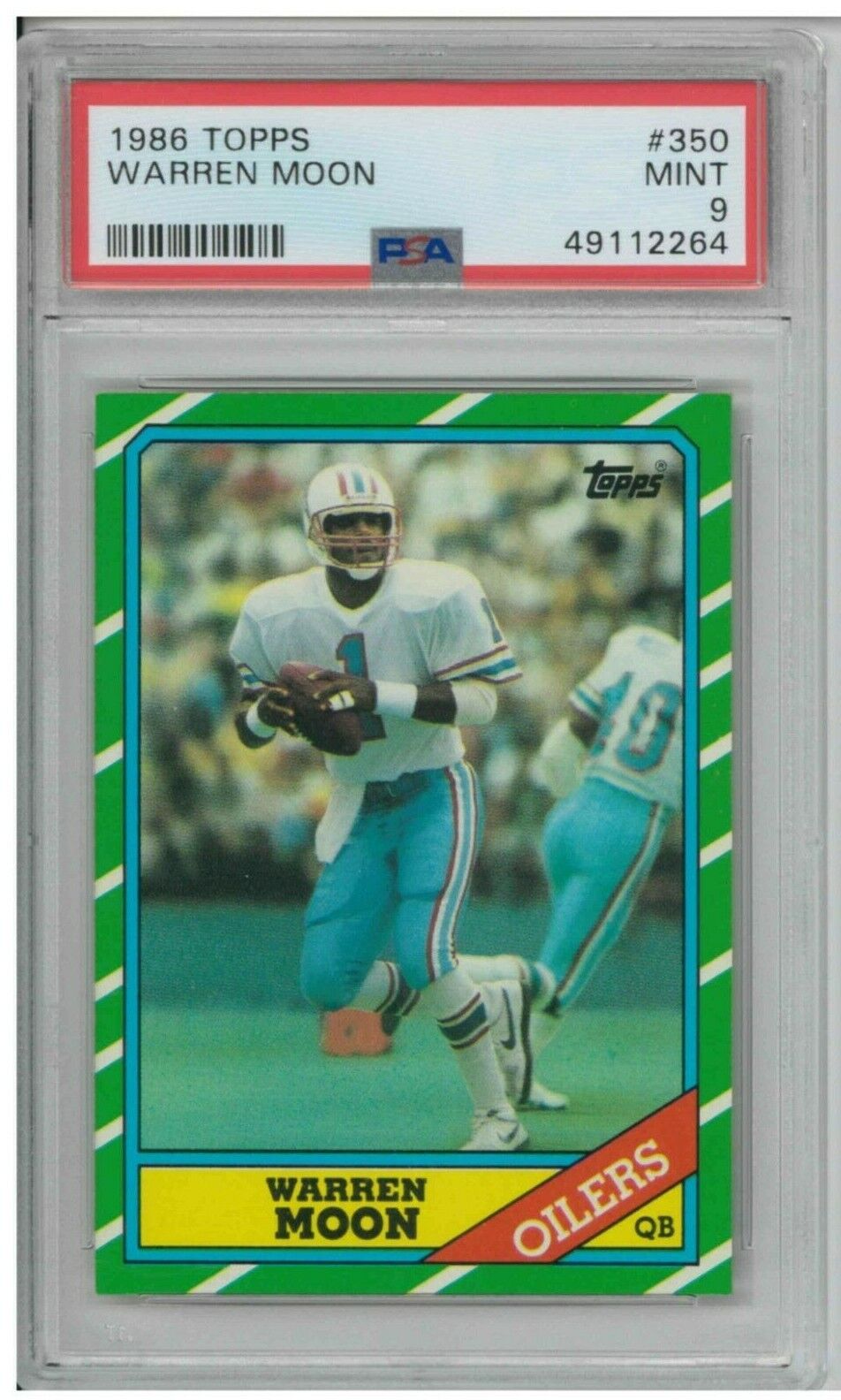 Moon followed up an incredible rookie season with a brilliant sophomore campaign. He threw for almost 3500 yards, but the Oilers were not so good. That season they went a measly 5-11 meaning Warren would have to wait three years before having a winning season. 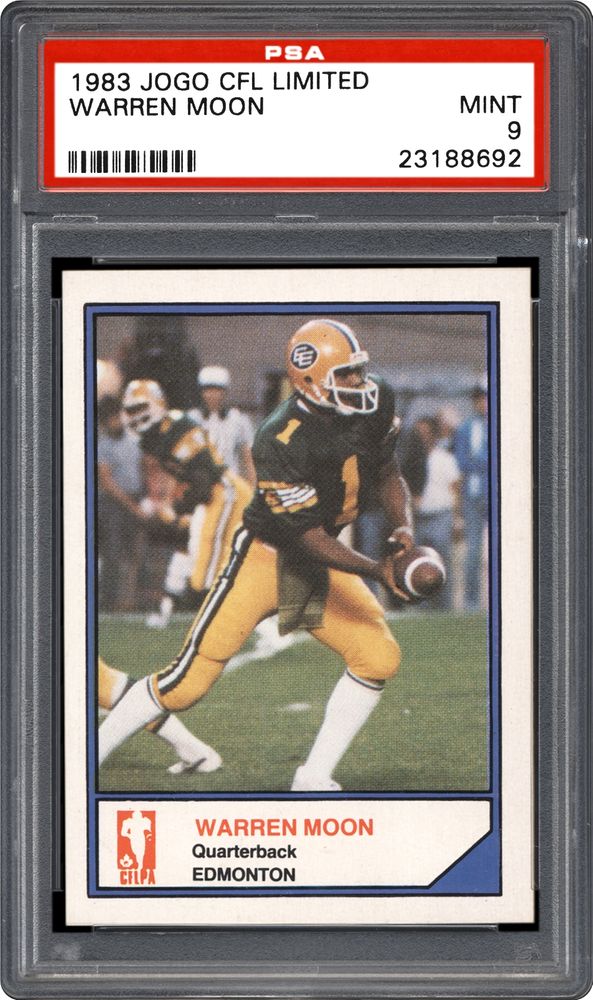 Jogo is the set you have to turn to if you want to get your hands on any pre-NFL Warren Moon cards. This 1983 Jogo is technically Moon’s third-year card, however, it is the first time Warren appears on a card in color making it a pseudo-rookie.

These Jogo cards are hard to come by and have low pop counts meaning that they are a safe bet as an investment piece. Moon has very few pre-NFL cards and his CFL career was an important part of his football career. There is a rare Topps CFL set as well from this year that Moon makes an appearance in. 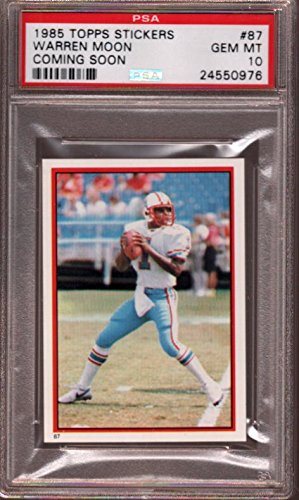 If you are looking for a slightly cheaper option in order to get your hands on an NFL Warren Moon rookie card then look no further. The 1985 Topps Stickers set features Moon in his rookie year in a brilliant photo of him dropping back to pass.

Gold Card Pro Tip: Almost never find yourself purchasing a raw card (no grade)… it is a losing lotto ticket.

These cards are pretty cheap for a rookie of an all-time great so if you are a Warren Moon collector and don’t have one of these or just want to snag one of his rookies for your PC this is your sign to do it. 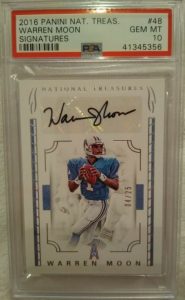 One of the most high-end products on the market, National Treasures is an annual release from Panini that often features high-end patch cards and autos. This 2016 Warren Moon signature to 25 is a gorgeous card. The elegant flair we expect from National Treasures alongside a sticker auto with Warren’s clean signature.

We like the design of the 2016 and the nice action shot of Moon they paired with it the most and it is our second entry for a 2000s card. 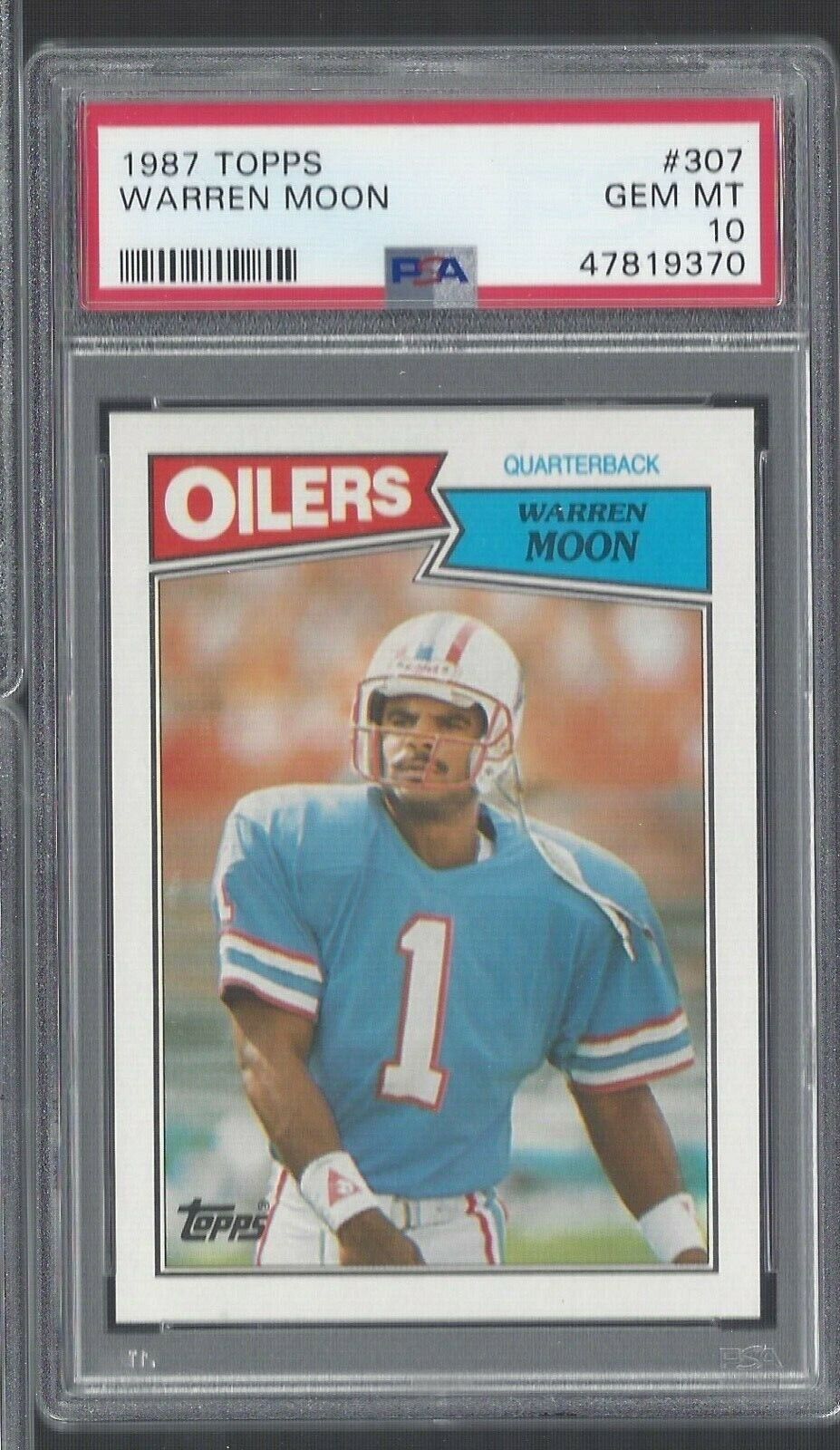 The third installment of Warren from Topps is next on our list. 1987 Topps Football has a really clean design and has another great shot of Moon in action. By this point, Moon was a well-established player in the league and the face of the Oilers franchise.

1987 would mark the first year in Warren’s NFL career he would finish the season with a winning record. While it was by no means his best season it still marks an important milestone in his career.

This card is also from the final years of Warren Moon’s illustrious career. The card showcases Moon mid-throw and dawning a Seahawks uniform.

Cards from iconic sets of Hall of Famers always do a good job of holding value down the road, even if it is from the twilight of The Player’s career.

SP Authentic is another iconic set that did a crossover with football for a little while and produced some really nice cards.

Here is everything you ever wanted to know about Warren Moon football card values.

This one is not crystal clear but we believe a PSA 10 graded 2015 Warren Moon Panini Flawless Emerald Game-Used Dual Patch Auto /5 would take second place in terms of value.

Warren Moon is one of the most recognized and beloved quarterbacks from the pre-2000s. Moon was the face of the Oilers franchise and is widely attached to that now changed team name and logo. When people think of the Houston Oilers they think of Warren Moon.

Players like Moon are great to invest in because they have a large fanbase and their cards hold value really well in the long term. Warren Moon cards aren’t through the roof expensive and won’t ever really be, but they are good buys to add to an investment collection.

Moon’s cards won’t see massive jumps in value but should see steady increases over time. Think of these cards as something you can invest in and put in the closet for 15 years forget about and then sell for a nice profit.

Before investing be sure to check out our How to Invest In Sports Cards article.