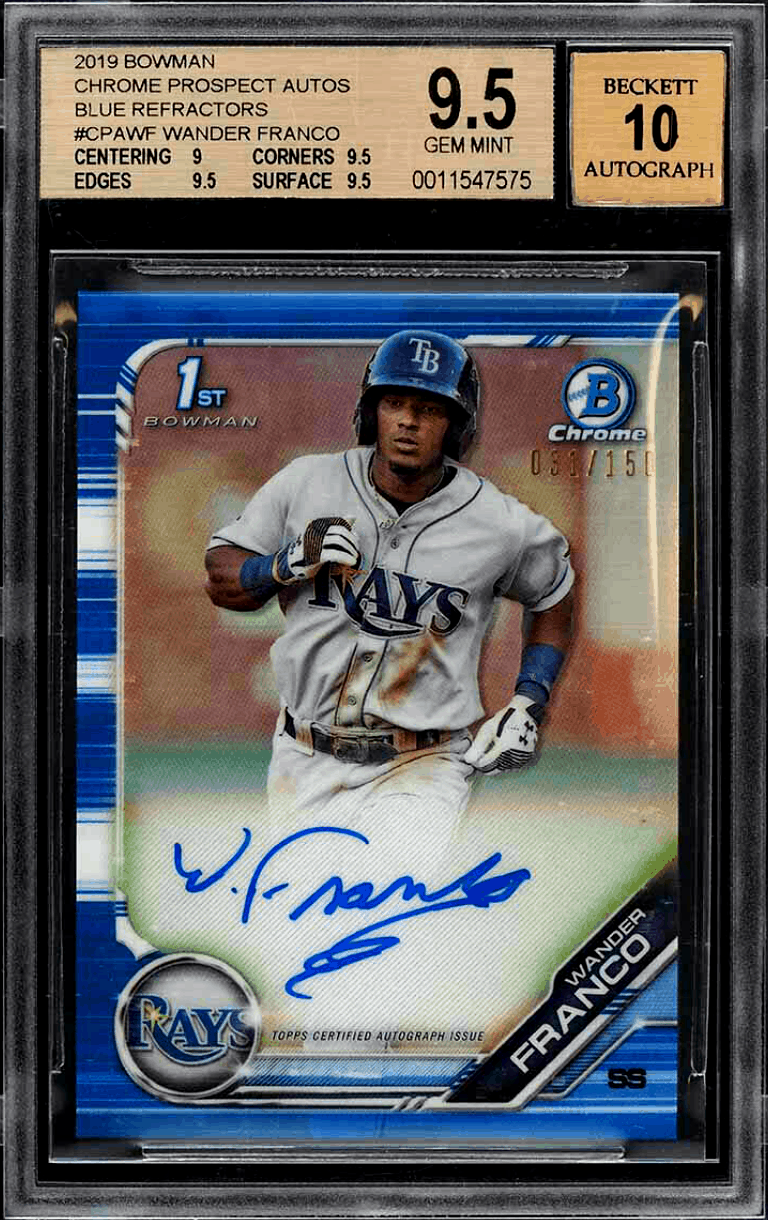 Wander Franco is the top prospect in the Tampa Bay Rays organization and has more talent at the age of 18 than Vlad Jr. had in his little toe. When he signed in 2017 he was rated as the top international prospect (Dominican Republic) at the time.

Franco has been ranked by MLB.com as the top prospect in the Rays organization for the past two years (2018 and 2019). When he was signed in 2017, Franco immediately became Ray’s eighth-ranked prospect. It is understandable that his cards are a hot commodity right now.

Bowman Chrome Baseball cards dive deeper into the game’s best prospects more so than any other trading card company.

The 2019 Wander Franco Bowman Chrome RC will surely be looked at as his most popular and possibly most valuable (depending on the version) of all of his rookie cards.

Wander Franco is rounding the bases after what we are assuming was a monster home run in this Bowman Chrome card.

The 2019 Wander Franco Bowman Chrome rookie card a must-have for any collector looking for a great return with low risk. 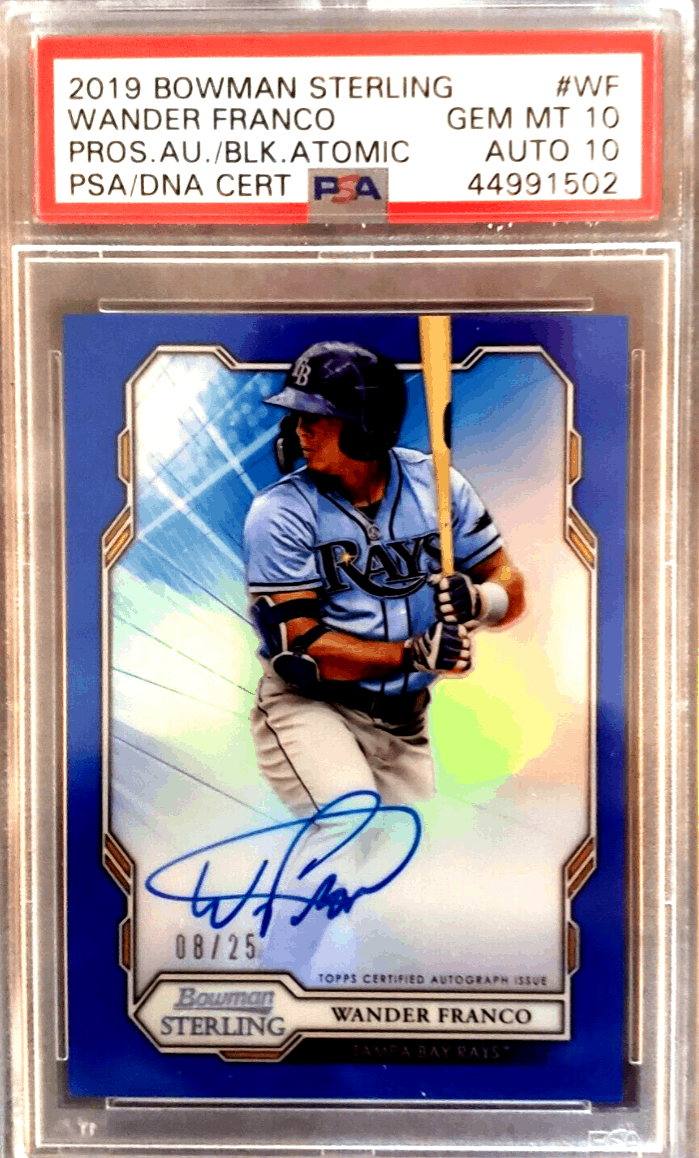 The card features Wander in mid-stance in what we can assume to be a home run ball… incoming!

The back of the card simply reads “CONGRATULATIONS, you have just received an autograph card of Wander Franco”.

This guy is a better prospect than Vlad Jr. (yea we went there). 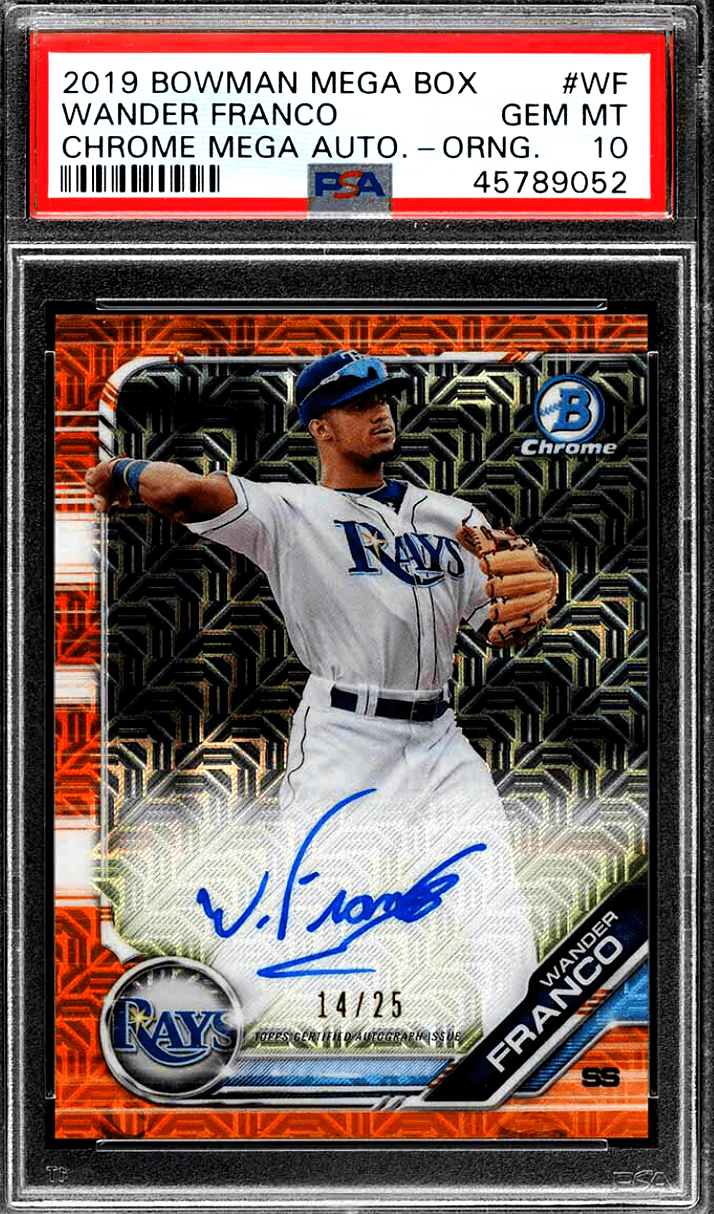 Only 25 of each color parallels were made so good luck getting your hot little hand son one.

Numbered #WF the card features Wander casually tossing the ball back into the infield… not the best photo in the world but the card graphics make up for it… love the colors as well… the Orange and Gold are stunningly beautiful. 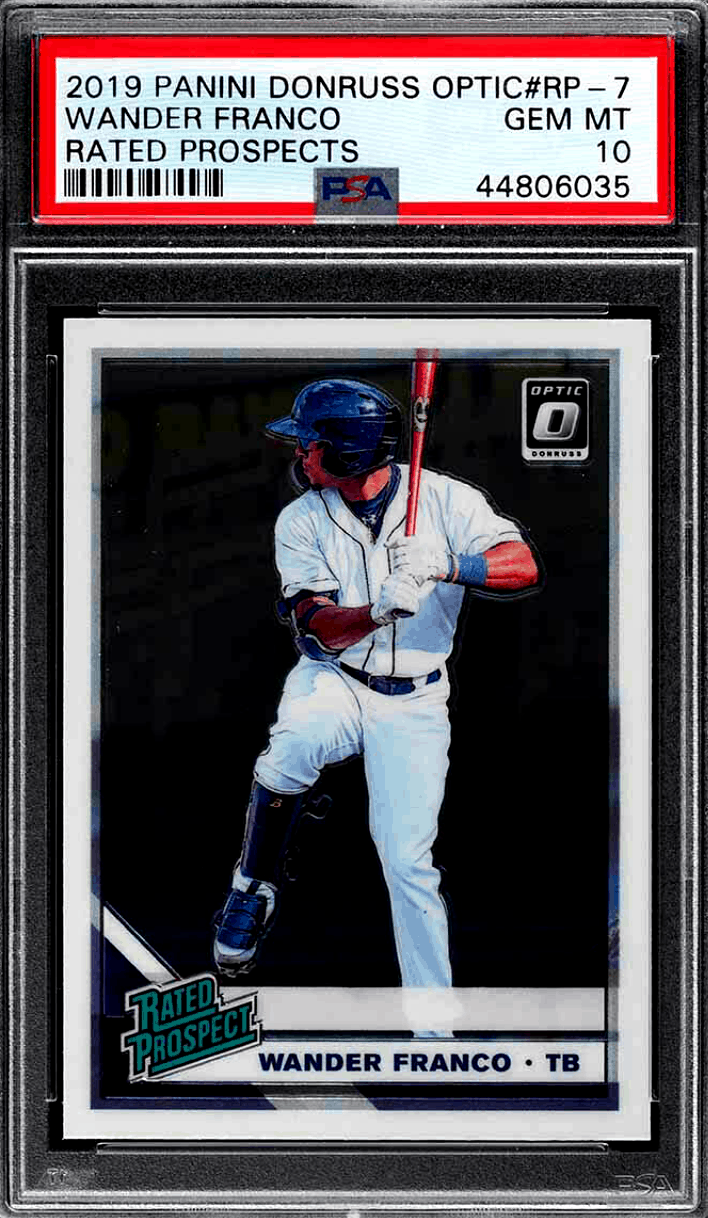 Here is a Wander Franco RC that is extremely undervalued in our opinion… this Optic RC can be had at high grades for a ridiculously low amount of coin.

Numbered #RP-7 the card shows Wander at the plate, leg cocked, locked in, and ready to launch!… an extremely cool looking photo with the “Rated Prospect” graphic (which we love)… the only problem is the card won’t come around that often on auctions. 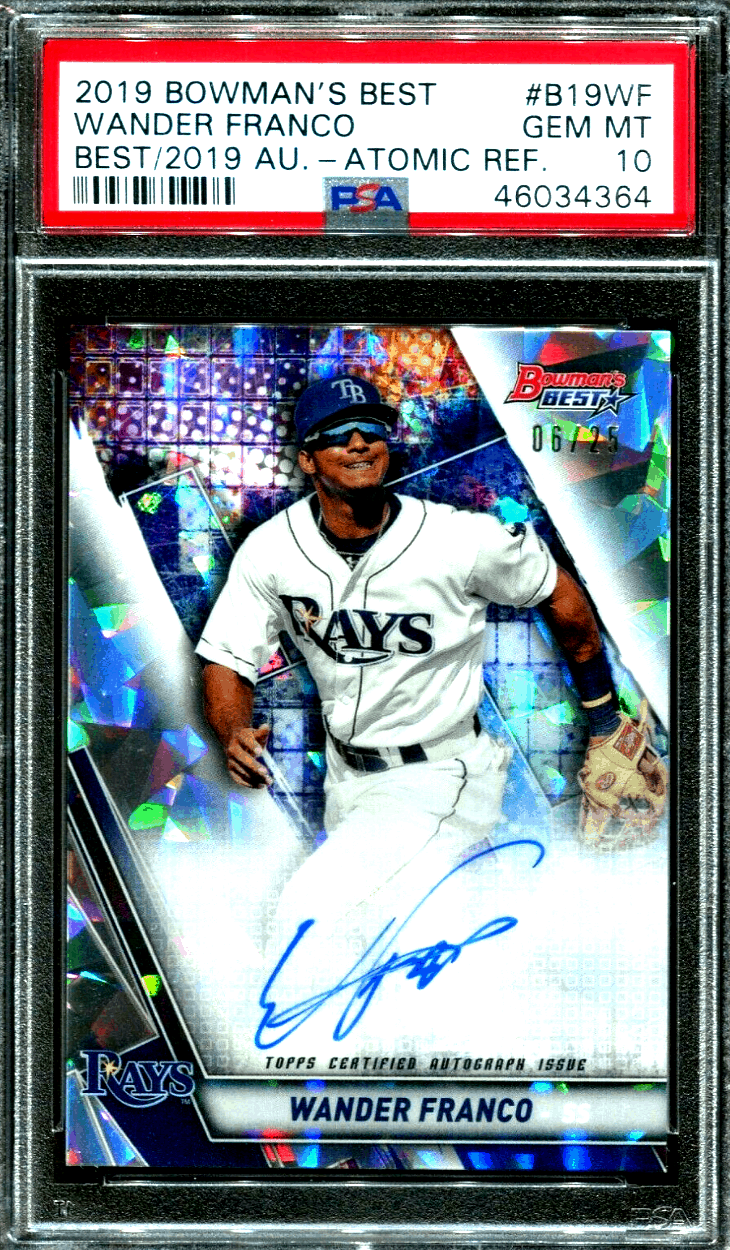 The last card on our list is the Wander Franco Bowman’s Best rookie card… not the most popular rookie card but DAMN good looking… we won’t ever buy one but if you don’t it won’t negatively affect your ROI. 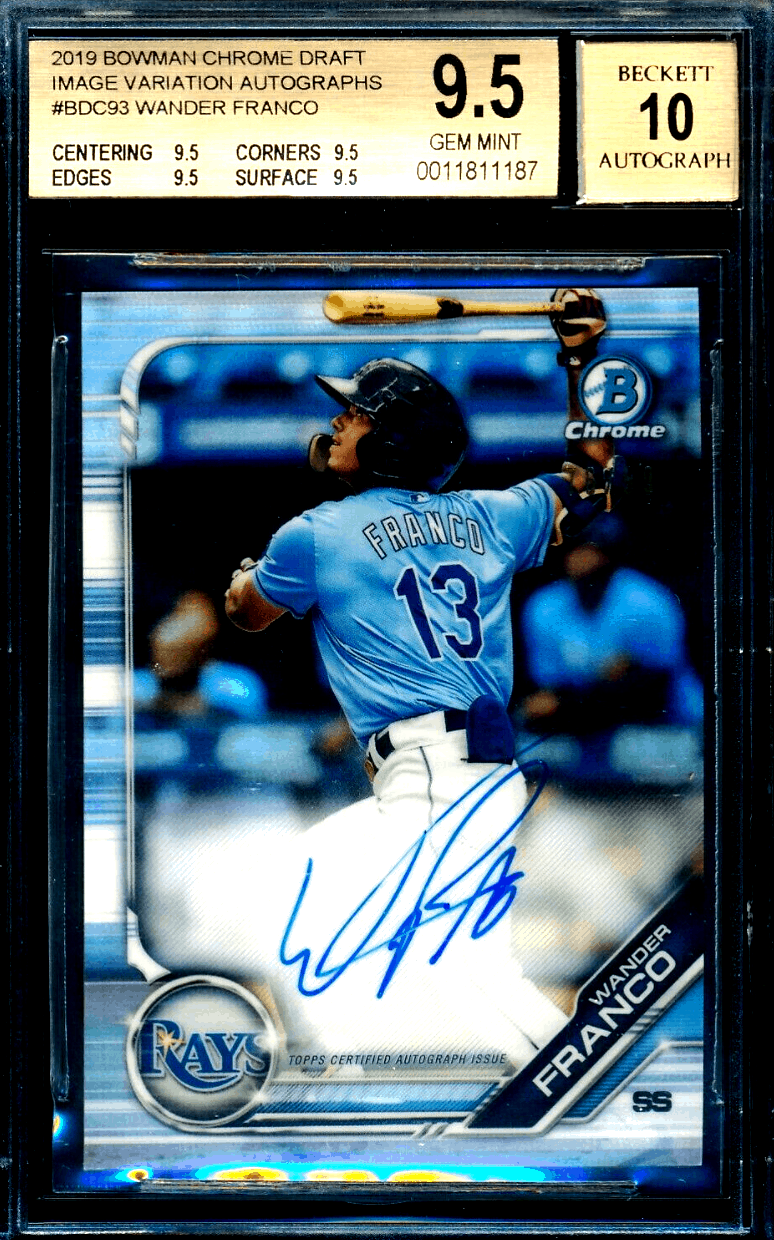 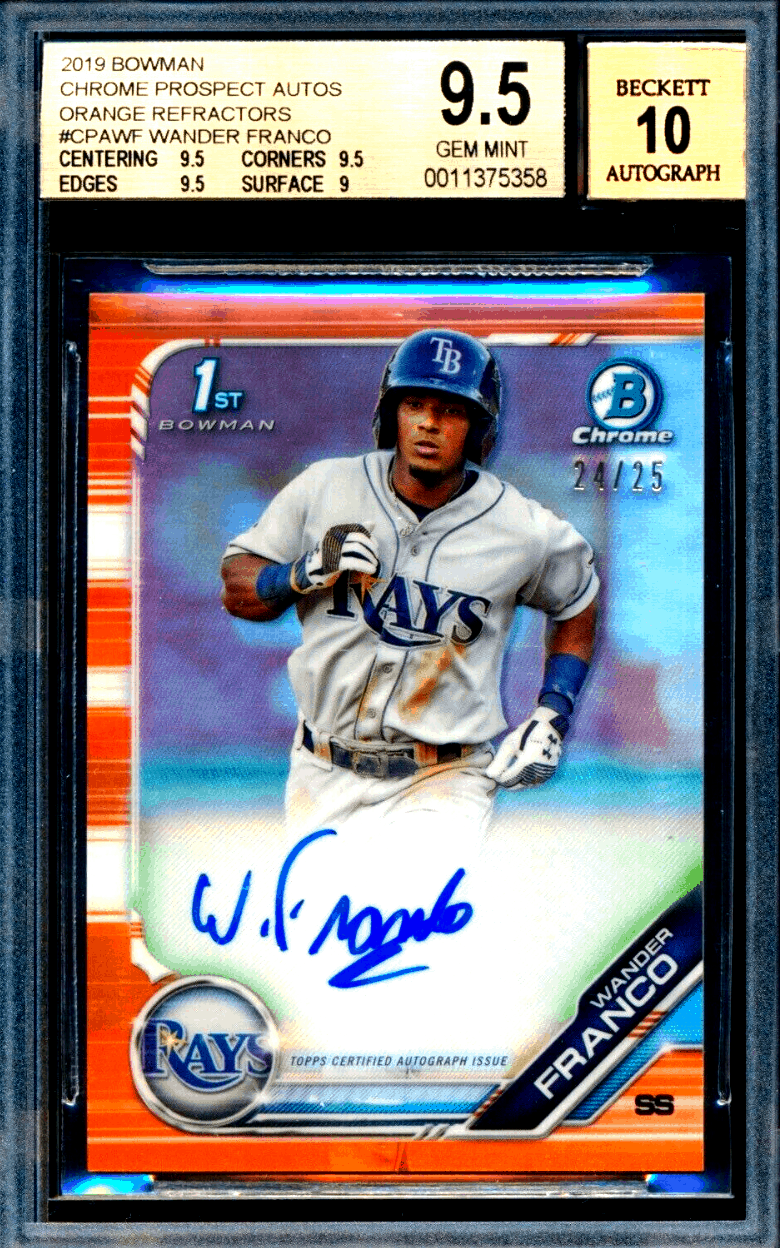 Franco rookie cards (like many prospects) can range greatly in value.

Some Wander Franco cards can go for a few dollars while the 2019 Bowman Chrome Wander Franco Superfractor Autograph sold somewhere between $60,000 and $100,000 according to people close to the sale.

We wouldn’t go cheap on Wander cards but wouldn’t pay thousands either.

Investing in a few Wander Franco Bowman Chrome refractors or autos would be a smart play.

If you have any Wander Franco RC and would an estimated value please email us at value@goldcardauctions.com (include a few photos).

If you are open the brink of buying a Franco rookie card but want a second opinion DM us on the Gold Card Auctions Facebook Page and we will provide guidance (avoid buyers remorse!).

It is being reported that Wander is a better prospect than Vlad Jr. (and maybe Luis Robert?) was at the same age and had more power.

Not only does Wander have power but he should also hit for a fairly high average (think .300 or higher)… we could see many years with a plus .300 average and 30 jacks or more… yummy.

That being said now is the time to start hoarding Wander Franco rookie cards as it is very likely they will only increase in value in the run-up to his MLB debut (which is expected to be sometime in the Summer of 2020).