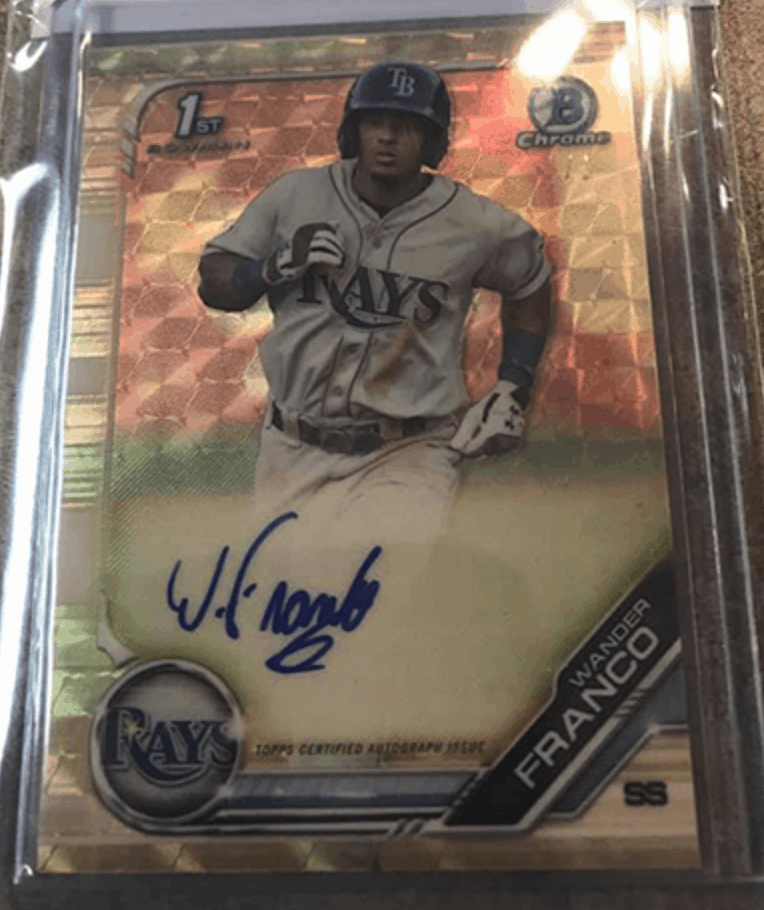 A lot of factors go into determining a card’s investment potential. To know if the 2019 Wander Franco Rookie Card Bowman Superfractor belongs at the top of the list, we’ll have to look at three things: Franco’s potential, the current market for the card, and the card itself.

Please note the Wander Franco Superfractor card is extremely rare and super expensive.  BUT a refractor is just as good… buy a Wander Franco Refractor Rookie Card on eBay!

First, let’s talk about Wander Franco. Though he’s still in the minor league system with the Tampa Bay Rays, Wander Franco has been putting up numbers that promise superstardom. Not only is his slash line .318/.390/.506 this year, he has an OBP of .408 and SLG of .566 over the past two years. He’s also been named to the 2019 All-Star Futures Game. So you know he’s not just a flash in the pan. Pretty impressive stuff from someone barely 18 years old.

His talent isn’t the only reason for interest in his card as an investment. The market for his signed Bowman superfractor is absolutely exploding right now. Recently, it was sold privately for a reported $60,000 to $100,000. Numbers like that make you wonder what the value will be once he’s actually in the pros and everyone else knows his name.

From a purely economic point of view, Wander’s 2019 Bowman Superfractor has everything you want in an investment. Its rarity means the supply is low, but the insane numbers it’s already selling for mean the demand is through the roof.

Let’s face it the odds of us or you owning this card are slim to none!

BUT… we can buy the standard Wander Franco Bowman Chrome rookie card.

We like this idea much more as it is cheaper and won’t hurt as bad if this kid flops.

The best Wander Franco investment right now is his Bowman Chrome card which is available in a variety of formats (auto, refractor, superfractor, etc.).

Like we said we would just buy his standard Chrome card…

His 2019 Bowman Chrome card is a great long term investment.

Of if you have a little more money to spend purchase a buy Wander Franco Auto on eBay.

The last thing to consider is the card itself. The foiling is beautiful but not overpowering enough to dominate the card. His signature is strong. And the art is powerful and suggestive of progress and promise. He’s not just running the bases. Wander Franco is running into history.

Anyone who can invest in this jaw-dropping 2019 Wander Franco Bowman Superfractor is likely going to be very happy as the years roll on.