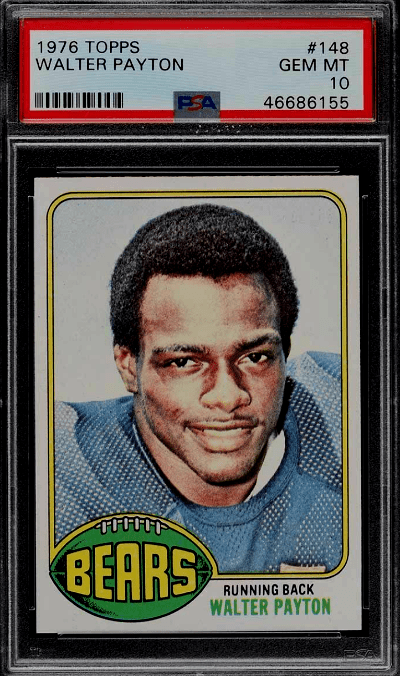 Walter Peyton (1954-1999) was widely regarded as one of the greatest football players of all time, as well as being one of the nicest guys in the sport. Known as “Sweetness”, it’s easy to see why the NFL Man of the Year Trophy was named in his honor.

He held records for career rushing yards, touchdowns, carries, yards from scrimmage, and all-purpose yards following his retirement, and made it into the NFL 100th Anniversary All-Time Team in 2019.

Here’s a roundup containing three of the best Walter Peyton football cards, including investment advice for the next few years.

The ‘best’ Peyton card is obviously subjective unless you’re basing it purely on values or interest. Collectors, fans, and investors tend to prefer his earlier options from the 1970s, so that’s where we’ll begin.

The undisputed king of Payton collectibles is his 1976 Topps RC. At first glance, it’s a somewhat basic card, with a simple profile shot of the player with a wry smile. It uses a green and yellow color scheme, fitting in well with the Bears logo in the bottom corner.

A PSA 5 version can be grabbed for roughly $250, while a gem mint edition recently sold for $76,099. This means that you’ll be able to add the card to your collection, but there’s a massive premium to be paid for the very best versions. 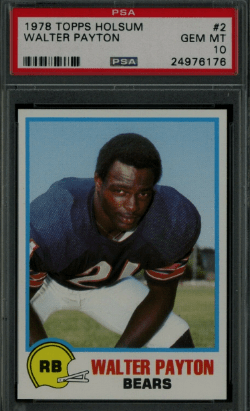 A bit of a strange one, this originated when Topps produced a 33-card set for Holsum Bread in 1978, featuring players across the NFL. Luckily, there are no loaves to be seen, and it’s far rarer than you might expect.

The image of Payton sees him crouched over, with a semi-serious expression on his face. There are no logos on the front, aside from a small football helmet that notes his position as an RB. 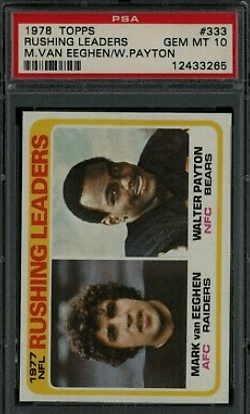 We always prefer a solo card as opposed to the multi-player options that were available in the 1970s and ‘80s. However, we’ll make an exception for the 1978 Topps Rushing Leaders release, which also featured two-time Super Bowl champion Mark van Eeghen.

He and Peyton are pictured side by side in separate profile shots. There are only five PSA 10 copies according to their registry, and it has a current SMR price of $550. That was smashed in a recent sale, as the gem mint copy went for just over $2,100. 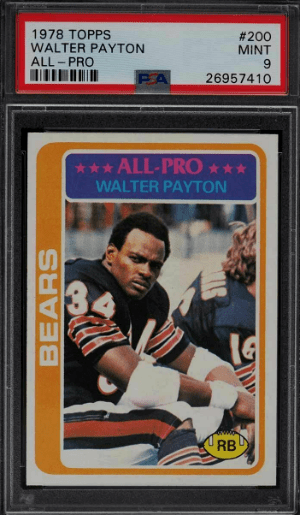 Not looking to spend a ton of money? Check out the 1978 Topps Football Walter Payton ALL-PRO football card #200 as you can obtain this card at high grades without breaking the bank.

Do you have a Walter Payton football card and want an estimated value? Comments below, DM us on the Gold Card Auctions FB page, or email value@goldcardauctions.com.

Thinking about purchasing a Walter Payton rookie card (football card) and want to talk it over? Contact us on Facebook or email advice@goldcardauctions.com.

Peyton is a legend in every sense of the term, and he’s still an icon today. His tragic death has only helped to enhance his legacy, and he’s one of the best football players from his era to invest in, whatever your budget may be.

The truth is, you’ll struggle to match the values seen with his earliest cards. Even signed versions from later years such as the 1992 Upper Deck Heroes Autograph, which has a print run of 2,800, is worth a fraction of the amount when compared to the best copies of his original RC from 1978.

We’d stick to the best possible grades (read: Beckett Grading or PSA Grading or SGC Grading), while options like the Holsum card allow for a more manageable outlay. You can’t go wrong with any of his late 1970’s releases, and prices have risen over the last few years. If the market remains steady, so will the climb in prices. 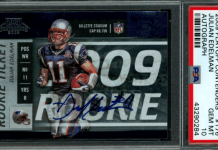 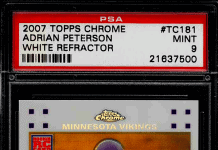