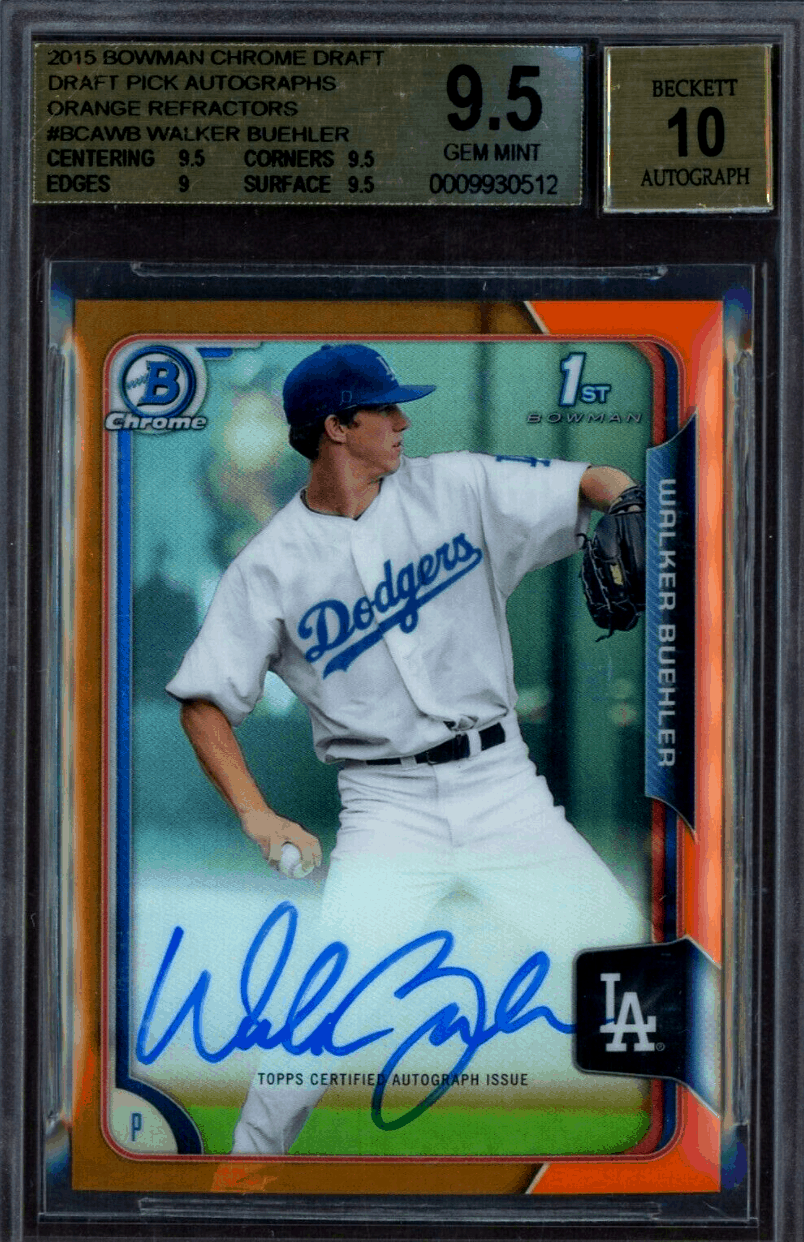 In his first MLB season, he finished 3rd in rookie of the year voting and posted a down-right filthy 2.63 ERA with 151 strikeouts (9.9k per 9)… how in the world did he finish third in ROY voting you might ask!?… oh he went against batting studs Ronald Acuna Jr. and Juan Soto (talk about a sick ROY class).

Buehler should be one of the better pitchers in the league for years to come (along with Jack Flaherty) making his rookie cards pretty cheap at these prices (even for a pitcher). 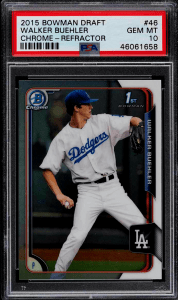 By far our favorite Buehler rookie card for investment purposes. The 2015 Walker Buehler Bowman Draft Chrome rookie card is numbered #46 and shows Walker tossing the ball in what appears to be a light warm-up session.

Available in a number of refractors parallels the reverse of the card reads “Pitched Vanderbilt into two consecutive College World Series trips in 2014 and ’15… started NCAA Title Game as a sophomore…Struck out more than one per inning in ’15. Throws mid 90’s fastball with great control… Keeps ball down in the zone… Can also lean on curve, slider, and change up” 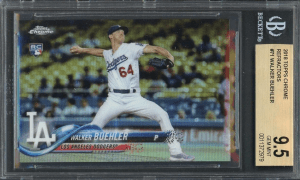 Topps is known for throwing in a parallel card every so often and that’s what they did with the Buehler Topps Chrome rookie card.

A great looking card showing Buehler about to release the ball down the pipe for what we imagine is a foolhardy swing and miss.

Numbered #71 the reverse of the card reads “The Dodgers drafted Buehler early in 2015 knowing that the former Vanderbilt Ace would need Tommy John surgery before he even threw another pitch. Their faith was validated, as the 100-mph-throwing righty averaged 12.7 Ks/9 IP over three levels of farms in ’17. Promoted late in the year, he fired two scoreless innings in his MLB debut on Sep 7” 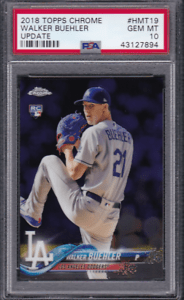 Another good looking Walker Buehler Topps rookie card showing him in mid-windup with a look on his face that seems to be saying “yea I got this clown”.

The card is numbered #HMT19 and the reverse reads the same as the #71 card above.

One of these years Buehler is going to put together a full season of dominance (Cy Young award incoming?) and his rookie card prices are going to take off.

If you have a Walker Buehler rookie card and would like an estimated price please email us at value@goldcardauctions (include two photos at minimum). 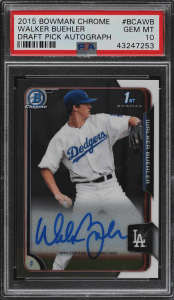 Buehler has shown streaks of greatness but has never put together an entire season of it. We feel either this year or next, you will see him emerge as one of the top pitchers in the game and win the CY Young Award (any maybe even a World Series ring… the Dodgers (related: Cody Bellinger Rookie Cards) deserve one after being beat by a trash can in 2017).

We own a couple of his 2015 Bowman Chrome refractor cards and are looking to add a few more.