Wade Boggs Rookie Year stats are as follows: 104 games, 5 homers, 44 RBI, and a mind-blowing .349 batting average (plus 72 beers on a red-eye from New York to Los Angeles)… yep this kid had game, buying a Wade Boggs rookie card back then would have paid off nicely, to say the least.

You may think 118 home runs is on the low side but remember this was in a time when players cared more about getting on base (i.e. average) than the long ball.

Let’s check out the top-rated Wade Boggs RCs from an investment perspective. 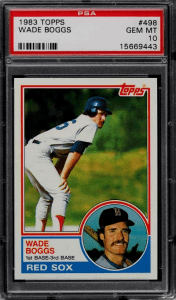 The 1983 Topps Wade Boggs RC is the cream of the crop and a must for those interested in backing Boggs with some dinero.

Looking for the best Wade Boggs card? The 1983 Topps rookie card is it!

Numbered #498 the card shows Boggs getting a lead off second base in hopes of turning a possible base hit into an RBI. His name, team name, and position are all snugged away in the bottom left corner while a yearbook style closeup of his face sits in the bottom right. 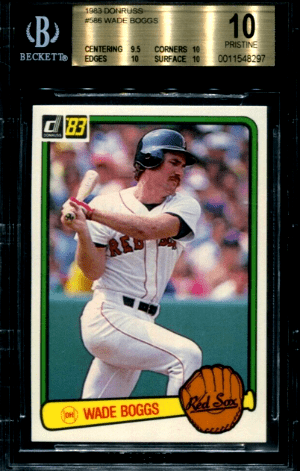 Next on our list is the 83′ Donruss Boggs Rc which is another SOLID purchase for Boggs RC buyers. Numbered #586 (man you don’t see that high of a number anymore do you) the card shows Boggs slapping the ball down the 1st baseline for an easy single.

His name is placed within a yellow baseball bat while “Red Sox” is placed within a brown baseball glove. The Donruss logo with the year 83′ finds its way in the top right corner… a nice little card that will cost just a shade less than the Topps RC. 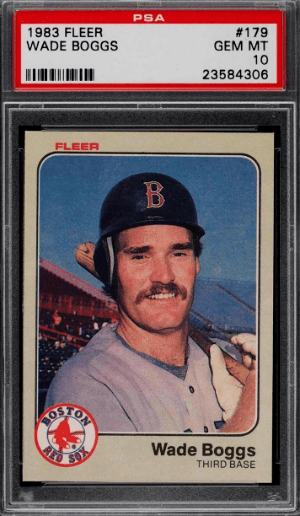 The last Boggs card (RC) on the list is the 1983 Boggs Fleer rookie card. Is it us or does Wade look the same age in any picture from any year? He looks like a divorce, late thirties, manager at a Kinkos… just trolling ya Boggs (but it’s true haha OUCH).

Numbered #179 the card shows an aging Boggs with the bat slung over his right shoulder. His name and position are placed in the bottom right and the Red Sox logo in the bottom left… a decent card for those looking to spend a little less but still walk away with a solid investment (long-term). 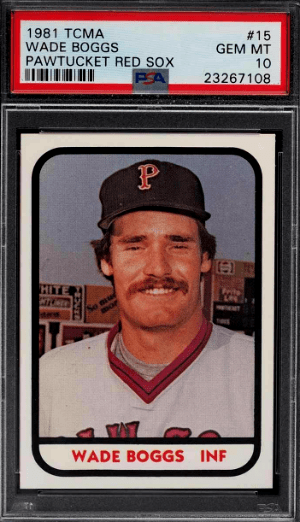 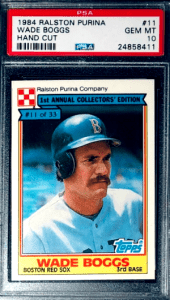 Least expensive? Check out the 1984 Wade Boggs Topps Ralston Purina RC which will sell around $5 to $10 at high grades.

Buying a Wade Boggs rookie card is similar to buying the most boring stock on the S&P 500… buy it and hold it for a long, LONG time and make a good coin. You won’t be doing any quick GAMESTOP like flipping on a Boggs RC that’s for sure.

Are we buying Boggs? Probably not as we like other older boring players from that time a little more (i.e. Greg Maddux rookie cards) but if you Wade Boggs fan or simply want a boring investment that will provide solid year over year returns Boggs RC are a no-risk, solid buy.