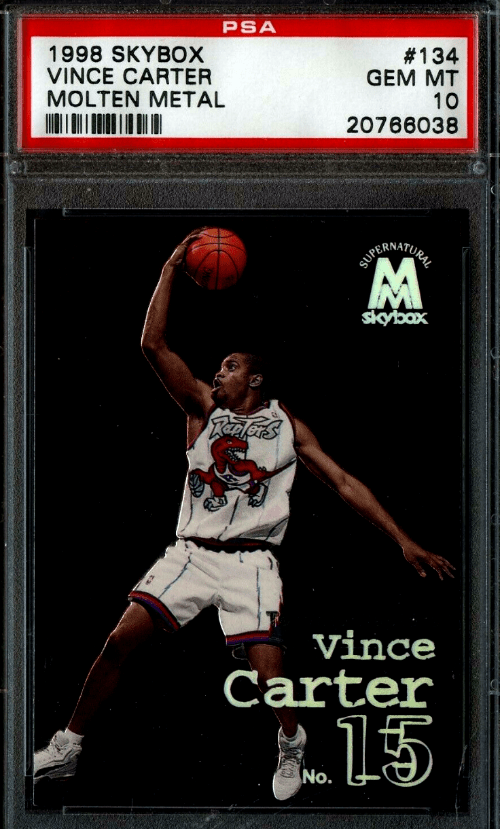 Vince Carter (01/26/77) is a former shooting guard/small forward who is the only player in NBA history to have played in four decades over a 22-year career.

Confused? His rookie year was in 1999 with the Toronto Raptors, while he finally called time in 2020.

An eight-time All-Star and the Rookie of the Year in ‘99, he never won an NBA Championship, but he did set multiple records thanks to his skills and longevity.

Here are three of the best Vince Carter rookie cards, along with investment advice following his retirement from the sport.

Carter’s 1998-99 options are what we’re looking at here. There are 27 RCs to choose from altogether, and that’s without including various parallels. We’ve narrowed it down to three of the best overall.

First up is a card that is sure to catch the eye. SkyBox’s Molten Metal set has an all-black background, with a great image of the player as he appears to soar towards the sky with a ball in one outstretched hand.

It has a foil finish, and the player name is written in a font that is the so late ‘90s that it’s almost painful to look at.

There’s also a rarer Xplosion parallel, but either version is popular with collectors. 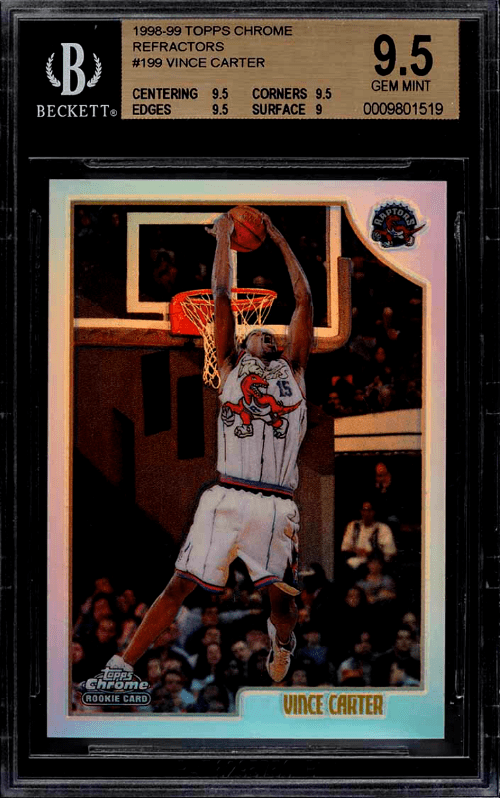 The base version might be plentiful, but the 1998-99 Topps Chrome Carter card is a clear step up in a number of respects. It has a shiny finish, while they’ve opted for a crisp silver border.

The image sees Carter leaping for a dunk in a great action shot. It’s already expensive compared to the majority of his RCs, and that’s without considering the rarer Refractor parallel. If you want one of the best cards in terms of value and prestige, look no further. 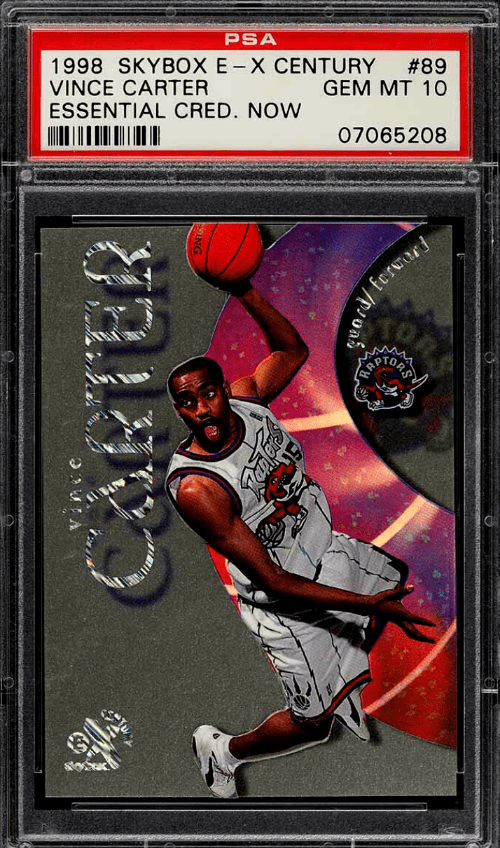 On the subject of value and prestige, there’s Carter’s card from the 1998-99 E-X Century Basketball set. It’s already considered to be an SP, while there’s a ‘Credentials Now’ parallel which is numbered to just 89 copies. Gem mint versions will sell for four figures, making it a desirable option.

In terms of design, it’s distinctly different from the dark cards seen above. It’s pretty cluttered, while there’s a shadow effect on his name which looks like it was made in, well, 1998. The image of the player is slightly skewed, and it looks like the top of his head was lopped off ever so slightly. Regardless, the shiny parallel versions look much better, especially when checking out the 3D effect.

If you are looking to purchase a Vince Carter rookie card and would like some advice please email advice@goldcardauctions.com.

If you have a Vince Carter basketball card and would like an estimated value please email value@goldcardauctions.com. 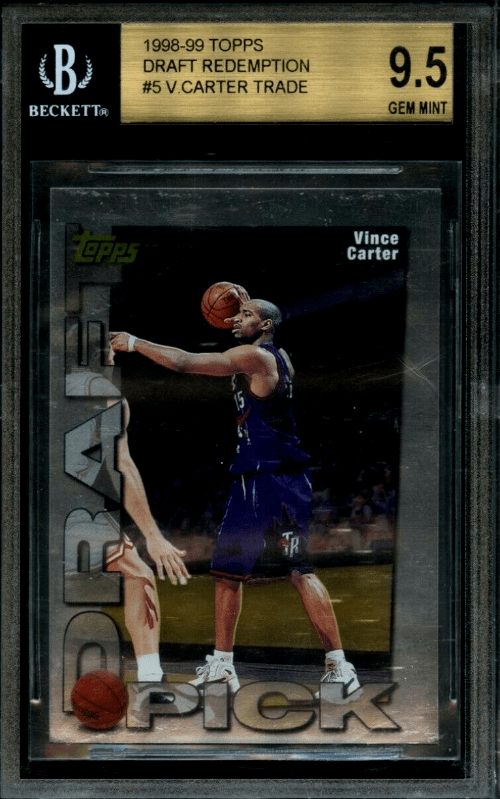 Carter was pipped to be Michael Jordan’s successor in the past, such as the level of hype surrounding him in the late 1990s.

He never really managed to live up to ‘His Airness’, while he failed to win an NBA Championship, but he still set records that are likely to stand for the foreseeable future.

After all, hardly anyone can compare to Jordan career-wise, and Carter’s is more than adequate enough to stand on its own merits. He’s set to join ESPN as a full-time NBA analyst in 2020, so it’s not like he’s going to be out of the public eye for any significant period of time.

It’s worth noting that injuries are seen as the main reason why he failed to fulfill his potential, while he never went chasing rings towards the end, as so many others have attempted to do. He dedicated the later stages of his career to helping others, which is one of the reasons why it was so easy for teams to continue to select him despite his advancing years.

His more valuable RCs are sure to shoot up in price following his retirement in 2020, while he’s likely to find his way into the Hall of Fame at some point. This will also help to improve Carter’s card values, so they could be a good investment piece as long as you’re willing to wait for as long as that takes.

Considering everything, now could be the best time to buy, before prices begin to rise too sharply. A high-grade version of one of the rarer cards is sure to hold value at the very least, so it’s a risk-free investment if you think he’ll be selected by The Naismith Memorial after the three-season waiting period.