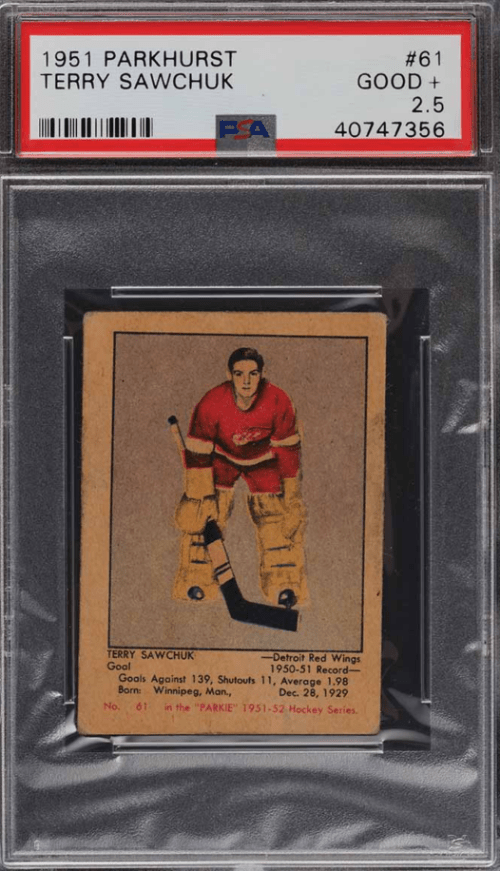 Hockey memorabilia might not be the first collectible you’d think of from the 1950s, especially compared to baseball cards from the same era. However, there’s a not-insignificant market for some of the rarer options, which are extremely difficult to find in higher PSA grades.

Related: Most Valuable Hockey Cards from the 80s

Here’s a rundown with seven of the most valuable hockey cards from the ‘50s, with lots of info about the player, card values, and how they managed to make it onto the list.

7 Valuable Hockey Cards from the 1950s 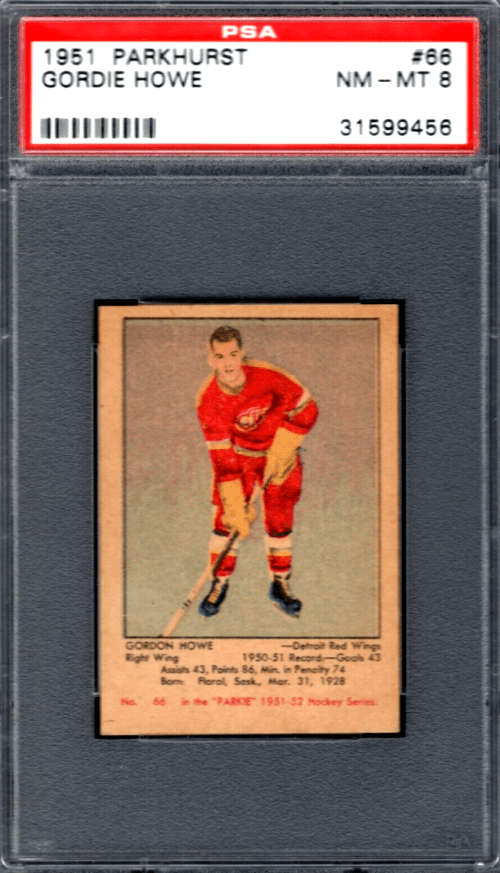 Gordie Howe was a legendary former player who earned the name ‘Mr. Hockey’. He’s a 23-time NHL All-Star, he still holds the NHL records for most games and seasons played. Howe passed away in 2016, leaving a legacy that still has a large impact on the sport today.

As the only recognized rookie card of Mr. Hockey and the key to the set, it’s easy to see how this is one of the most valuable 1950’s cards on the market. For one, the year of release plays a part, as it’s an early option. Then there’s the 1951 Parkhurst set itself, which is a basic 105-card issue with blank backs and fragile stock. It’s tough to find copies in good condition, and the same goes for many of the cards on the list.

It features a colored image of ‘Gordon Howe’, with a stick in hand. There’s a large white border and a simple blue background, while card info is located at the bottom in black text. 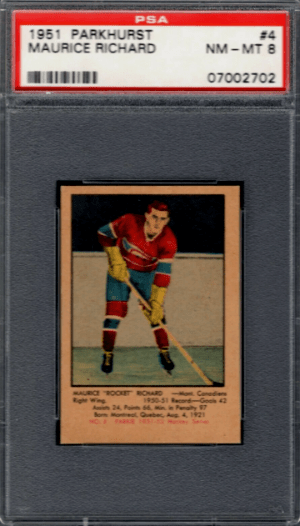 As the first player in NHL history to score 50 goals in one season, and the first to reach a tally of 500, Maurice Richard was always going to make the list. He played 18 seasons in the National Hockey League (NHL) for the Montreal Canadiens, and passed away in 2000.

Trending: Most Expensive Hockey Cards from the 1990s

Once more, this is the only recognized rookie card you’ll find containing Richard, produced in a similar style to the RC seen above. It makes sense as they’re both from the same set, although there are a few differences.

The background has slightly more detail, showing the edge of the rink, as well as the ice and a black section at the top. Otherwise, it also has a colored image of the player with a stick held in both hands, with player info found at the bottom.

A PSA 9 copy sold for $57,600 in 2019 after being put up for sale via Heritage Auctions, although that does mean that 8 grades are a lot cheaper. In any case, it’s another solid choice from the set, and one of the most valuable from the decade.

Terry Sawchuk played 21 seasons for the Detroit Red Wings, Boston Bruins, Toronto Maple Leafs, Los Angeles Kings, and the New York Rangers before his untimely death at the age of 40. He died following complications after a scuffle with Rangers teammate Ron Stewart.

Given his early passing, there’s a distinct lack of options featuring Sawchuk from later years, while it worked to increase the overall interest in his rookie card from the 1951 set. It’s prone to many of the issues found with the release, although it’s far more affordable in comparison to the duo seen above.

Sawchuk is seen as the greatest goalie in the first 50 years of the NHL, so it makes sense to see him decked out with large gloves and leg padding. It follows the same design as the others, with a color-tinted image of the Hall of Famer set against an off-white background. Player information is found at the bottom. 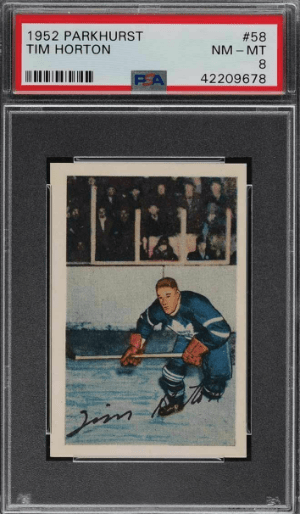 Having made 468 consecutive regular-season appearances from 1961-68, Tim Horton seemed like he could have gone on forever. The defenceman played 24 seasons in the NHL for the Toronto Maple Leafs, New York Rangers, Pittsburgh Penguins, and Buffalo Sabres, before his death following a single-vehicle crash in 1974, at the age of 44.

The 1952 Parkhurst Hockey set consists of 105 cards measuring 1-15/16” by 2-15/16”. Each card featured a color line-drawing of the respective player with a facsimile autograph, and they’re a clear step up from the 1951 release.

“It’s more affordable than the ‘51 options mentioned above, but it’s still difficult to find high PSA grades due to the age. Even so, they were printed on better card stock, and Horton’s card is one of the more valuable releases from the decade.”

Horton is shown in an action shot which is much crisper than the earlier set, against a stadium background that adds some much-needed detail to the design. A copy of his signature is found at the bottom, capping one of the better cards from the decade.

A year later saw the release of Jean Beliveau’s rookie card. Beliveau is seen as one of the greatest players of all-time, with two Hart Memorial Trophies as league MVP (1956, 1964) an Art Ross Trophy as top scorer (1956), the inaugural Conn Smythe Trophy as playoff MVP (1965), and 17 Stanley Cup championships. (He won 10 as a player and another seven as an executive vice president of the Canadiens.)

The set is seen as the pinnacle from Parkhurst in terms of the overall design, featuring a great action shot of Beliveau on the ice. The autograph is placed along the middle, while it can be susceptible to issues relating to the toning around the edges. 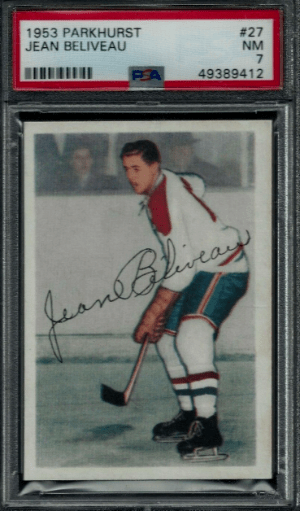 Jacques Plante won the Stanley Cup six times, including five consecutive wins with the Canadiens, and helped to promote the use of masks to protect the face following an injury. He was inducted into the Hockey Hall of Fame in 1978, sadly passing away in 1986.

The 1955 Jacques Plante Parkhurst RC is one of the cheaper options to make our list, but you’ll struggle to find anything more than a PSA 7 at a typical auction.

His RC is what we’re looking at here, with a large illustrated action shot of the player as he makes a save with an outstretched glove. As part of the ‘55 Parkhurst set, it’s the most advanced card to make the list, and it has the most detailed image. For example, you can actually make out the expression on Plante’s face, and there’s a lot of detail paid to the net that makes up much of the background.

Issues are typically found in the form of chipping along the red-bottom border, while copies are also susceptible to centering problems on this horizontal card. 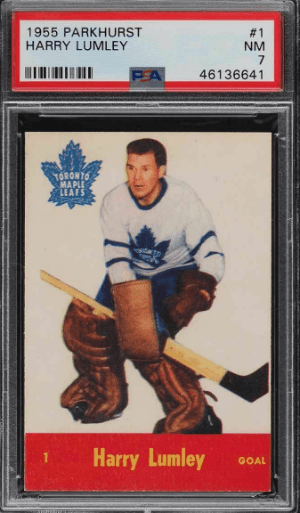 Harry “Apple Cheeks” Lumley is a goaltender who is the youngest ever to play in the NHL at the age of 17. Lumley led the Red Wings to a Stanley Cup championship in 1950, although he was later replaced by none other than Terry Sawchuk. He passed away in 1998.

As with the Plante RC mentioned above, there are lots of issues found with the first from the set. It’s horizontal rather than landscape, but it still has a red tab located at the bottom, which lists the card number, name, and position. Chipping and centering are common issues, so it’s unlikely you’ll find anything more than a PSA 7 at auction. It features an image of Lumley in full gear, set against a plain white background with no border.

7 Valuable Hockey Cards from the 1950s: Summary and Investment Outlook

Luckily, Parkie sets are smaller than newer options, while the cards still maintain a decent amount of interest from collectors and investors. The earlier you go, the more popular they become, especially when looking at the first three cards to make the list.

1950s hockey sets have a higher concentration of Hall of Fame rookie cards compared to most other decades, even when looking at different sports. It’s a great place to look for cheap Hall of Famers, but there are a number of valuable cards from the first half of the decade.