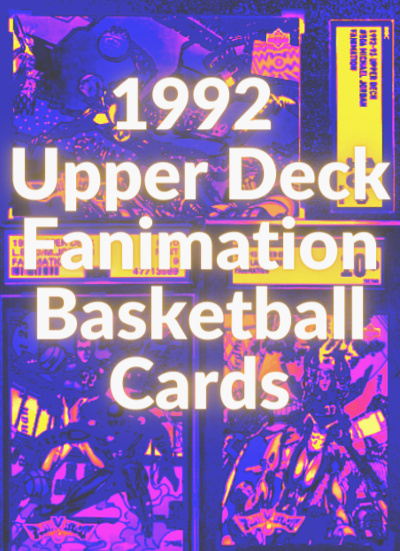 Upper Deck Fanimation trading cards have been called “Sports Cards for Insane People“, which gives you some idea of what you’re in for.

Based on the “Sports Cards for Insane People” label, you already know that these ultra-campy, superhero-themed cards are polarizing.

Say what you will about the original class of Upper Deck Fanimation entrants, but the brand long outlasted its original print run. Apparently, enough collectors saw value in this off-the-wall concept to keep Upper Deck printing more. 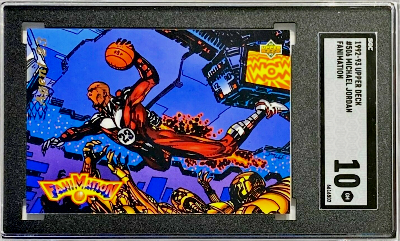 Put together any list of top basketball cards for which he is eligible, and Michael Jordan will claim the top spot on that list (top set: 2019 Prizm Basketball with Zion). Even, it seems, if he’s donning a skin-tight, bionically enhanced superhero getup.

Even Space Jam, which would arrive in theaters four years after this card’s release date, didn’t stretch the limits of imagination like this card does.

For this card, Upper Deck and Image Comics reimagined Air Jordan as Agent 23. The only recognizable features of Jordan, though, are his clean-shaven head, the number 23 on the uniform (onesie?), and his trademark mouth-agape look.

In true early-1990s fashion, this card is darker than your typical superhero fare. A gaggle of golden-armored, sharp-clawed antagonists reaches upwards towards Agent 23, who soars towards the basket in his best Superman impression.

The disjointed nature of lines and objects on the card is a bit disorienting, and the color scheme is, well, something.

As far as design widgets, you’ve got an Upper Deck logo in the upper-righthand corner and a more prominent “FaniMation” emblem in the bottom-left. 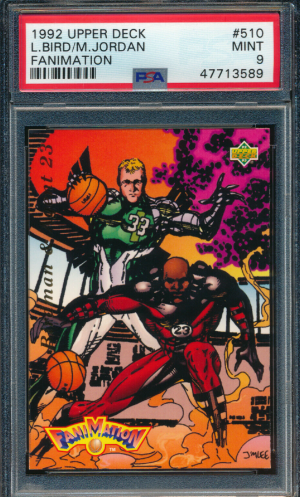 Apparently, MJ wasn’t the only NBA superstar to get the bizarro superhero treatment courtesy of Upper Deck and Image Comics. With the 1992 Upper Deck Fanimation #510, Larry Legend joins the Fantastic Two.

Agent 23 makes his second appearance here. Rather than soaring prone through the air, though, a jacked Super-Jordan dribbles menacingly, legs splayed in a triangle formation looking (ironically) like a Monstar.

Bird stands tall behind Jordan in a decidedly less active pose. Bird’s cartoon alters ego wears a green-and-white skin-tight leotard. He palms a basketball-like orb in his right hand, while his left hand lingers inexplicably in the air as if attempting some type of hypnosis on the viewer.

The rest of the card’s design features are difficult to dissect, as they’re busy beyond belief.

Purple and orange smoke-like clouds commingle with window panes and indecipherable lettering. No card exemplifies the genuinely strange nature of Upper Deck Fanimation’s earliest set quite as this one does. 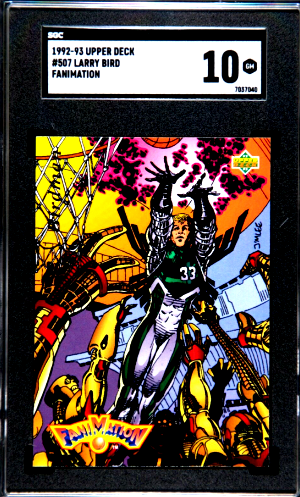 The 1992 Larry Bird Upper Deck Fanimation #507 features Larry on his own, apparently facing the same gauntlet that MJ did in his #506 card.

Bird (aka “Birdman”) wears the same green-and-white getup that he does in his joint card with Jordan. The stakes appear higher this time, though, as robotic nemeses extend their titanium arms in an effort to block Birdman’s shot (and who knows what else?).

The threads of a hoop occupy the upper-left foreground, giving you an idea of what Birdman is shooting for. The contest takes place in some sort of Mad Max-like arena befitting of 1992 Fanimation’s dystopian vibe.

A purple cloud of smoke lingers behind Bird’s just-released shot, and we’re starting to think that this cloud of smoke is one of Birdman’s superpowers.

Like the other Fanimation cards, there is a lot going on here. Let’s be blunt: Those who are prone to seizures may want to avoid this set.

A bonkers product released in the height of the Junk Wax Era, do not anticipate retiring off of your 1992 Upper Deck Fanimation collection. Rather, temper your expectations before you sell or simply hold onto them—you’ll find few cards with more of a fun factor.

Fanimation cards are conversation pieces. For those with an affinity for 90s-style comic book animation, they may be miniature artwork.

In terms of ROI, though, you cannot reasonably expect massive returns from even the top Fanimation cards from the 1992 class. Names like Bird and Jordan are normally bankable assets in the trading card world—but these are not normal cards.

You may find a rare investor willing to pony up a significant sum for a 1992 Fanimation standout. However, based on the general supply of and demand for these cards, it is a set best reserved for true, love-of-the-game hobbyists.