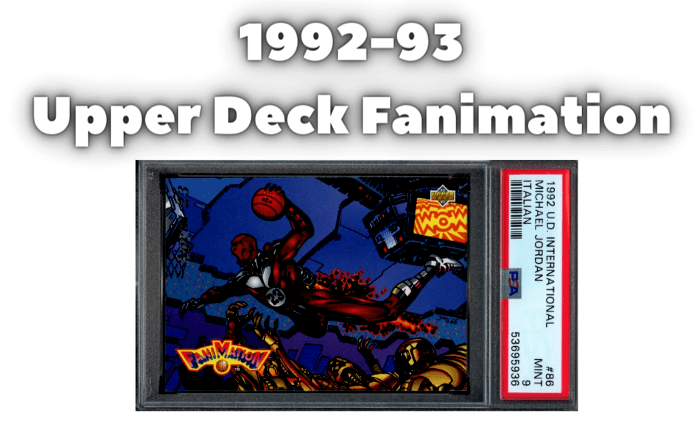 It is at rare moments in sports card collecting history that manufacturers are willing to step out onto the thinnest of branches. Some manufacturers take creative risks into uncharted waters, and they can’t ever be sure how the collecting public will react.

In these moments, the manufacturers either step so far out that they overshadow less daring competitors’ content to remain hidden in the tree’s thicker brush. Or, the limb snaps underneath the card manufacturer, card values tumbling down to the earth with a thud.

In certain cases, the result of a manufacturer’s risk is less binary. Even when a set is largely mocked or rejected, there are often collectors who can appreciate the risk that the manufacturer took.

This is the abbreviated story of Upper Deck’s 1992-3 FaniMation Basketball set.

The comic book-themed release is so out-there, so unlike any set before or after it, that you’ll find plenty of collectors who decry it as an abomination.

You’ll also find plenty of collectors who have eagerly purchased these odd creations, seeing them as undervalued, one-of-a-kind commodities. Consider the argument for both lovers and haters of the 1992-3 Upper Deck FaniMation NBA set.

Upper Deck FaniMation: A Brief History of the Polarizing Set

Perhaps more attention was warranted considering the pioneering nature of the FaniMation set.

The set would not have been possible if not for a serendipitous melding of two massive industries—comic books and sports cards.

Image Comics formed the comic book side of the FaniMation mind-meld. Founded in 1992, Image Comics was comprised of seven acclaimed comic book artists who decided to leave their stations at Marvel Comics and form their own creative outfits.

Today, Image Comics is the third-largest publisher of comic books in the U.S., with many accolades to its name. In 1992, though, it was looking to make a splash.

One way that it would make that splash, Image Comics leadership apparently decided, was to do a tandem dive into the sports card pool, partnering with trading card giant Upper Deck. The result: the 1992-93 NBA FaniMation series.

The most coveted cards in this set featured two of the NBA’s brightest stars: Michael Jordan and Larry Bird. Each star had a solo card to their name, Michael appearing as Agent 23 and Larry rocking a full-body leather suit that would fit perfectly alongside the Fantastic 4.

The last card in the set features Bird and Jordan together, a dynamic duo of jacked, leather-clad NBA super…heroes.

These cards were quintessentially 90s in their aesthetic, but they were a completely unique, foreign entry into the sports card pantheon. Naturally, the perception of these bold cards was divided starkly among collectors.

One word sums up the case for Upper Deck’s FaniMation series: fun.

Cards featuring cartoonish versions of NBA superstars were never going to appeal to card purists. The collector who idolizes the 1986 Jordan Fleer RC #57 may view Upper Deck FaniMation’s rendition of Jordan as blasphemy.

Collectors with an appreciation for the wonky, on the other hand, see Jordan’s Agent 23 alter ego on a FaniMation card and simply ask, “why not?”.

Few would argue that the 1992-93 Upper Deck Fanimation NBA set is the most beautiful you can buy, or anywhere close to the most beautiful. You’d be hard-pressed to argue with someone who says the absolute chaos of this set is downright fun, though.

How fun? That’s for you to determine. Your answer may dictate whether you choose to add an Upper Deck FaniMation card (or five) to your own collection.

SB Nation’s Bill Hanstock summed up the anti-FaniMation contingent’s view when he wrote in 2012 that the 1992-93 NBA Fanimation cards are “Sports Cards for Insane People”.

The primary arguments against the debut Fanimation set are:

Several of these critiques focus on the logical consistency of the scenes unfolding on each card. A valid criticism, to be sure, but likely not the primary critique of sports card purists.

Those well-versed in sports card collecting may have been most offended by the very creation of these sports card-comic book hybrids. Comics are comics and sports cards are sports cards. Why try to make each into something it is not?

Those same critics may even admit that done in a tasteful way, a bit of animation on sports cards can work (see: LeBron James’ Panini Innovation Kaboom!).

However, they’d also contend that the merging of athletics with ill-conceived superhero concepts just didn’t work, either conceptually or aesthetically, with the 1992-3 FaniMation set.

Do you think they had a point? Beauty is, after all, in the eye of the cardholder.

The State of UD Fanimation Today: Undervalued Beyond Belief 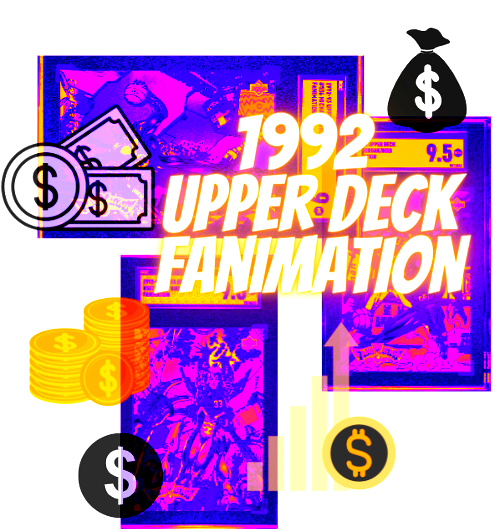 If you do an eBay search for Upper Deck’s earliest NBA Fanimation set, you might be surprised at the sales prices. These cards are accessible, even for investors of modest means.

The FaniMation cards featuring Michael Jordan are, naturally, the most popular. This includes Jordan’s solo card and his combination card featuring Larry Bird.

The 1992 Michael Jordan Upper Deck FaniMation #506 shows cartoon Jordan sailing through the air. He cocks a burnt orange ball behind his head in his left hand, a dunk presumably imminent.

The 1992 Jordan/Bird Upper Deck FaniMation #510 is just as popular as #506. You get two superstars for the price of one, with each star flexing their airbrushed physiques in equally cartoonish poses.

The Karl Malone FaniMation #508 and Larry Bird Fanimation #507 seem to be next in the pecking order, though each generally sells for significantly less than the cards featuring Jordan.

Even if you are not a fan of the concept or the execution of Upper Deck‘s FaniMation cards, you may decide to take a flier on them. Though they’re not exactly cheap, they seem highly affordable considering the HoF players that they feature and the general obscurity of the set.