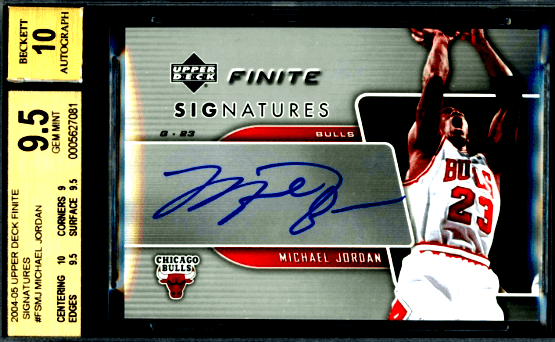 Michael Jordan is arguably the greatest ever, and his popularity has continued to grow despite his retirement in 2003.

The Last Dance documentary series released in 2020 is yet another example of his neverending star power, drawing over 13m viewers as it set rating records for ESPN.

We’ve put together a list with five of the most underrated Michael Jordan basketball cards and inserts.

While the options we’ve listed below are never likely to match the six-figure value of Jordan’s 1986-87 Fleer rookie card, they’re still underrated compared to the vast majority of his high-end options.

‘Underrated’ can mean many things, and it’s not a word typically used to describe Jordan or his feats.

By underrated, we don’t mean the cheapest or even cards that aren’t appreciated as much as they should be aesthetical.

Instead, we’re looking at the rarest, most interesting cards that are still relatively affordable, with a decent chance of making a profit as a mid to long-term investment.

The 2004/05 Upper Deck Signatures is a premium landscape card, with a light grey border and background.

Along with featuring a Bulls logo, the addition of a prominent on-card autograph is the main reason why it makes the list.

The player image is located on the right, showing Jordan ready to shoot.

The signature is the real focal point, laid over the image of MJ in the middle.

It’s a lot cleaner than the SPx version that also has a player patch, and it’s typically more affordable.

A 9.5 BGS grade will sell in the low five-figure range, but it’s still underpriced compared to other premium signed pieces of Jordan memorabilia from the mid-2000s. 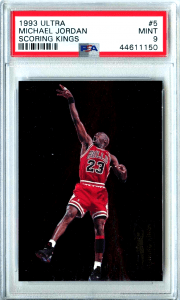 This 1993 Fleer card features an action shot of Jordan at full stretch, with purple lightning filling the background across a dark sky.

It’s another iconic option from the era, and has slowly gained value over the last decade or so.

The deep-etched photo makes it stand out further, with MJ springing from the card in an explosive display.

The main reason why this card gets slept on is that it’s so difficult to find in pristine condition.

It wasn’t rare when it first released, but It’s now over 15 years old, and the foil is easily chipped or scratched.

This makes higher grades more collectible than the norm, and they’re widely available in the three-figure range. 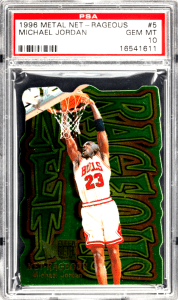 An insert that couldn’t be mistaken for any other era than the ’90s, the 1997 Fleer still holds up well for modern collectors interested in Jordan merch.

The ‘Net-Rageous’ name is displayed as the background with a graffiti effect, while the Michael Jordan version is the most valuable, and reasonably rare at 1:288.

With lots of curved edges and a foil finish it’s no wonder that it’s hard to find in pristine condition, and it’s a step above the typical Jordan memorabilia from the era.

The uniqueness isn’t reflected in the average price, as a decent copy can be found for roughly $1000. 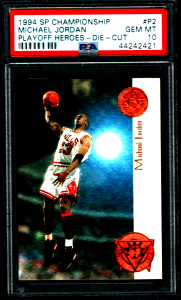 In a recurring theme, the 1994-95 SP Championship Playoff Heroes image shows Jordan soaring through the air mid-jump, with the court in the background blurred to ensure all eyes are on the main man.

It’s a great effect, as it’s almost like he’s jumping out of the card itself.

Another iconic option, a pristine version can sell for just over $1000, while decent grades can be snagged for a fraction of that price.

It’s a step above the usual entry-level MJ cards, even if it doesn’t have a signature or a player patch attached. 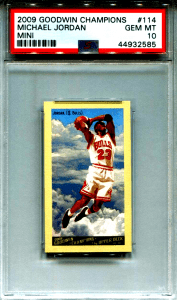 We’ll end with another option that’s always popular at auction, while still being affordable enough to be a decent investment.

A throwback to vintage cards of yesteryear, the hand-drawn image shows Jordan flying above the clouds as he prepares to dunk, like a modern-day Superman.

It’s topped off by a premium finish on the reverse, and it’s stylized to look like a card from the ’50s.

Despite being small in stature, this mini still commands a decent price if you’re looking at PSA 8.5’s and above, and it’s likely to be a shrewd investment if values continue to rise at current trends.

Why Underrated MJ Cards Are Such a Good Investment

As The Last Dance proved, Jordan is always going to be a big draw for fans of all ages, and his collectibles are a steady investment in a time when Wall Street is shakier than usual.

Reports suggest that the combination of quarantine and a renewed interest in the player has led to strong prices in recent months.

Superior Sports Investments owner Bill Sliheet noted: “There’s a lot of new money coming into the hobby just based on that documentary.

It’s mind-blowing. Michael Jordan cards have gone up two-fold since the month before The Last Dance was announced.”

Not into basketball? Check out one of the best baseball players of all-time… Mickey Mantle Rookie Cards!

It’s the ideal time to list up any MJ cards in your collection or to grab a couple of the lesser-known options we’ve mentioned.

Even the underrated cards we’ve listed are seen as iconic, and reflective of his reputation as one of the greatest ever.

Despite a number of worthless options from the back end of the junk wax era, Jordan still has so many cards that are worth checking out, even if it’s just to get a feel of 90’s/00’s nostalgia.

The best of his mid-range cards have increased in value over the past decade, especially as Jordan fans have grown into adults with enough expendable income to pick up a couple of the cards they coveted in the past.

CTA – There’s no better modern player than Michael Jordan when it comes to collectible basketball cards, but there’s still a number of great investment options that are underrated by the collecting community.

5 ROOKIE CARDS THAT COULD DOUBLE YOUR MONEY IN 2020