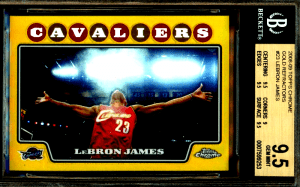 LeBron James’ basketball cards hit the headlines recently after a gem mint copy of his 2003-04 Topps Chrome, which features James mid-jump while taking a shot during his rookie season with the Cavs, sold for $57,100 at auction.

But what’s the big deal? After all, cards sell for crazy figures all the time, and LeBron is one of the biggest stars in the world.

The real news is; it sold for just $7,150 four years ago, making it one of the canniest investments in the hobby.

Just under $50,000 worth of profit is incredible, while it’s a seven-fold increase overall.

Given the news, we’ve taken the time to pick out five underrated LeBron James cards that could be a great investment, as long as you’re willing to hold onto them for longer than a couple of months. 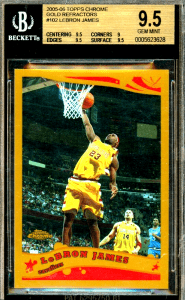 The first card to make the list is the 2005-06 Topps Chrome. There’s a large image of James in the process of dunking, with his name located at the bottom.

As the picture takes up the majority of the card, refractors mainly focus on the border color.

The Gold Refractor is probably the pick of the bunch, as the red and gold design blends in well with his Cavs jersey.

Released just a few years after his original batch of rookie cards, good copies of the 2005-06 Topps Chrome are currently priced in the low five-figure range.

It’s a fraction of the price of the equivalent RC, so it’s a solid investment piece that is often slept on.

The Next LeBron?: Luka Doncic Rookie Cards are a top-rated investment!

The second, (and final) Topps Chrome on our list, the 2008 version is different in almost every way. It has a stunning landscape design, with a large team name at the top.

The image features James under the lights, soaking up the atmosphere with his head tilted back and his arms held aloft.

It’s a great example of symbolism, showing off the player’s God-given talents.

In terms of similarities, both are colorful options, and they’re already highly contested by collectors at auction.

As the RC we mentioned in the intro highlights, it’s best to look for the highest grade possible.

As well as non-refractor versions that we’d avoid, you’ll be able to find the following refractor parallels; 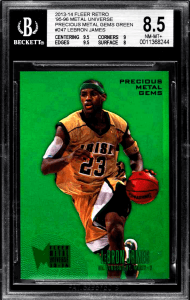 Based on the famous 1995-96 Metal Universe release, the retro flavor makes this PMG card highly collectible, even if it can be difficult to find a good copy because of the foil background.

You can tell these are premium cards straight away, as everything from the look to the feel oozes class.

The design features a cut-out of James dribbling with the ball in his hand, with everything else giving way to a distinct deep foil design.

Parallels change the background color, with each offering a distinctive look.

Of the three, the green is arguably the easiest on the eye, blending well with the James’ headband and Irish jersey. 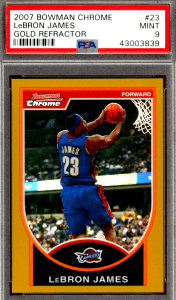 The 2007 Bowman Chrome is another interesting card, with a solid finish and a crisp action shot.

As you might expect, the image features James soaring up towards the rim as he prepares to dunk in signature style.

With the others we’ve listed it’s okay to look out for parallels, but for this card, we’d exclusively search for the Gold Refractor version.

It arguably has the most potential to shoot up in price, as it’s in a similar spot to the 2003-04 Topps Chrome four years ago.

In comparison, the Black version isn’t valued highly by collectors, but it could be a decent low-budget option. 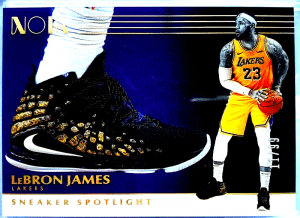 Do you ever feel like a card is trying to sell you something on the sly?

As a ‘Sneaker Spotlight’ card this landscape option is more concerned with the Nike’s on James’ feet, as opposed to the player himself.

The shoe is given pride of place, taking up about 70% of the card’s real estate. James is relegated to the sidelines and it kind of looks like he’s playing the sneaker in a 1v1.

Given the niche design, it’s far cheaper than the others we’ve listed above, even when looking at the best versions on the market.

Of course, it’s also the most recent card on our list by a wide margin, which should be factored into account. 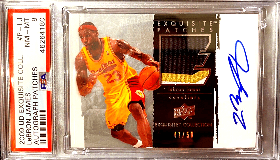 Email advice@goldcardauctions.com if you would like help buying a LeBron James auto.

Nothing is certain, but you only have to look to the example given in the intro to see why underrated LeBron cards could be a great investment.

It’s a ridiculous ROI and one that you probably wouldn’t see even with the benefit of insider knowledge.

On the court, he’s ever-present, hoping to add to an extensive list of achievements that include being a three-time NBA Finals champion and MVP, notching up 16 All-Star appearances, and many, many more.

At 35, he’s clearly on the final stretch of his playing career, although he hopes to go on until the age of 40.

He’s an active social campaigner, recently helping to form an organization called ‘More Than a Vote’, with one of the stated aims being to inspire African-Americans to register and to cast a ballot in November.

He’s opened a school in his native Ohio, while he’s also paid the college tuition fees for low income University of Akron students.

The point is, he doesn’t seem to be anywhere near done with public life, and a foray into politics or something similar could be on the cards in the future. He definitely has the popularity and financial stability to make a mark.

From an investment perspective, it’s clear that Gold versions are always popular, and there are still a few LeBron cards that are undervalued compared to his RCs.

They might not go up by seven times in four years, but there’s still good potential for profit, especially after his inevitable retirement.

CTA – If you’re interested in basketball legends, we have rookie card reports for everyone from Michael Jordan to Kobe Bryant.

For more investment advice, check out our list of five rookie cards that could double your money in 2020, or see who we picked out of LeBron and MJ.

What LeBron James basketball cards are worth money?

LeBron James cards are not a good investment, they are a GREAT investment and are considered one of the best cards in the hobby to own long-term.

LeBron James rookie year was in 2003. 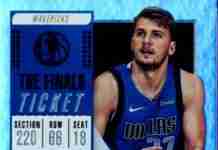