As an emerging sport, the UFC has quickly amassed millions of fans worldwide since the first event in 1993.

This has only snowballed in recent years, and they’re one of the few companies to have taken on COVID-19 head-on, continuing to broadcast fights with no interruption.

“The most popular MMA promotion also has the best fighters, and some of the most valuable cards to enter the collectible hobby in recent years.”

Here’s everything you need to know about UFC trading cards, including where to buy, and some of the best options on the market right now.

The biggest and best names from the past two decades make it onto the list, and each one has been a champion in the past. Some have held a belt at two weights, and others have held two at the same time.

As for the fight fighter on our list, it’s no surprise. 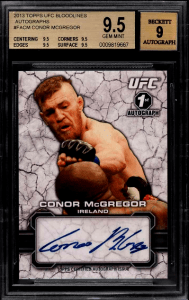 Who better to start with than ‘The Notorious’ Conor McGregor? A fighter who helped to popularise the sport like no other, the former P4P number one is still a contender in 2021. His feuds with Khabib Nurmagomedov and Nate Diaz were legendary, and he won a title with a single punch.

The 2013 Topps UFC Bloodlines set has a bonafide McGregor RC, noted as his first-ever UFC autograph card. There’s an image of the fighter pawing a jab at the top of the card, and there’s an autograph located beneath. There’s no border, so it’s difficult to find copies that have achieved a gem mint grade.

The Red Ink nickname parallel is one of his best looking cards, and the base edition will sell for at least five figures when looking at perfect versions. 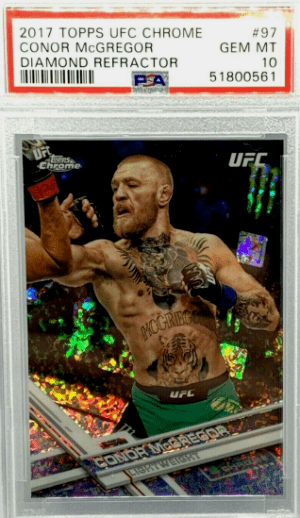 The return of the Mac, the 2017 Topps UFC Chrome set is packed full of cards featuring their golden goose. It features McGregor during his stint at lightweight, throwing a trademark counter right. It’s a great card, but it wouldn’t be the UFC without a Monster logo somewhere.

It can’t compare to the McGregor RC seen above, but it’s still one of the most valuable UFC cards in existence. There’s also a range of rare parallels which are listed below: 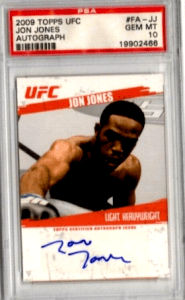 In terms of pure talent, Jon Jones was streets ahead for years. He had the longest Light Heavyweight champion reign in UFC history and beat all comers before vacating the belt after deciding to fight at heavyweight in 2021.

Jones’ 2009 Topps UFC card is an RC of sorts, with an action shot of the fighter in the octagon. It lists his record as 8-0-0 on the back and has a red and white motif with a classic UFC logo at the top.

An autograph is found at the bottom, although it is a sticker that has been placed on top, rather than a hand-signed card.

Jones is a unique case, considering the bad press he has received following a number of notable controversies over the years. Few can doubt his talents or his accomplishments, but he doesn’t have as many fans as you might expect.

Georges St Pierre carried the UFC on his back for years, using a combination of skills and intelligence to keep himself one step ahead of the competition. Dana White might hate him, but it’s hard to find a nicer guy in MMA.

He retired as the reigning Welterweight Champion in 2013, having held the record for the most wins in title bouts and the second longest combined title streak in UFC history (2,204 days) while defending his title nine consecutive times. He then went on to beat Micheal Bisping to become the Middleweight champion after four years out.

His 2009 autograph is from the same set as the Jones card seen above, and it’s a real piece of history for any serious fan. It features a black and white image with GSP colorized, while there’s a stickered auto found at the bottom. There’s a Red Ink version limited to just 25 copies, and should be sought out if possible. 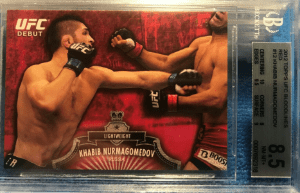 Khabib Nurmagomedov, the retired champion with a record of 29-0. The Eagle who soared, beat McGregor easily, dominated the division and kickstarted endless memes. He might come back to fight GSP or may give it all up as his mother wished. One of the most dominant fighters of all time, he’s a true anomaly.

His fanbase is massive, so this rookie card is another that does well at auction. It’s a landscape release, featuring Khabib’s underrated stand-up as he throws a jab. The 2012 release is seen as an RC as it has a ‘UFC Debut’ logo found in the top left corner. There are also five rare parallels to be on the lookout for.

UFC Trading Cards: Where to Buy

In terms of where to buy, we’d look to eBay as a primary source of the best UFC cards, as well as other MMA related merchandise. There are also dedicated sellers and a number of niche websites, but they often struggle to compete with the sheer size of the online auction platform.

We’d stick to graded options, whether it be PSA, BGS, or SGC. This way, you can be sure of the legitimacy of any item you’re buying, and you can use previous sales as a rough guide as to what the price should be.

As you might have guessed, McGregor is a commercial juggernaut when it comes to UFC collectibles. Expect to pay upwards of five figures if you’re looking at graded copies of his earliest cards that have also achieved gem mint status.

Personally, I can see prices going much higher when he inevitably retires, even if McGregor never gets near a belt again.

Then again, much depends on the legacy of each of the fighters on this list. Will Khabib stay retired, or will he come back to get the 30-0? Will GSP finally call it a day, and will McGregor give up with his antics? As for Jones, let’s not go there.

Whatever you think of them personally, they’re likely to be held up as the very best from their era, and each will be missed when they’re gone. There’s always a new set of stars to follow, and that will help the sport to grow in the future, but fighters like GSP and Jon Jones were true pioneers, so there will always be interest in their cards.

As with the UFC itself, the market for trading cards has exploded in recent years. Put the two together, and it’s clear that there have never been more eyes on the sport, and cards are currently selling for record prices.

You’ll have to stick with the very best of the best, but there’s still a great chance for profit when it comes to vintage UFC cards.

Otherwise, we’d advise sticking with young contenders that have potential or even to take a look at some notable female fighters that are currently underpriced, such as Ronda Rousey’s 2012 UFC Finest card.