Must Invest: Luka Doncic Rookie Cards Are A Must

Haliburton is currently ranked in the top 3 by Vegas in rookie of the year odds BUT good luck my friend, when you have to compete with one LaMelo Ball.

Tyrese stands 6-5 and tips the scales at 185lb, he played college ball at Iowa State where he was averaging 15.2 points per game before the 2019 season was cut short due to COVID19.

Let’s take a look at the top-rated Tyrese Haliburton RCs money can buy. Please note we will update this write-up as more cards are released throughout the year (i.e. Opulence, National Treasures). 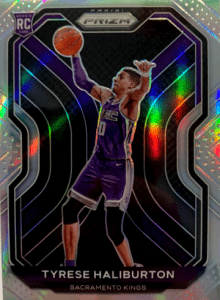 Here is the most popular Tyrese Haliburton rookie card and one of the best in terms of ROI as well.

Great buy for both short and long-term buyers. 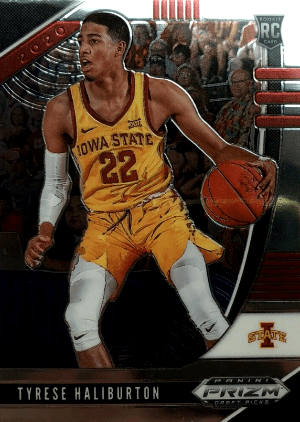 The second card on this list has Haliburton wearing the Iowa State gold jerseys and if you believe in Haliburton as a prospect then this card is one of the better ones as an investment option.

The Panini Prizm set is one of the more popular among basketball collectors and thus that adds to the value of this card.

For those that are looking to collect the rainbow, there are many different parallels offered for this card with a variety of colors. 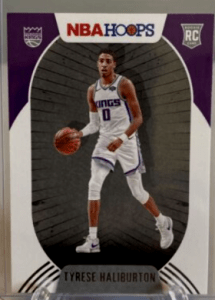 NBA Hoops is the last Tyrese Haliburton rookie card on our list and also the cheapest out of the bunch. The good news is it’s cheap at even high grades.

The bad news is the NBA Hoops card is not a great card by any means and we would call it poor (unlike the new Mosaic Football Cards that we like as much as the Football Prizm cards).

The most expensive Tyrese Haliburton rookie card sold to date is the 2020-21 PANINI PRIZM TYRESE HALIBURTON #262 BLUE SHIMMER 29/35 MINT RC ROOKIE CARD, and it is a truly stunning card.

If you are looking to buy a Haliburton RC but are unsure if you should buy now or wait a few months please email us at advice@goldcardauctions.com and we will help out.

Tyrese is off to a great start and appears to be loving life in Sacramento (both teammates and coaches have had nothing both great things to say about this kid).

Some pundits believe he will win the NBA rookie of the year award although he was drafted in the same year as LaMelo Ball so good luck with all that.

Having said that, the kid has a stellar offensive and has garnered high praise from high-ranking executives around the league.

We personally do not own any Tyrese Haliburton rookie cards but have no problem if you buy a few. He seems like a highly talented, easily coached, and well-adjusted person who has all the talents it takes to be a star in the league.

What is the most expensive Tyrese Haliburton Rookie Card?

Which Tyrese Haliburton rookie card is the most popular?

The most popular Tyrese Haliburton rookie card is the 2020 Panini Prizm DP RC as numerous auctions can be found on eBay at any time.

Will Tyrese Haliburton rookie cards go up in value?

Tyrese Haliburton's rookie cards should go up in value over the next few years as he proves he belongs in the league and possibly develops into an NBA All-Star.