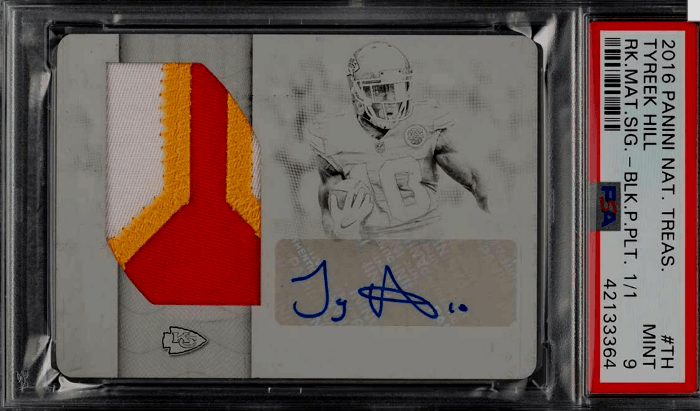 Tyreek Hill (03/01/94) is a WR who has played for the Kansas City Chiefs since being drafted in the fifth round in 2016. He was far from the finished article, but there was no denying his raw talent at the time.

The gamble paid off for the Chiefs, as Hill was named to the NFL 2010s All-Decade Team as a punt returner, he won Super Bowl LIV (stats), and he has made four consecutive Pro Bowl appearances from 2016 onwards.

You’d be forgiven for expecting his RCs to be some of the best investment options on the market. Despite his obvious abilities, he’s made the news for multiple off-field indiscretions, so has that had an impact on the bottom line?

We’ve come up with a list containing three top Tyreek Hill rookie cards, as well as info and rookie card investment advice if you’re thinking about picking up a couple of copies in the hopes of making a tidy profit in the future.

Having been overlooked initially by manufacturers due to being drafted 165th overall, Hill rapidly saw RCs added to later sets in 2016. This means that there’s a limited number of NFL-licensed autographed football cards available, which is a far cry compared to typical hyped rookies who are featured heavily in modern sets.

Nonetheless, you’ll find Hill cards in the majority of 2016 releases, while there are lots of rare inserts and parallels if you’re interested in chasing the rainbow. 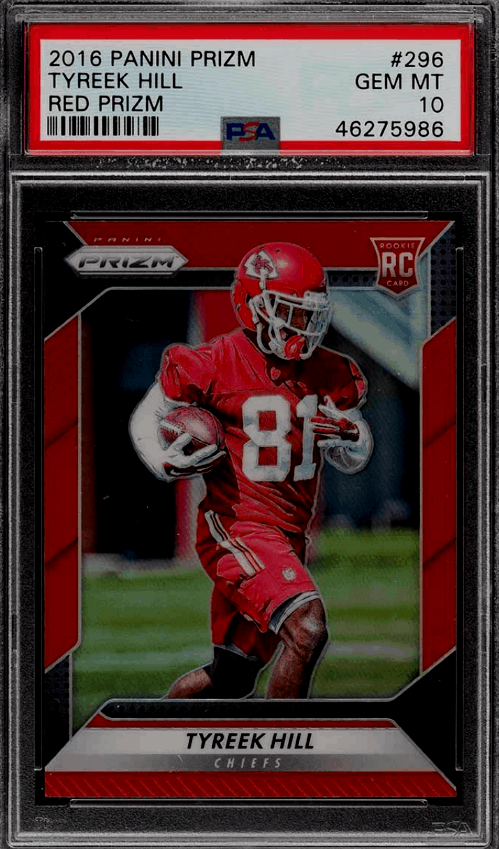 Normally seen as a great entry-level option, the 2016 Panini Prizm is actually one of the more expensive Hill RCs on the market, depending on which version you look at. It features a simple image of Hill in motion, with a ball tucked under one arm. As he’s in full gear, his face is obscured, but his jersey number is clearly visible.

It comes with a unique Prizm border, and an RC logo is found in the top left corner. There’s a wide range of colored parallels, including a number of versions with low print runs such as the Gold card which only has 10 copies overall.

As an investment piece, there’s something to suit almost every budget, and it’s always a popular choice for collectors.

The next option hails from the Rookie Patch Autos subset, as part of the ever-popular National Treasures release. Another 2016 rookie card, this one has a landscape design, and a premium feel.

The base card has a white and red design, with an image of the player found on the right-hand side. Hill’s on-card auto is found beneath, while there’s a second segment on the left to allow for a large player patch.

NT cards benefit from brand recognition and strong designs, while the auto helps to add value. Parallels will change the color of the foil trim, and they’re pretty affordable considering what’s on offer. 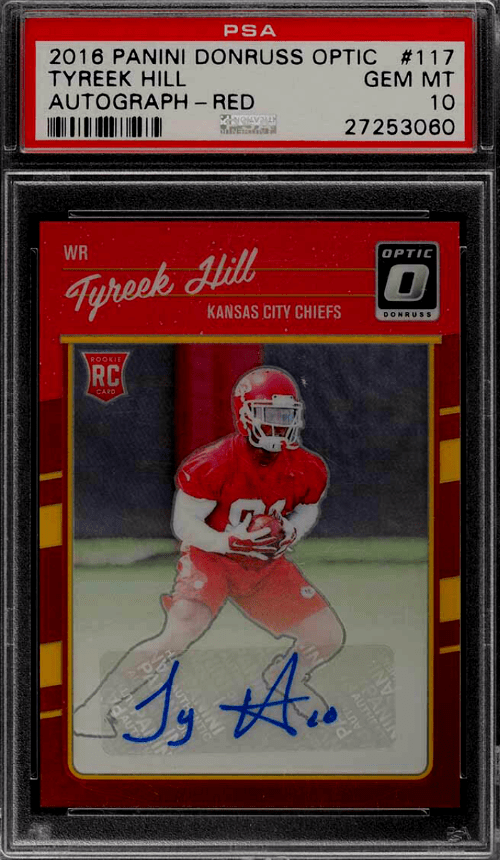 Lastly, there’s Hill’s 2016 Donruss Optic. It has a thick, bordered design, which corresponds to the color of the parallel if applicable. The 2016 Donruss set actually has two Hill RCs, with an autographed card and an unsigned edition. We’re looking at the former here, although the latter is a decent budget option.

It features a thick border at the top, with a boxed action shot of the player found beneath. The image of Hill is lined, while his visor makes it difficult to identify the player without looking at the name at the top of the card.

You’ll find a stickered auto at the bottom, which is slightly disappointing compared to the premium option seen above. There are a number of rare parallels if you’re hoping for more valuable investment pieces. 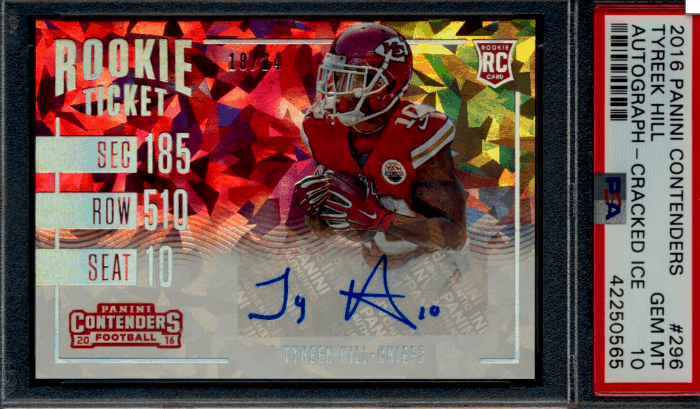 In the market to buy a Tyreek Hill football card? Need help? Email us for advice at advice@goldcardauctions.com or hit us up on the GCA Facebook Page. 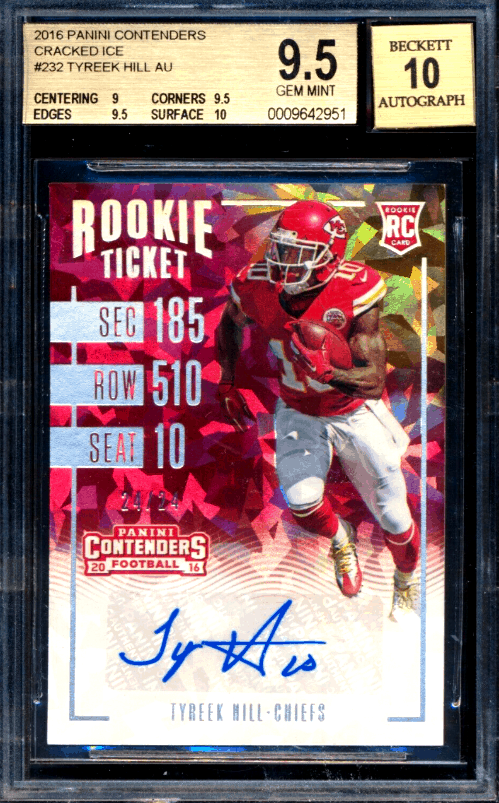 From a sporting perspective, Hill can’t really be faulted. He’s reached levels that were previously unexpected and put many doubters to rest following an explosive start to life in the NFL.

He’s a highlight reel player and a supreme athlete. His blistering pace is only one aspect of his game, and he continues to improve as he nears his prime. However, that’s only one side of the story.

After being arrested in 2014 for alleged domestic violence during his time at college, he wasn’t invited to the NFL Combine, but Hill ran a 4.25-second 40-yard dash at his pro day, so the Chiefs were willing to take a risk.

The allegations surrounding child abuse in 2019 seemed like they could derail a promising career, but they were eventually dismissed by the league as hearsay, with no definitive evidence available. After a meeting with the player in July 2019, the NFL released a statement;

“Based on the evidence presently available, the NFL cannot conclude that Mr. Hill violated the Personal Conduct Policy. Accordingly, he may attend Kansas City’s training camp and participate in all club activities. He has been and will continue to be subject to conditions set forth by the District Court, Commissioner Goodell, and the Chiefs, which include clinical evaluation and therapeutic intervention. “If further information becomes available through law enforcement, the pending court proceeding, or other sources, we will promptly consider it and take all appropriate steps at that time.”

The decision not to discipline the player was a shocking one, but it does give him a better chance of making the Hall of Fame in the future. That should also have a positive impact on the prices of his rookie cards.

Hill has a range of affordable investment options, including autos and patches, as well as rare parallels. Any of the cards above have good potential for profit in the future, but he’ll need to be on his best behavior from now on.