The Seattle Seahawks drafted Tyler Lockett with the 69th pick in the 2015 NFL Draft out of Kansas State University and boy ol’ boy are they glad they did as he has developed into a top wideout in the NFL. 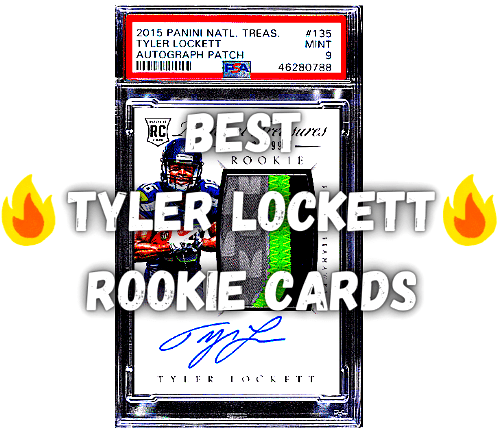 During Lockett’s rookie season, the speedy slot receiver caught 51 passes for 664 yards and 6 touchdowns. He was named First-Team All-Pro as a returner.

Lockett’s speed and strong hands have proven a consistent asset throughout his time in the league. 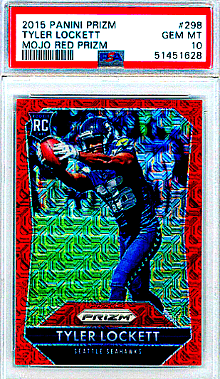 A look at the 2015 Tyler Lockett Panini Prizm RC #298 is a reminder of how consistent Prizm’s design has been in recent years.

The standard silver backdrop with indented side borders defines this card. A series of dots and lines keep the border interesting.

The player image is a worthy one, with the diminutive yet muscular Lockett using every inch of his arms to secure a catch. The football appears oversized in his white receiver gloves.

The green backdrop of a football field blends in with the card’s slight silver-green hue. The card’s bottom portion features a nameplate including a white, hexagonal Panini Prizm logo.

As with all Prizms, you can make out a faint silver border around Lockett’s image.

With Panini Prizm, you generally know what you’re getting—a solid player image, refraction, and few other frills. And still, it works. 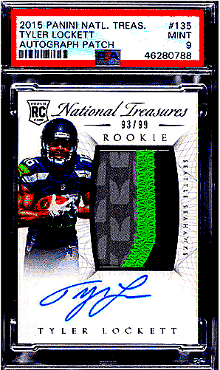 The card has a vertical orientation, and the player patch is the eye-catcher. It is a vertical rectangle with slightly rounded sides. The patch itself features a grey lefthand side (with barely visible designs), a Seahawk-green middle stripe, and a dark blue righthand side.

To the right of the player patch in fine silver lettering is a vertical “Seattle Seahawks” banner. Atop the patch is a “Rookie” banner, and atop that banner is the ornate National Treasures logo and a (/99) print run indicator.

To the left of the player, patch stands Lockett, grinning ever so cheekily beneath a navy blue helmet and facemask.

The Seahawks phenom cradles the pigskin in fresh Adidas receiver gloves, muscular arms resplendent. The image is as crisp as his form-fitting jersey.

The card’s bottom portion is reserved for Lockett’s autograph and an understated nameplate. The autograph is one-of-a-kind, a “T”, “y”, and “L” being the most obvious features of the blue signature. 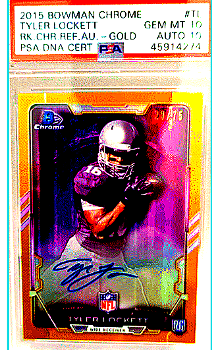 Here we’ve got the rare Tyler Lockett rookie card that appears to feature him in his Kansas State Wildcats uniform (albeit a logo-less version).

The Rookie Chrome Refractor set featured some of the most prominent college players from Lockett’s rookie class. The catch with Bowman’s early release to market is that the rookies have yet to have a chance to receive their team uniforms.

Some collectors will find intrigue in this unique logo-less Lockett rookie card. The shifty receiver holds the ball awkwardly at head level, eyes peering furtively as if he holds a precious possession (he kinda does).

The purple-silver KSU color scheme of Lockett’s uniform sets this card apart from most other Lockett RCs.

The purple backdrop fades into a silver color towards the bottom of the card. Lockett’s blue signature sits where his legs would be.

Beneath the Lockett signature is an NFL emblem, nameplate, and “RC” emblem in the bottom-right corner.

Here are the most valuable Tyler Lockett cards. If you have a Tyler Lockett football card and would like an estimated value please email value@goldcardauctions.com (include 2 photos of the card at a minimum and entitle the email “value request”.

Anyone who has played fantasy football in the past half-decade is intimately familiar with Tyler Lockett. However, few Super Bowl-only football fans are aware of the Seattle slot man.

Lockett will never be equipped for superstardom. Unless diminutive peers like Antonio Brown and Tyreek Hill, Lockett has never had the “me”-factor that star NFL receivers require.

And yet, Lockett has been one of the most productive slot receivers of his generation. There is absolutely value in a player who simply produces, and Lockett does just that.