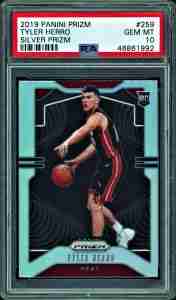 Every year the NBA is lucky to have new players like Tyler Herro enter the league. However, not all of them have an immediate impact like Herro did with the Miami Heat.

As the 2022 playoffs take place, Herro is wrapping up just his third NBA season, but his impact has been tremendous.

However, the NBA came back for the bubble playoffs, and the Heat went on a cinderella run to the NBA finals. They eventually fell to the Los Angeles Lakers, but it was an incredible run.

Tyler Herro’s sophomore season saw him take a small step forward, but his third year was when he really exploded onto the scene. Averaging 20.7 points, 5.0 rebounds, and 4.0 assists in 66 games, Herro was named the 2022 NBA Sixth Man of the Year.

Herro is on an impressive trajectory, and as a result, we think it is important to look at his rookie cards.

We know that it can be difficult to figure out which rookie cards you should invest in. Here we’re going to look at some of Tyler Herro’s best rookie cards.

While there are several options available, we are just going to look at our three favorites today.

The Panini Prizm collection always has the most sought-after cards from every rookie class. That did not change in 2019 as Tyler Herro’s best rookie card came from that collection.

It is a simple card that features Herro dribbling the ball up the court in his black Heat uniform. You can see the RC logo in the top right and the Prizm logo towards the bottom of Tyler Herro’s name. The background is a mixture of black, red, and blue.

On the back of the card, you can read a short blurb about Herro’s mindset. It mentions that Herro prefers to feed off the energy of hostile crowds rather than the cheers of his fans.

Additionally, you can see his NCAA totals from his only year at the University of Kentucky.

An added benefit of purchasing this card is that there are several parallel Prizms that you can choose from. 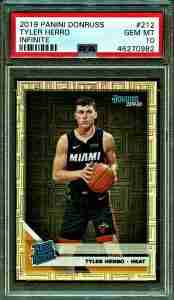 When you are looking for mainstream options, there are few better options than the Donruss Rated Rookie Card collection. These cards are easily accessible because of their high print run.

Since there are many of these cards in circulation, they are better for budget-oriented buyers. However, that does not mean that these cards don’t have value. In fact, cards from this collection consistently rise in value every year.

The card itself features Herro standing with the ball in his hands. He is wearing his black Miami uniform, and the picture has a white border.

You can see the Donruss logo in the top right, and the Rated Rookie logo in the bottom left of the card. 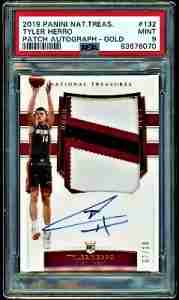 There is an on-card autograph, jersey patch, and there are only 99 copies in circulation. As a result, it is the rarest Tyler Herro rookie card on the market.

Another appealing aspect of this card is that its design is fantastic. It features Herro taking a jump shot on the left of the card, with the jersey patch on his right. His autograph is clearly visible towards the bottom of the card.

The only downside to this card is that it’s very expensive because of its rarity and elite features. It can cost well into the five figures at auctions.

Tyler Herro is only a third-year pro in 2022, and he is coming off a Sixth Man of the Year performance. However, despite being early in his career, his cards are quite valuable already.

There is a lot of hype around Herro, which has caused the price of his cards to increase.

If you have a Tyler Herro rookie card and you want to know its value, contact us. Include two pictures of the card in your inquiry.

It is best to invest in players’ rookie cards when they are young. Tyler Herro is just 22 years old, and as a result, there is a chance that he could improve drastically. Improvement of any sort should cause the value of his cards to rise.

However, there is reason to be cautious with these cards. Many of them are already very expensive, and Herro is coming off a tremendous year.

He could have an all-star season next year, but it also wouldn’t be the first time a Sixth Man of the Year winner took a step back.

There is certainly value to be had here, but there is also reason to proceed with caution.

When Was Tyler Herro a Rookie?

Was Herro the Rookie of the Year?

No, but he was named to the NBA All-Rookie Second Team.

How Long Was Herro in College?

Herro spent one year at the University of Kentucky before entering the NBA Draft.