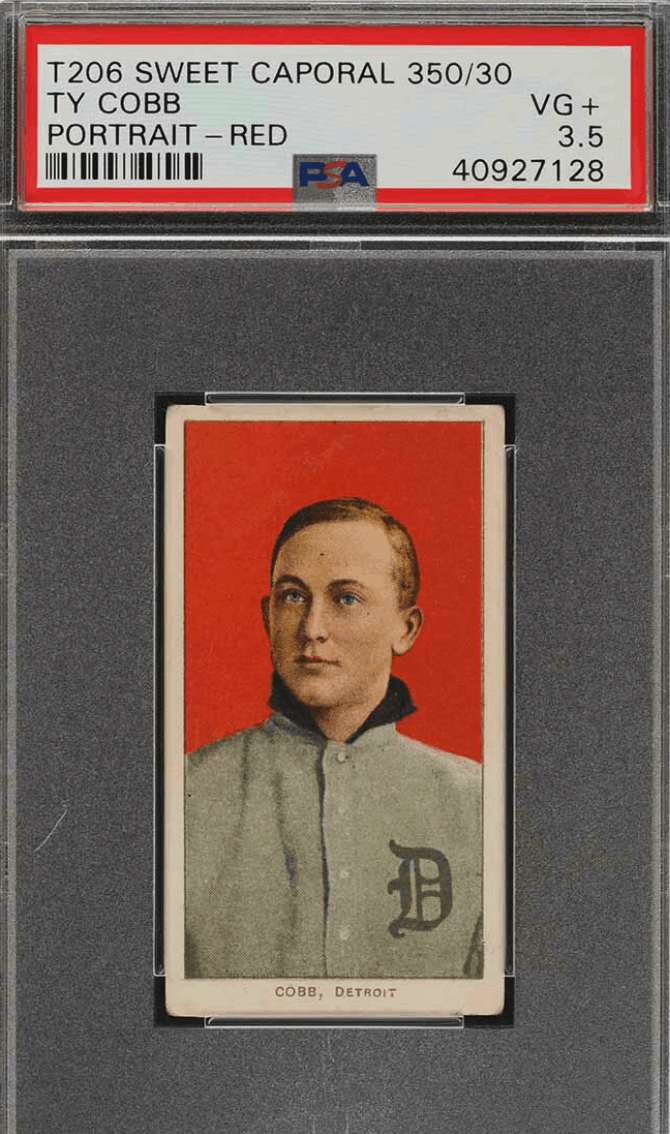 One of the most popular baseball players in history, Ty Cobb (1886-1961) was an outfielder who spent 22 seasons with the Detroit Tigers, as well as six as the team’s player-manager.

He went on to finish his career with the Philadelphia Athletics.

Cobb is arguably the most recognizable player of all time, and his rookie cards are highly sought after.

If you’re looking at pre-war memorabilia, it’s hard to find better than a hand-drawn piece of history.

They’ve illustrated appealingly, although they can cost more than a new Tesla at the high end.

Here are five of the best cards to look out for at auction.

We’ll begin with one of the more affordable options, which comes with Cobb and Sam Crawford on the front.

This unique card was originally distributed with Mecca Cigarettes. The card is meant to be folded, with the players sharing the same set of legs depending on how it’s laid out.

However, this means that it’s difficult to find one in decent condition due to natural wear and tear.

You can also find detailed stats on the card, as this set was one of the first to include player information.

They don’t go up as often as the rest on our list, but that means there’s a chance you could grab one for a good price.

The “Bat Off Shoulder” is the only T206 version that has a mint card, although you’re unlikely to find anything above a 3 or 4 grade at your average auction.

It shows Cobb staring off into the distance, with an old-school bat in hand.

The background is also interesting, showing off sunset and the field in contrasting colors.

You’ll need to spend at least $2,000 for an authentic version, and they generally get anywhere from 20-35 bids.

Then again, the same is true for all four of the cards in the T206 series.

While it sounds a lot like the one we discussed above, there’s a massive difference in price for a PSA 7 or 8.

The ‘bat on shoulder’ version can go for $40,000, and it shows Cobb standing ready for a pitch.

The background is similar to the “bat off shoulder” version, with warm colors that make it stand out compared to modern options.

It’s a simple card, but it’ll cost roughly $1,500 if you want to add it to your collection.

Expect to pay upwards of $1000 for an authentic version of the red portrait, while that figure will probably be tripled if it’s in half-decent condition.

The red portrait card features Cobb in his Tigers jersey, staring off into the distance.

As well as the condition, the price depends on the back of the card, with lots of different variants.

The same is true for the front, which isn’t always a deep red.

It can sometimes appear to be almost orange, and it’s hard to tell if you’re looking at photos online.

The green variant of his portrait card is slightly rarer, although it’s similar to the red one in most respects. 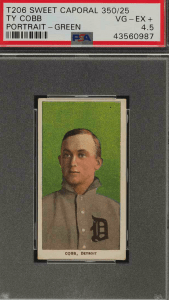 Most suffer from centering issues, and even a half-destroyed version will set you back by roughly $750. T

he original color is a deep green which should still show through, although many have faded in the years that have gone by.

They don’t make baseball cards like they used to, although we didn’t really take care of them as we should have at the time.

Ty Cobb’s rookie cards are genuine antiques, and they’re worth every cent at auction if you can get one in decent condition.

If you can get an authentic, graded version, picking up one of Cobb’s rookie cards is a no-brainer as long as the price is right.