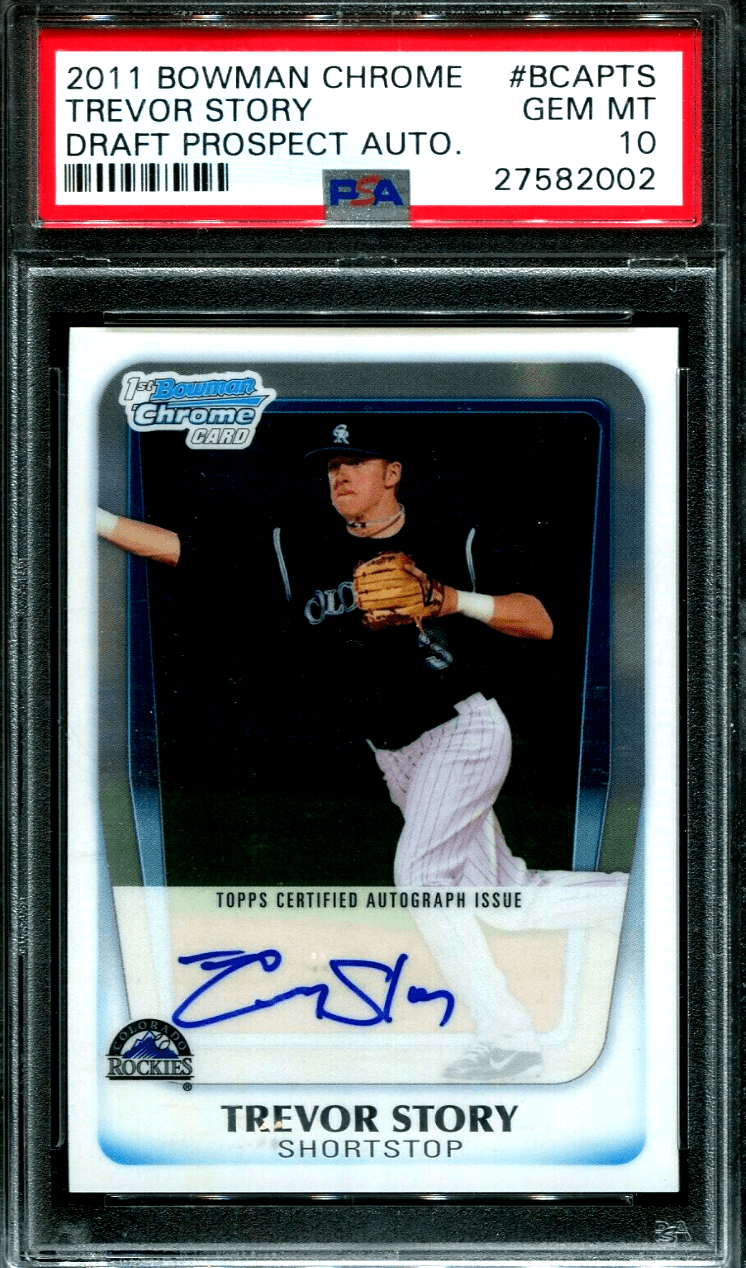 When you think of great shortstop play in the MLB you may picture amazing fielding or great leadoff hitters, but what you may not picture is a shortstop that is hitting the longest home runs in the entire league. Trevor Story is that player and his power for the position is remarkable.

Trevor Story broke onto the MLB scene in a big way during his 2016 rookie season as he came out swinging. Story would hit home runs in each of his first four games, an MLB record, and his power has remained obvious ever since as he has continued to bash the ball.

The Colorado Rockies drafted Story with a first-round pick and instead of playing baseball at Louisiana State University as he had planned, he signed a professional contract. Story then paid his dues and worked his way up the minor-league ladder until a Jose Reyes suspension opened an opportunity for him to make his MLB debut in 2016.

Story would have one of the most prolific debuts of any rookie in recent memory as he would hit two home runs, starting a tear that would last throughout the month and earn him the National League Rookie of the Month Award. Those first two home runs had the added distinction of being hit off of ace Zack Greinke, who at that time was playing for the Arizona Diamondbacks.

In early 2020, Story signed a two-year extension that will keep him with the Rockies through 2022.  The deal is worth $27.5 million dollars and covers the final two years of arbitration eligibility that Story had remaining.

Story has plenty of rookie cards and some were made when he was drafted in 2011, while others were made around his debut in 2016. Here are three of the best for investors.

This card is from the Bowman Chrome set, a very respected set in the industry, and features Story wearing a Rockies jersey and fielding a ball from his shortstop position. This card was made in 2011 when Story was drafted and features a small scouting report on Story on the back of the card.

Story has all five tools in his toolbox and the scouting report on the back of the card reflects that. It even mentions the fun fact that Story was able to hit the mid-90s as a pitcher.

This card was produced in a large quantity and thus may not be the most attractive for investors, but a 2011 Bowman Chrome Draft Prospects Autograph Trevor Story card also exists which is just a limited, unique edition of this card. The latter card is one of the most sought-after Story cards and may be of more interest to those looking to make a significant investment in the young slugger. 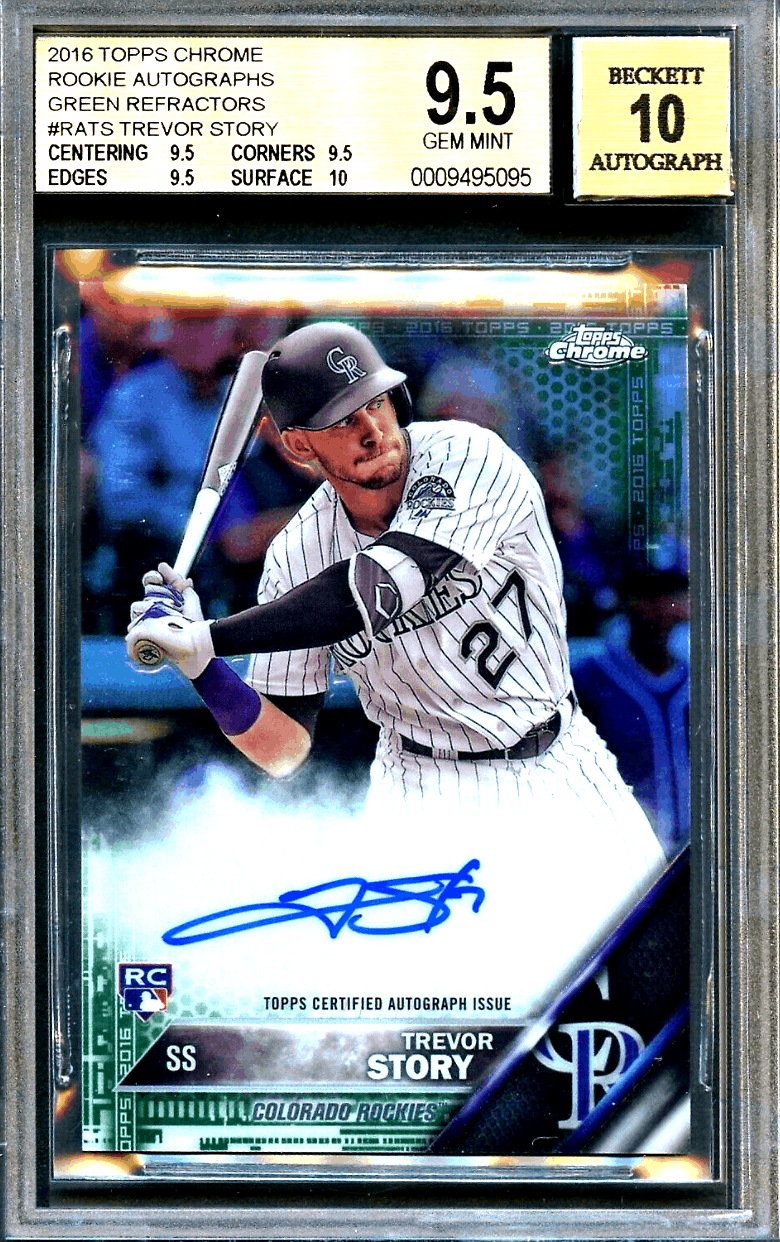 Story made his MLB debut in 2016 and therefore another round of rookie cards were made at this time. Topps Chrome is one of the most popular sets year-after-year and they are especially popular because of the numerous refractors that are included.

For Story it is no different, his 2016 Topps Chrome card comes in many different colored refractors, each with a different rarity. The SuperFractors and Printing Plate cards are both number one-of-one but there are plenty of other refractors that were produced in larger print runs.

The strong brand name of Topps Chrome will help this card hold value and the more limited colored refractor cards will be extremely valuable due to their limited quantity.

This card features a young Trevor Story, with a bat slung over his shoulder, posing for the camera. It has a Topps certified autograph on the card which helps the cards value immensely compared to the non-autograph version.

For investors, this may be a great option as autograph and rookie cards are possible the two most desirable qualities on a card and this one features both. If Story can continue on the trajectory that he is currently on, this card will be one of the most popular Story rookie cards.

Story rookie cards are valued about right based on his body of work to date… being in Coors Field should only improve the value of Trevor Story rookie cards over the next few years… if the Rockies could somehow make the Playoffs or even God forbid the World Series the ROI on his RC would soar (assuming he plays a major role).

His most valuable rookie card, in general, should be the 2011 Bowman Chrome Auto Refractor (i.e. Orange Refractor).

As a young, hard-hitting slugger Story has quickly turned into a fan favorite in Colorado as the fans watch in amazement as ball after ball easily soars over the back fence. Story had the longest home run of the entire 2018 MLB season and was the fastest shortstop to hit one hundred home runs in MLB history.

As Story continues to play in the MLB and gain experience, he will only become a more lethal batter as he is better able to pick his stops and cut down on the strikeouts that come with his aggressive approach at the plate.

Story’s batting numbers are only aided by the fact that he plays in the very hitter-friendly Coors Field. Colorado has also done a great job at setting the team up for the future and Story is just one cog in a team that looks to be strong contenders in the near future.

Overall, Story looks to be a major player in the future of baseball, and investors who have one of these cards in their collection should look forward to what is to come.