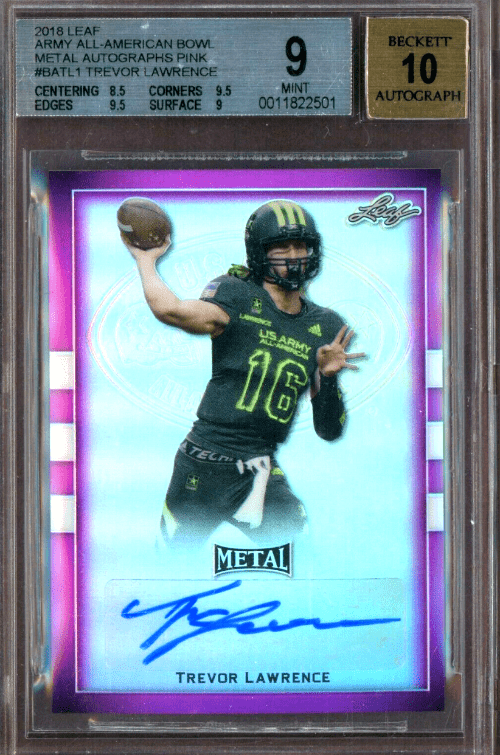 Trevor Lawrence (10/6/1999) is a Pro-Style Quarterback who plays college football for the Clemson Tigers. He has NFL scouts drooling all over themselves and is the likely number one pick in the 2021 NFL Draft (right now the most likely landing spots are the Jacksonville Jaguars or the New York Jets).

As a freshman at Clemson, he won the National Title while tossing 30 touchdown passes to only four interceptions. Many pro scouts are comparing Trevor to John Elway with both the arm and wheels when needed (Lawrence rushed for 563 yards in 2019 with 9 rushing touchdowns).

Obviously, his rookie cards are going to be a hot ticket item and probably the most sought-after rookie card since Zion Williamson joined the NBA (drafted by New Orleans Pelicans). 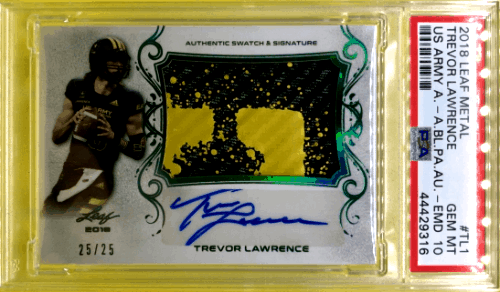 If you’re looking to spend some serious cash on an early release Trevor Lawrence rookie card look no further than the 2018 Leaf US Army All-American Bowl Patch/Auto.

Numbered #LT1 shows Trevor dropping back to pass looking for an open wideout or tight end. His name is found towards the bottom right corner while his autograph is placed just above his name. The words Leaf and /25 can be found in the bottom left corner while the game used patch takes up the top right portion of the card.

A super-rare Trevor Lawrence rookie card that has collectors salivating for more. 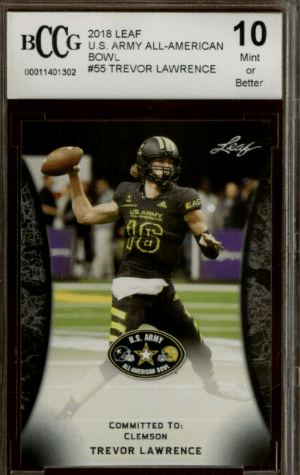 The 2018 Leaf Metal All-American Bowl Trevor Lawrence rookie card isn’t nearly as rare as the above but still comes with a somewhat hefty price tag.

Numbered #55 the card shows Lawrence in the midst of riffling the football downfield for a 20 yard gain. The bottom of the card reads “Committed To: Clemson Trevor Lawrence”. The Leaf logo is placed in the top right corner while the U.S. Army All American Bowl logo sits at dead center.

The 2018 Trevor Lawrence Leaf Army A/A Bowl Metal Auto rookie card might be the best looking of all his rookie cards to date (in particular the pink).

Numbered #BATL1 the card shows Lawrence tossing the pigskin down the field with a gorgeous pink border. His name and auto are centered at the bottom while the Leaf logo is position in the top right corner. 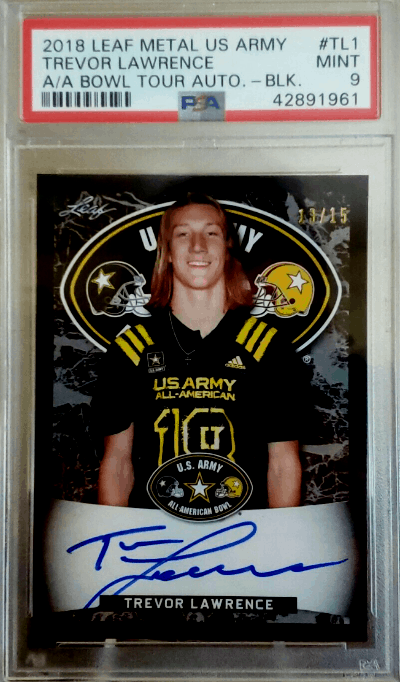 Numbered #TL1 the card shows Lawrence with a goofy-ass grin on his face while sporting the black US Army AA Bowl jersey. His name and auto set centered at the bottom while the number /15 is placed in the top right. 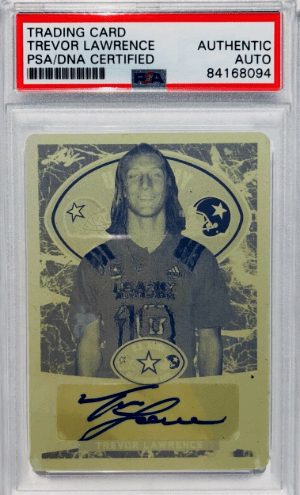 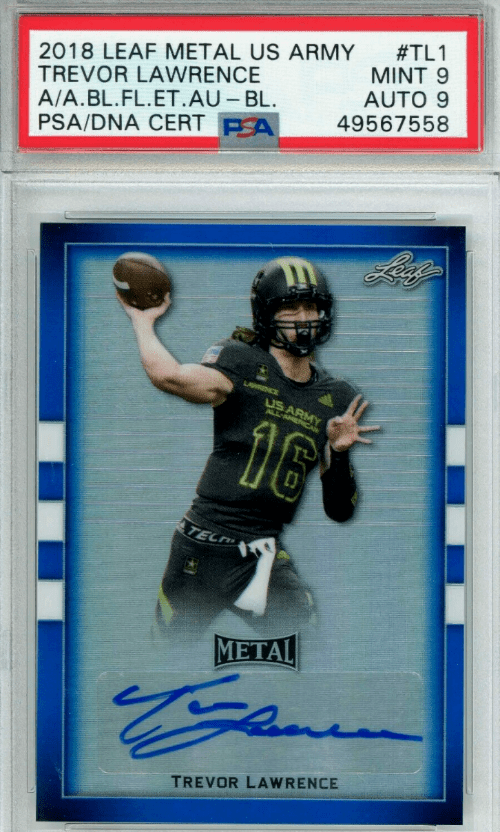 If you are looking to purchase a Trevor Lawrence rookie card but are unsure what to buy please email us at advice@goldcardauctions.com.

We usually try to be somewhat skeptical of highly touted prospects as we all know many of them to fail to live up to their billing BUT Mr. Lawrence is different.

We are putting our name on the can’t miss Trevor Lawrence bandwagon and we think he will be an elite QB in the NFL within a few years of arrival.

Trevor Lawrence, Joe Burrow, and Justin Herbert are the future of the NFL and all are must-have card investments

Having said that we are waiting until 2021 to invest in Lawrence BUT if you would like to invest now we suggest looking at the 2018 Trevor Lawrence Leaf Army All American Bowl rookie card #55 at high grades (i.e. BGS 9.5 or PSA 10).