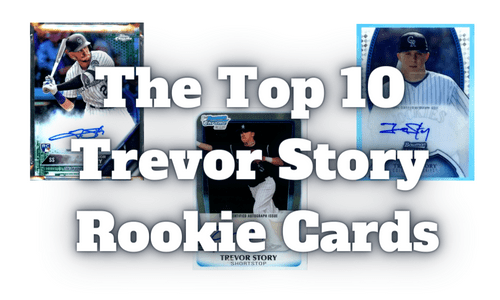 Shortstop is one of every baseball team’s most important defensive positions. They play a crucial role in the defense and are often one of the most active defense members other than the pitcher.

As a result, every team needs to acquire a good shortstop. Trevor Story has emerged as one of the best shortstops in the MLB in recent years.

Trevor Story was drafted in 2011 by the Colorado Rockies, but he did not break into the MLB until 2016.

He seriously started his career, hitting a home run in his first four games. This MLB record put him on the map as a player. He was named the National League Rookie of the Month to start his career. However, a lot happened between Trevor Story’s draft in 2011 and his MLB debut in 2016.

He took an interesting path to the pros as he opted to immediately sign a professional contract instead of competing at Louisiana State University. He then spent five years in the minor leagues until he could join the big club.

Trevor Story spent the first six-year of his career with the team that drafted him, the Colorado Rockies. However, he recently left the Rockies to sign a $140 million contract with the Boston Red Sox.

Mr. Story has an exciting set of rookie cards because some were printed when he was drafted in 2011, and others were made in 2016 when he made his debut.

As a result, you could add two to your collection and have a unique story for each of them.

As we mentioned above, Trevor Story’s rookie cards can be a little confusing to those that do not know his background. Since his draft and debut were so far apart, his rookie cards are from 2011 and 2016.

Here we will look at a few of the best options for collectors, including at least one from each year. 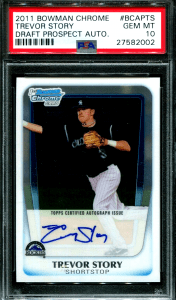 Released in 2011, most people that picked this card up at the time had no idea they had a gem on their hands.

It comes from the Bowman Chrome set, a respected set in the industry.

The image on the card shows Trevor Story in a black Rockies jersey as he fields a ball from the shortstop position.

Since the card is from his draft year, there is a short scouting report on the back.

Unfortunately, this card was mass-produced, and as a result, it is not very valuable to investors.

As a result, you might not know why we listed it, but there is a reason.

The reason we listed this card is that there is an autographed version of it that is very limited.

As a result, investors are very interested in purchasing the autographed version. 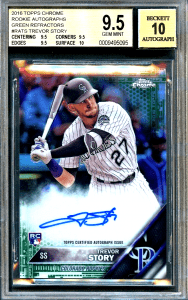 When Trevor Story made his MLB debut in 2016, another round of rookie cards was released.

This time, Topps Chrome made some of the best and most popular Story rookie cards.

Topps Chrome is one of the most recognizable and popular brands in the industry because of the refractors that come with the cards.

The Trevor Story rookie card from Topps is no different as it comes in several colors, each with a different rarity.

The SuperFractors and Printing Plate versions of the cards are numbered one by one.

Since these cards come from a popular brand, they should hold their value for a long time.

Additionally, the rarer versions should increase in value over time because of their limited quantity. 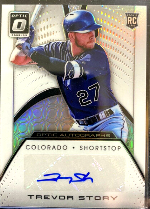 The final card we want to look at today is from Trevor Story’s rookie season.

Released in 2016 by Donruss, this card features Story in his blue Rockies uniform as he gets ready for a pitch.

You can see the Optic logo on the top left of the card, but that isn’t the main draw.

Instead, the main draw of the card is the autograph at the bottom.

The autographed versions of these cards are limited, and as a result, they are a big draw for investors. The autographs are authentic.

The value of most cards is based on the player’s body of work. As a result, Trevor Story’s rookie cards hold decent value.

However, if he continues his successful career, they could certainly rise in price.

That being said, it is essential to remember that Story is 29, and as a result, he could reach the downswing of his career soon.

Another factor to consider is that Story just signed with the Boston Red Sox.

The Red Sox is one of the MLB’s most prominent organizations; if he performs well there, his cards could become even more valuable.

If you want to get the estimated value of your Trevor Story rookie card, you can contact us via email or leave a comment below.

There are pros and cons to buying Trevor Story rookie cards.

He is still a good player, and signing with the Red Sox could increase his name recognition.

However, he is 29 years old, and as a result, he could start to decline soon.

If you want to invest in Trevor Story rookie cards, you should get in quickly before he starts to decline.