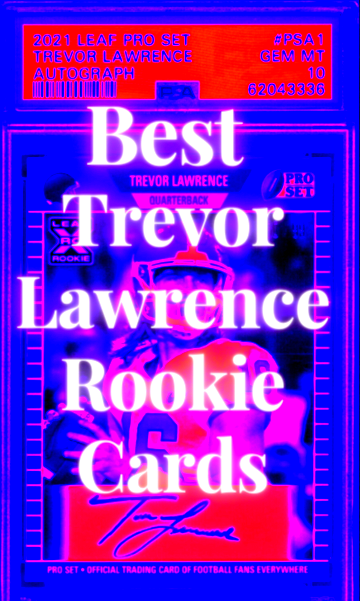 Trevor Lawrence’s rookie cards are some of the hottest cards in the hobby over the last few months, and with good reason.

He has been compared to John Elway and called the greatest ever quarterback prospect of all time.

Prior to this year, the last quarterback prospect considered to be a “can’t miss” pick was Andrew Luck in 2012.

Enter Trevor Lawrence, one of the most mechanically sound, accomplished, and highly-graded NFL quarterbacks-to-be in the past decade

.Most NFL-caliber quarterbacks take time to shine. Look no further than veterans like Tom Brady and recent top picks like Joe Burrow as evidence that becoming great sometimes takes time.

Lawrence, on the other hand, has been considered a future top NFL draft pick since before he graduated high school. Lawrence is the second-highest rated college football prospect of the past 20 years, trailing only Vince Young in terms of scouting grades. His collegiate performance did nothing to dry pro scouts’ salivary glands.

Anticipating a bright career in the League, the card collecting and trading community is seeing strong demand for Lawrence rookie cards. Or, to be more precise, his college cards, also sometimes known to some as early rookie cards.

By the way, he’s also listed as 6’6″ with a pea shooter for an arm and strong metrics in the accuracy department. Though you’ll find the rare mock draft slotting BYU’s Zach Wilson to the Jacksonville Jaguars with the #1 overall pick in the 2021 NFL Draft, the smart money is very much on Lawrence to first overall.

Here are a few Lawrence early RCs which, should you find yourself in possession of one or more, could net you a nice return.

That is if Lawrence turns out to be the Luck-level prospect that the Kippers and McShay’s of the world are expecting him to be (check back often as this is just the beginning of Trevor Lawrence and NFL rookie cards). 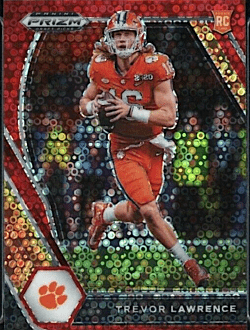 The 2021 Trevor Lawrence Prizm Draft Picks RC’s are available in various options that include autographs.

These cards are quickly becoming one of the more popular rookie cards up at eBay auctions. 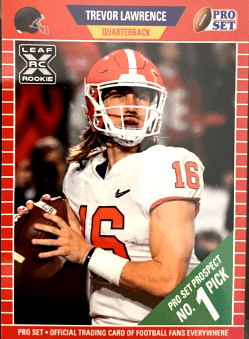 The 2021 Trevor Lawrence Pro Set RC has a release date of March 26, 2021. It showed strong demand during the pre-sale stage, and the reason could have more to do with Lawrence’s appeal as a prospect.

The design of the 2021 Pro Set rookie cards, including Lawrence’s, is a nod to the past. If the minimalist orange and white border, emoji-style football helmet in the top left corner, and text font seem retro, it’s because it is retro.

This is the same design aesthetic used in 1989 when images of rookies like Troy Aikman, Deion Sanders, and Barry Sanders graced the Pro Set paperboard.

The image and the overall card aesthetic are decidedly simple. It is also a card that you can secure at an accessible price point. Leave it up to Pro Set, nearly thirty years later, to add a couple of twists for serious collectors.

Two gems for you to hunt: a reverse-image version of the 2021 Pro Set Lawrence RC and an autographed version with a nameplate and blue-ink signature beneath Lawrence’s likeness.

These are two rarer versions of the base Pro Set RC—there will only be 1,000 reverse-image parallels in circulation—that may provide added value to your collection as Lawrence ascends into NFL prominence. 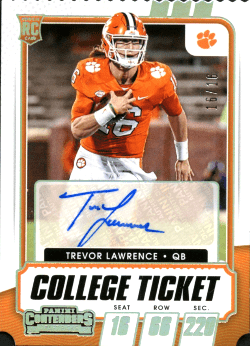 Currently, here is one of the more expensive Trevor Lawrence rookie cards. The popular Contenders brand from Panini makes its appearance on our list.

By no surprise, it is one of the most valuable 2021 football rookie cards released to date.

A great-looking card, and if you can’t wait for the more prominent brands, the 2021 Trevor Lawrence Contenders rookie card is a solid buying option. 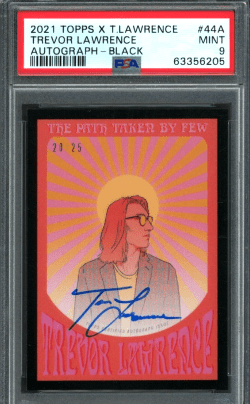 We usually don’t make investments in pre-NFL rookie cards, but we may make an exception in this case.

Topps has teamed up with Trevor’s brother and sister-in-law, both artists, to create 20 of the 50 cards in the 2021 Topps X Trevor Lawrence 50 card set, which offers a unique look at Trevor Lawrence.

We will admit they are somewhat artsy, which may turn some traditional collectors off, but we are thinking about investing in a few as they are super unique, and the art is well-done, in our opinion 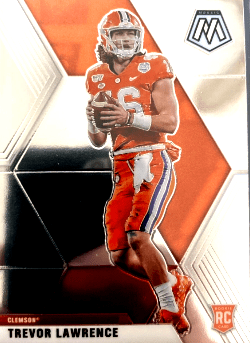 Panini Mosaic is bringing the HEAT with their 2021 Mosaic Football Draft Picks set. We have been touting how much we love the Mosaic brand and it looks like we’re not alone as they are expanding. 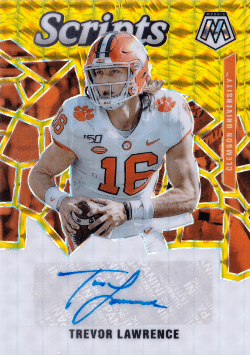 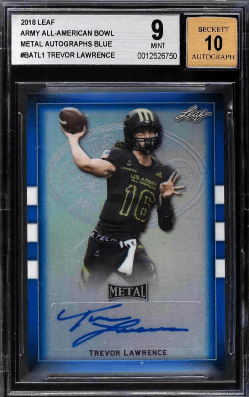 The U.S. Army-sponsored the All-American Bowl, a showcase for outstanding high school prospects, until 2018. This makes the 2018 Leaf Metal U.S. Army Trevor Lawrence RC special for another reason.

Rather than a true rookie card or even a college card, this treasure from Leaf is more of a high school card.

After all, the Lawrence you see donning a grey, U.S. Army football uniform was a high schooler at the time the image was taken.

Lawrence’s image on the Pro Set RC reflects one thing scouts love about him: his ability to stand tall in the pocket, eyes locked downfield. Wearing a white Clemson jersey (though no Clemson logos are visible) with grass stains on his right shoulder, Lawrence’s signature locks dangle out of a logo-less Clemson helmet. 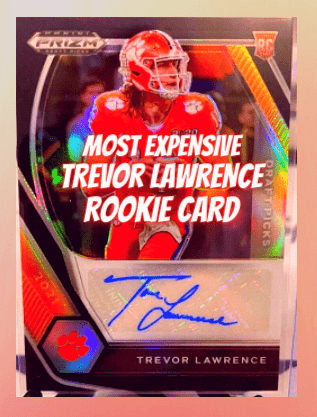 If you are looking to purchase a Trevor Lawrence rookie card but are unsure what to buy, please email us at advice@goldcardauctions.com.

Do you have a Trevor Lawrence football card and want an estimated value? Please email us at value@goldcardauctions.com or DM us on the Gold Card Auctions Facebook page.

We’ve seen the phenomenon unfold with LaMelo Ball in the NBA. When top-billed rookies live up to or exceed their professional expectations quickly, the value of their trading cards skyrockets.

Don’t be surprised when the LaMelo effect takes hold with Trevor Lawrence. Even the most sure-fire of prospects (looking at you, Todd Marinovich) can flame out. T

here is understandable restraint among trading card investors until they see the “can’t-miss” prospect, well, not miss.

If and when Lawrence proves to be the stud that most expect him to be—in Jacksonville or elsewhere—you’re going to wish you had invested in at least one of his rookie cards. As we’ve seen, there is a ripe investment opportunity no matter your budget. Take your pick.

What is a Patrick Mahomes rookie card worth?

Are rookie cards most valuable?

Rookie cards are almlost always the players most valuable card. However that is not 100% always the case.

How much is a Deshaun Watson rookie card worth?

How do you get rookie cards?