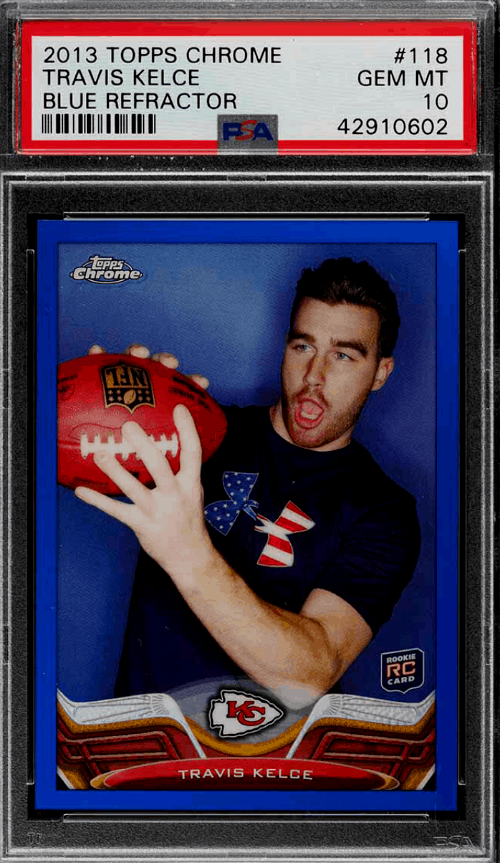 He’s been with the team ever since, winning Super Bowl LIV, making five Pro Bowl appearances, and he holds the NFL record for most seasons with 1,000 yards receiving by a tight end.

Not only is Kelce a great player but he is also on the brink of winning his second Superbowl (which we suspect he will) which should send his rookie cards even higher.

With a long list of trophies, accolades, and records to his name, his rookie cards have received a lot of interest since they were first released in ‘13. Here are three of the best Kelce RCs, along with investment advice if you’re hoping to flip a couple in the future.

We’ve looked at recent auction data to bring you a list of the top three Travis Kelce rookie cards which are available on the market right now.

Kelce’s 2013 Topps Chrome card features a shot of the player holding a football in amazement, with a deep blue background that matches his shirt. It’s different compared to the average RC, but that’s no bad thing.

Refractor parallels are where the money is at, and you’ll be able to tell the difference by checking out the border colors. His name and position are found at the bottom, along with a KC logo and an RC logo. The bottom portion is red and gold, so the red refractor is probably the best looking option overall. 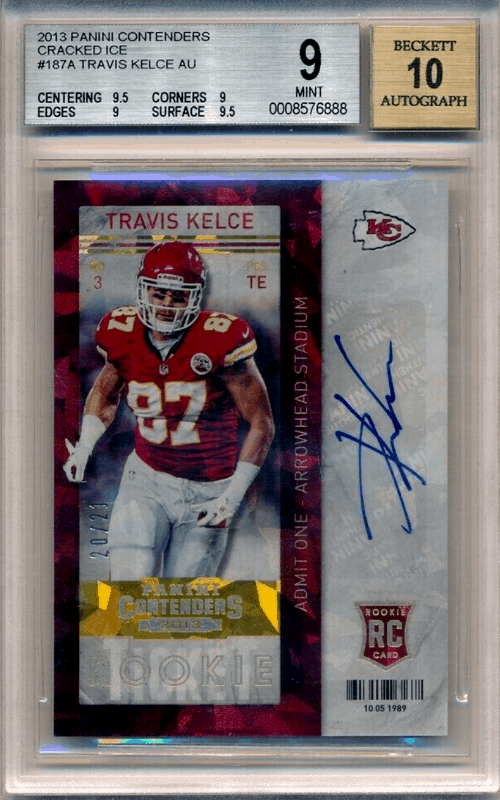 The 2013 Panini Contenders range is a great high-end option, and you’ll find Kelce’s card in the Rookie Tickets set.

There’s a large image of Kelce on the left-hand side, with a stickered auto found on a separate white segment on the right. There’s also a parallel image and different ticket versions, so there’s ample choice if you’d like to pick up a rarer edition. (Variations have no stars around the team logo helmet on the back of the card.)

The base features an image with his left hand within the border, while the variation shows his left arm on the signature side, as well as a Nike Swoosh on his shorts.

Of the versions available, the Cracked Ice card has a low serial number, (21) a slick design, and it attracts a lot of attention at auction. It’s our personal pick as an interesting investment piece. 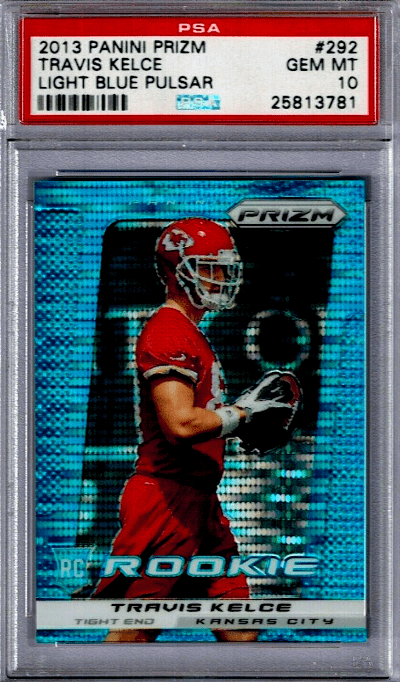 The final card to make our list is from the popular Panini Prizm range. There’s a layered image of Kelce in the middle, holding a football as he surveys the field. It comes with a  skewed Prizm border, and player info is found on a white tab at the bottom. As well as an RC logo, you’ll find a large black and white ‘Rookie’ sign, just in case you weren’t sure.

Despite being an older release, there are heaps of interesting parallels which change with the color of the outer background. These include a couple of attractive die-cut cards, although they’re rare and prone to damaging easily. Parallels are as follows; 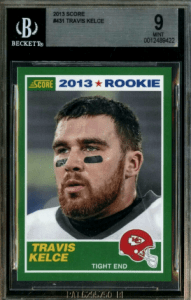 This might be the best looking of all the Travis Kelce rookie cards and comes in at one of the most affordable as well.

Looking for a great looking and affordable Travis Kelce rookie card at the same time? Check out his 2013 Score RC 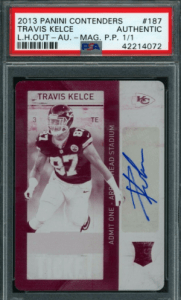 The value of Kelce rookie cards is valued correctly based on his career stats to date. If he can win another Superbowl or three the value of his rookie cards will go even higher and the odds of him winning at minimum one Superbowl are pretty decent.

Thinking about buying a Travis Kelce RC but are unsure about which one to buy? Hit us up at advice@goldcardauctions.com and we will help!

Do you have a Travis Kelce football card and would like an estimated value? Email us at value@goldcardauctions.com and include at minimum two CLEAR photos of the card.

Or you can always follow us on the Gold Card Auctions Facebook page and hit us up whenever you want about anything you want card-related. 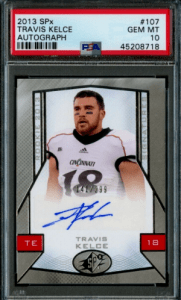 Even though Kelce had been suspended for an entire season during college for failing a drug test, he’s matured into a real leader in recent years. He’s already a legend for the Chiefs, and they were right to take a chance on him.

The tight end is in a class of his own, posting at least 72 catches, 875 yards, and four touchdowns in the previous five consecutive seasons. He signed a five-year, $46 million contract extension back in 2016, so he’ll have to decide on his future soon. Will he stay with the Chiefs?

The real question is him many Superbowl rings will he collect? Two, Three, maybe five? Whatever the number he already is one of the best tight ends the NFL has ever seen.

If ever there was a candidate for a future Hall of Fame spot, Kelce is likely to be in with a great chance when his name is available on the ballot.

For now, Kelce’s rookie cards aren’t the most expensive, and there are lots of options that suit almost every budget. Each of the cards we’ve mentioned is relatively affordable if you’re looking at base versions, so it’s not hard to pick them up cheaply.

The real money is found in the rare parallels, many of which are serial-numbered to fewer than 100 copies. They should be a great long-term investment if you’re willing to hold until he retires.