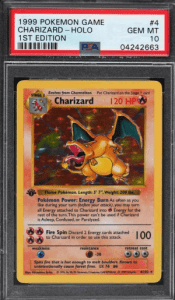 First Edition Pokemon cards have been a sensation for over two decades. Originating in Japan, Pokemon has exploded in popularity in the west and is one of the largest media franchises. It started as a video game but evolved into a trading card game at the end of the 90s.

There are many reasons that Pokemon cards are popular amongst kids and adults alike, but one of them is the catchphrase, “Gotta Catch ‘Em All.” With a phrase like that, people feel like they need to buy new packs so they do not miss out on new Pokemon.

Whenever a new pack is released, it comes with cards of different rarities. Although it is different for every pack, most usually include several common cards and a few rare cards.

We are basing our top 10 on their value and popularity. We will mostly consider value, but we use popularity as a tiebreaker.

When you think of Pokemon, there are a few species that probably come to your mind first. Almost everyone will have Charizard as one of the first three Pokemon they think of, and for good reason.

Not only is Charizard iconic, but it’s just a cool Pokemon in general. It’s a fire-breathing dragon in its strongest form. Why would you not think of that Pokemon first? So, it should not be a surprise that it tops our list of First Edition Pokemon cards.

There are a few things that make this card stand out, but the thing that really makes it great is its simplicity. So many cards these days go over the top with their art, and they forget that simplicity is sometimes better.

This card has the iconic Charizard design from the 90s because it was released in 1999. It is the holy grail of First Edition Pokemon cards. If you had this card as a kid in the early 2000s, you were like a king.

These days, if you have this card, you are in for a big payday. Cards like this one consistently sell for hundreds of thousands of dollars. In fact, there was a report that a card sold for $369,000 in December 2020. 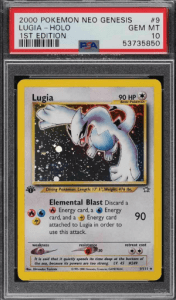 Charizard might be the poster child for Generation 1, but Lugia is the poster boy of Generation 2. Part of what makes this card so possible is that Lugia was the star of Pokemon The Movie 2000. It was also on the box art for Pokemon Silver on Gameboy.

The card itself features a white Lugia, the Elemental Blast ability, and a health pool of 90. It has a unique yellow border. 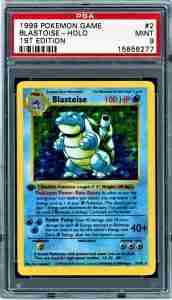 If you like water more than fire, you should consider trying to get your hands on this Blastoise card. However, it will not come cheap as recent mint condition copies have sold for nearly $50,000.

This card features a blue background to fit the water theme. Blastoise is looking strong in its image, and you have access to the Hydro Pump ability.

An interesting thing about this card is that a PSA 10 copy is worth roughly the same amount as a PSA 9 copy of the Charizard card listed above. Only 100 PSA 10 copies of this card are known to exist. 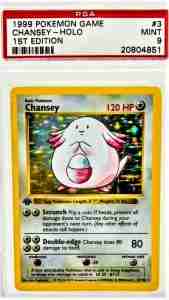 You might be surprised to see a Chansey card as the fourth card on our list, but there’s a good reason for that. On paper, Chansey is not the fourth most popular card, but its design makes mint condition copies very valuable.

This card has a very clear holographic area, and as a result, it is very easy to spot print imperfections. So, there are very few high-grade copies of this card. In fact, only 48 PSA 10 copies exist. Rarity drives value, and that is why this card can sell for nearly $40,000. 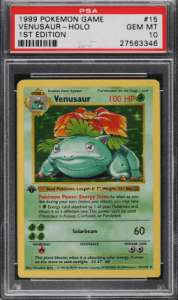 Venusaur is one of the most popular Pokemon, so it might be surprising to see it this far down the list. On paper, it should be higher, but there are more PSA 10 copies of this card than any other First Edition Pokemon cards. 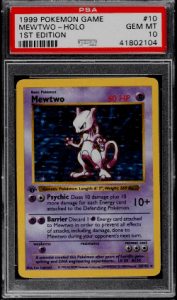 Mewtwo is another one of the Pokemon that has only gotten more popular over the years. As new Pokemon get released, Mewtwo remains amongst the most popular. As a result, it should be no surprise to see this card in the middle of our top 10.

If you pulled this card from a pack, you would be thrilled. However, it is unlikely that you get a mint condition copy. Only 81 PSA 10 copies are known to be in circulation. Those copies can sell for around $22,000. 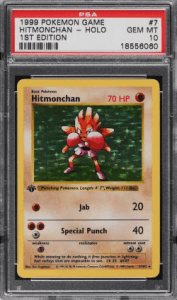 Hitmonchan might be a surprise entry at this point in our list, but it is a deserving one. It might not be everyone’s favorite, but it is a great card with some incredible value.

While there are some cards that you might want more (like Mewtwo), this card holds more value. The reason for that is there are very few mint condition copies in circulation. Only 56 PSA 10 copies are known to exist.

As a result, recent copies have sold for around $23,000, and we expect that number to only increase as time passes. 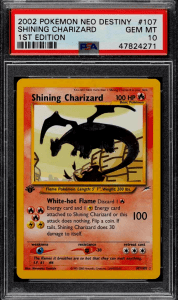 As we mentioned at the start of this list, Charizard is probably the most popular Pokemon. As a result, it should not be surprising to see another First Edition Charizard card on our list.

This copy comes from the Neo Destiny set, widely regarded as one of the best sets ever. What makes this set so great is that there are eight secret rare “shining” cards. So, the holofoil is on the character rather than the background.

Charizard is always going to lead the way in value in a pack, but there is a high PSA 10 population compared to other cards on this list. 229 PSA 10 copies of this card exist. However, it can still sell for around $20,000 at auction. 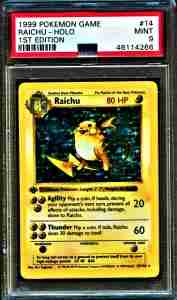 Pikachu is arguably the most well-known species of Pokemon, and as a result, it should not be a surprise for its evolution to be popular.

This card has a beautiful yellow background, sticking with the theme of electricity. You can see Raichu in all its power, and its lightning bolt tail is very prominent.

There are 87 PSA 10 copies of this card in circulation, and as a result, it is a valuable option for collectors. The most expensive copies have sold for $$17,000. 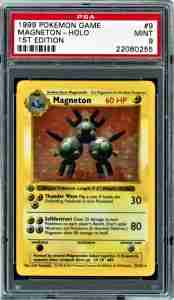 Magneton is an understated Pokemon, but if you polled kids, we’d be willing to bet that they love this species. There’s something about its design that makes it stand out. As a result, we are including it as the final card on our list of the best First Edition Pokemon cards.

However, that is not the only reason as this card is still very valuable. There are only 64 PSA 10 copies in existence, and as a result, they can be sold for around $17,000 at auction.

Although we cannot provide a blanket statement for every First Edition Pokemon card, we can say that we are confident that they will increase in value in the coming years.

Old cards are always going to be valuable, and we do not expect the value of the 10 cards listed above to decrease any time soon.

As a result, if you have some extra money, do not hesitate to try to get your hands on one of these 10 cards.