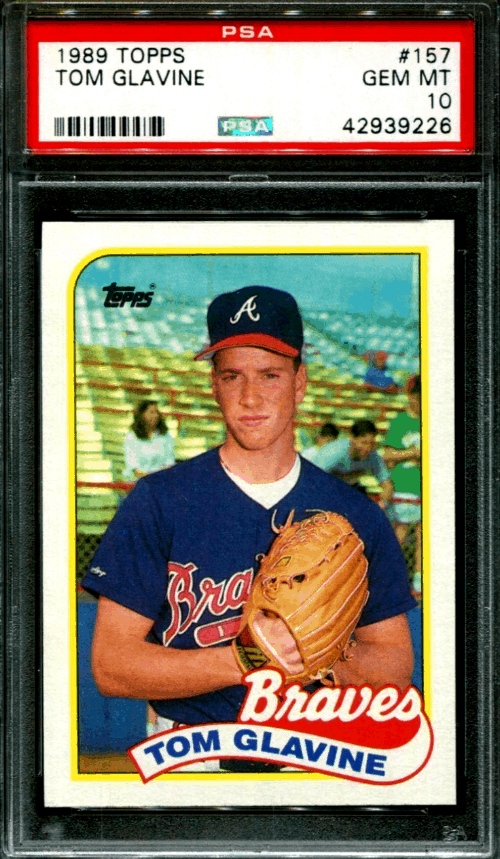 Glavine was part of the Braves’ “Big 3” pitching rotation that dominated the National League East for almost a decade along with John Smoltz and Greg Maddux, while he’s a ten-time All-Star who also won the World Series in ‘95.

Here’s everything you need to know about the top three Tom Glavine rookie cards, with investment advice looking at the next few years.

Below are the best Glavine rookie cards money can buy!

Mr. Glavine looks around 12 years old in his Topps Tiffany rookie card but boy, is it worth some cash. It should also have the best ROI out of all his rookie cards.

As the only Hall of Famer in the 1988 Topps set, Glavine’s card is more popular than most. It features a blue border and a large portrait photograph of the pitcher while the team name is placed behind his head. It’s a simple card, although there is another option if you’d like a more premium version instead.

You could look for the rarer Topps Tiffany card, although the set came with a print run of 25,000 copies, so it’s still reasonably plentiful. (You’ll be able to identify it via the glossy coating on the front or by looking at the number of stars on the back of the card.)

Gem mint copies will sell for more than average, though low-graded copies are almost worthless.

The 1988 Score Glossy features an action shot of the player during a pitch, with the ball captured blurrily as it leaves his hands. As the name suggests, it has a glossy finish, while bright orange background notes he’s a rookie prospect.

As with the Topps Tiffany, the Glossy version is an upgrade on the normal Scorecard. Unlike the Tiffany version, it’s pretty rare for the time, with a reported print run of only 5,000. It’s scarce enough to make it a decent investment piece, while the orange edges aren’t ideal if you’re worried about the overall condition.

Like the Topps card above, the 1988 Donruss also has a portrait shot of the rookie with a stadium in the background.

It’s slightly zoomed out in comparison, with a weird border that matches up with his Braves jersey.

No special editions exist, and even high-grade copies don’t sell for much at auction. Supply outweighs demand, and it doesn’t look set to change anytime soon.

Regardless, gem mint copies still attract a lot of bids, even if the price isn’t exceptionally high.

Email us at advice@goldcardauctions.com if you would like buying advice in regards to any sports card you are interested in.

Glavine was a hell of a player and helped the Braves to their first World Series win in almost 40 years.

It was a significant era, but Glavine was the one who eventually signed with the Mets, ending the Big Three’s time together in Atlanta. He’s still seen as a legend in the city, and the franchise retired their number 47 in his honor.

Of course, his RCs were all released during the height of the junk wax era, so each of the sets listed above was overproduced to a ridiculous extent. That’s why they’re still so cheap today, even when looking at gem mint versions of the best cards.

There’s also a distinct lack of player patches or hard-signed editions, which is understandable, but still disappointing compared to what we’re used to today.

Unique versions are a saving grace, although we’d look to later cards if you’re looking for more exciting options or purchasing a Glavine card solely as an investment piece for the future.

For example, his 2001 Topps Heritage autograph (#THA-TG) is rare, with just 200 copies of the base and a red version that is hand-numbered to just 52. There are many options out there, and many are likely to be a much better investment if you’re planning to hold in the long term.