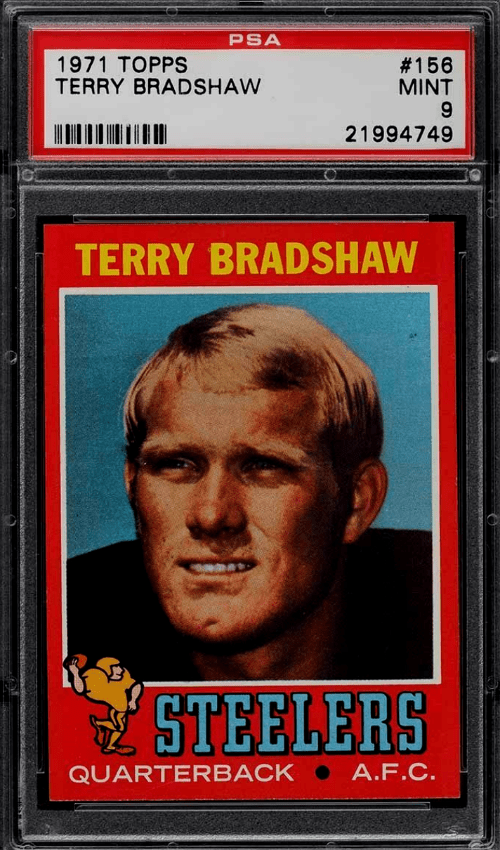 A true legend, here’s a rundown with three top Terry Bradshaw cards, as well as an investment outlook for the future.

Bradshaw has had a range of cards released over the years, including signed options with low serial numbers from recent releases.

However, his older cards are more popular with collectors and investors, so we’ve focused on them specifically for the purposes of this list.

Seen as the top card from the 1971 Topps set, Bradshaw’s RC is a great option if you’re looking at higher PSA grades. As with all AFC players that year, it comes with a deep red border, featuring a close-up profile shot of the QB. The blue sky background plays to the vintage feel, and there’s a great Steelers logo at the bottom.

As his only recognized RC, it’s the priciest card on the list by a fair margin when looking at gem mint copies. The red edging is susceptible to chips, as well as wear on the front of the card. At high grades, it’s difficult to find a better investment piece overall. 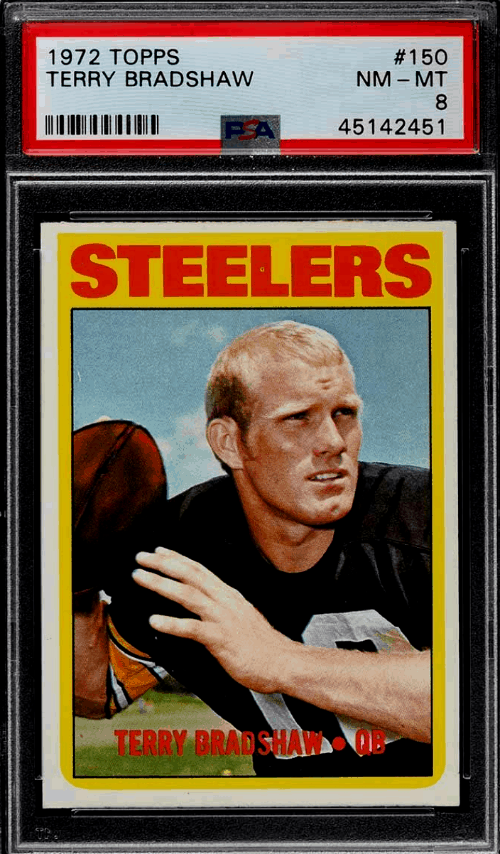 Another solid vintage option that was released a year later, the 1972 Topps is worth checking out. It has a strong image of the player as he prepares to throw a football, along with a blue sky background. It all adds to the ‘70s feel, which is no bad thing.

The solid yellow border and red text aren’t a common design choice in modern times, but it makes the card pop, and it’s instantly recognizable as a product from its era. It might not match up to the RC above in terms of value, but it’s a stunning card nonetheless.

Next up is a card from 1997, 14 years after Bradshaw retired. The ‘97 Upper Deck Sign of the Times is a great release, with a unique bumpy finish that makes it standout. (It’s supposed to look like a football, which explains the strange design choice.)

Must Read: 5 Underrated Mike Trout Baseball Cards That Will Skyrocket Your ROI

The landscape card has a vintage image of Bradshaw, alongside a white football-shaped section to allow for a solid autograph, filled in blue ink. The Sign of the Times and UD logos are given a chrome finish, as well as his name, which is located near the player image. It’s more affordable than the others, but it’s still a great piece of signed merch.

We see no major price movements (up or down) over the foreseeable future and they should only steadily increase.

As a living legend, Bradshaw is still an influential figure in the sport. He’s currently a sports analyst and co-host of NFL Fox Sunday, so he’s still in the public eye, and it’s not like anyone is going to forget about his collection of rings anytime soon.

Despite the lack of signed options and parallels in the 1970s and ‘80s, his older cards are some of the best investment cards from the era. They’re still affordable considering his status as a Hall of Famer, while many are about to reach their 50th year of existence.

Expect prices to climb past the anniversary, as Bradshaw is still remembered as one of the best QBs ever.

There are lots of signed options from later years, but it’s a good idea to stick with his RC if you’re looking for an investment option with the best chance of providing an ROI in the future. (As always, graded versions are preferable.)