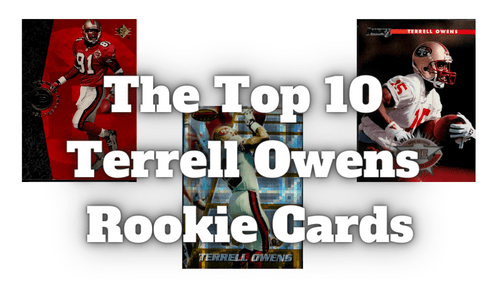 Terrell Owens (12/07/73) is a former wide receiver who played for the San Francisco 49ers, Philadelphia Eagles, Dallas Cowboys, Buffalo Bills, Cincinnati Bengals, Allen Wranglers, and the Seattle Seahawks, respectively, during a legendary career. He holds many NFL and franchise records for many of the teams he graced along the way.

For example, he’s the only player in NFL history to have an 800-yard receiving season with five different teams. He shares the Cowboys’ record of most consecutive games with a receiving touchdown (7) with Franklin Clarke, Bob Hayes, and Dez Bryant.

Almost a decade from his retirement, we’ve come up with a list containing three top Terrell Owens rookie cards to keep an eye on and an investment outlook for the next few years.

Owens’ rookie cards were released in 1996 when the 49ers drafted him as a third-round pick (89th overall). According to recent auction data, here’s a trio of his top RC cards.

Arguably the most popular Owens RC overall, everything about his 1996 Bowman’s Best works to catch the eye. It’s printed on sleek chromium card stock, while the layered design causes the player to appear as if he’s jumping out of the background. It’s supposed to mimic a football field and does the job well.

Owens is pictured leaping into the sky to make a catch with a ball in hand, although the image is side on, so his face is completely obscured. The Atomic Refractor is particularly appealing, but it’s a condition-sensitive option. 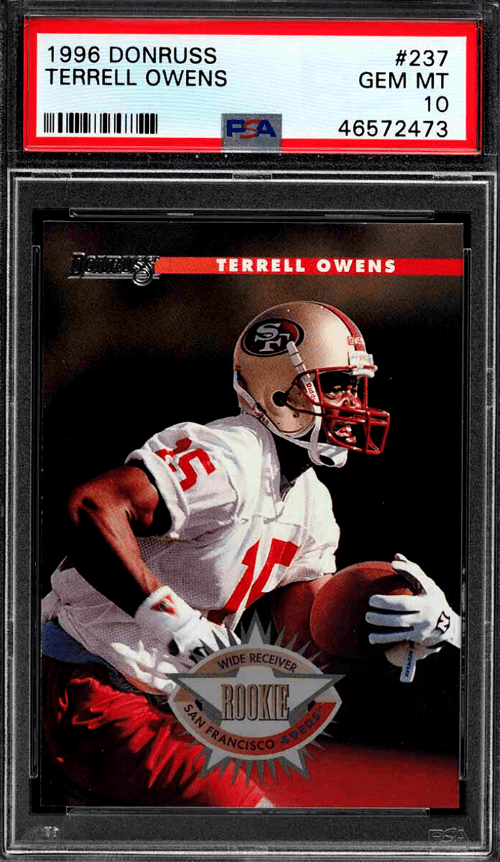 Ideal if you’re hoping for a budget RC, the 1996 Donruss is a great looking card with a clean background. A large action shot takes up the majority of the card, in an understated design, especially for the ‘90s. Owens is pictured in full sprint with a football tucked under one arm, with his teeth gritted in determination. His name is listed along a small bar at the top, and there’s a silver Rookie logo in the lower middle.

As there’s a distinct lack of chrome compared to the others, it’s easier to find gem mint copies that retail for under $100, but it’ll still receive a lot of attention at auction. There’s also a Donruss Press Proof parallel with gold foil highlights and a print run of 2000 copies. 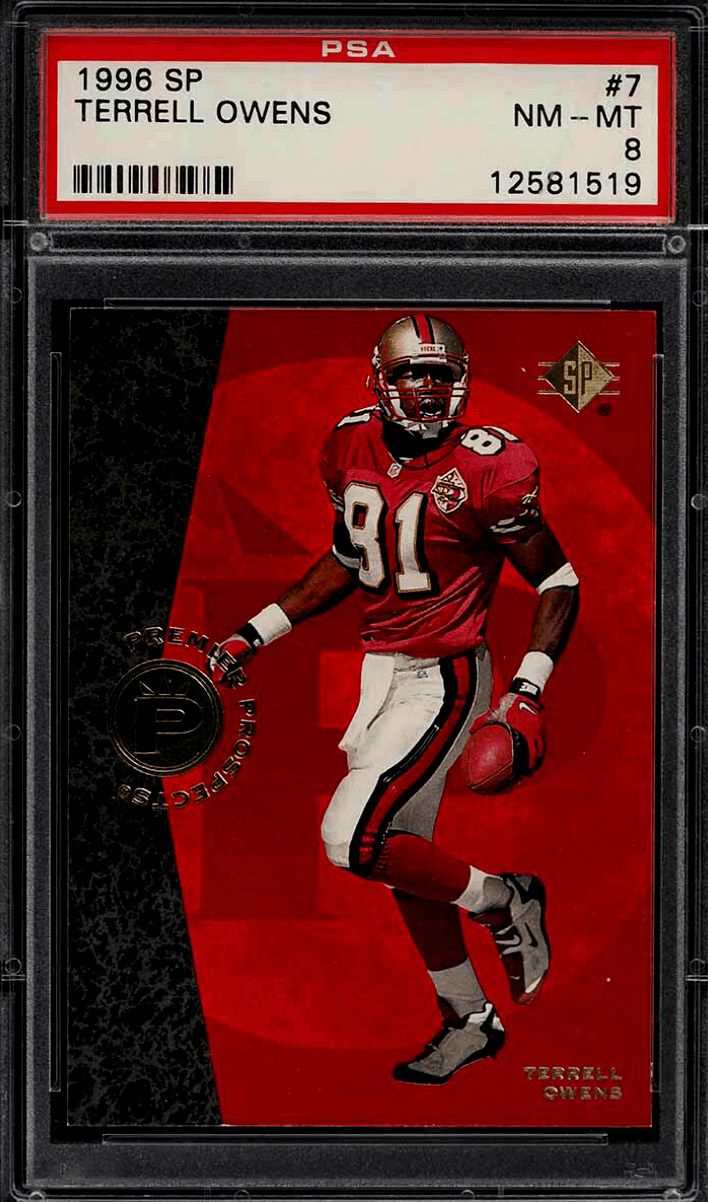 The 1996 SP Owens RC is a premium card with a deep red and black background that blends in well with his 49ers jersey. It has a gold trim for the player name and card logos. Owens pops out of the card, and it’s probably the best-looking edition out of the trio on this list. Unfortunately, it’s also one of the more expensive for reasons that are evident when you look closely.

It’s condition sensitive, so high PSA grades will always be worth more to the average collector. Any nick or scratch will be instantly recognizable, especially on the red corners on the right.

T.O. will always be seen as one of the very best of his era, even if some detractors would rather speak about his conduct instead of celebrating his many talents. His numbers are insane, and he comes in at third in career receiving yards (15,934) and third in receiving touchdowns at 153 on the all-time list.

Despite several minor off-field issues (such as numerous fines for his celebrations), despite the lack of a Super Bowl ring, Owens is a real star of the past two decades. He missed out on a Hall of Fame spot during his first two years of eligibility but was eventually inducted in 2018. In typical fashion, he became the only inductee to skip the ceremony.

He’s likely to be remembered well over the next decade, while nostalgia is already working in his favor regarding the value of his best RC options. Owens has several rookie cards, with something to suit almost every budget. Despite the condition-sensitive nature of options like the 1996 SP, they’re still reasonably priced, and they missed the junk wax era by a few years, so the print runs aren’t as bad as you might expect.

If you’re in the mood for a long-term investment, Owens’ range of ‘96 rookie cards could be a great option if you’re willing to hold onto them for a while. After all, prices have slowly risen over the past decade, especially following his retirement in 2012. Just have an obnoxious celebration prepared for when you’re ready to sell in honor of T.O. and his legacy.