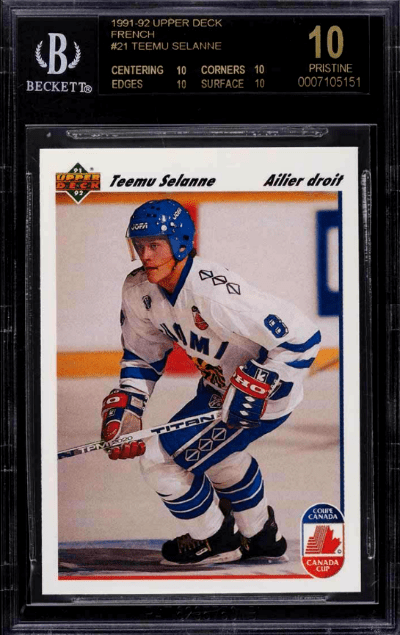 Teemu Selanne (07/03/70) is a former winger who spent 21 seasons in the NHL. Known as ‘The Finnish Flash,’ he played for the Winnipeg Jets, Anaheim Ducks, San Jose Sharks, and the Colorado Avalanche, respectively.

A Stanley Cup winner in 2007, he still holds several franchise records for Anaheim, including the most goals in a single season and the NHL record for the most goals and points by a rookie back in 92/93.

Teemu Selanne Rookie Stats: Teemu had a mind-blowing 76 goals as a rookie to go along with 56 assists for a total of 132 points… WOW, no wonder he won rookie of the year.

Here’s the lowdown on Selanne’s best rookie card options, with a couple of top choices to go along with an investment outlook looking at the next few years.

Selanne has just one rookie card to keep an eye out for. (Well, there are two, but one is a variation of the other!)

The original Selanne RC was released during the 1991-92 season. The player is featured in his Finland international kit while on the ice, as he was participating in the Canada Cup tournament at the time.

In an Upper Deck release, the action shot takes up most of the card, with a name, UD logo, and his position (Right Wing) located on the top borderline.

It’s the same card as before, with a significant difference if you take the time to look a little closer.

It earns the ‘French’ moniker as it lists his position as; “Ailier droit”, which translates to “Right Wing.” Like the base Upper Deck version, there’s no autograph, although the player has signed many cards in the following years.

Also to note on the Selanne Parkhurst rookie card comes in two versions; base and Emerald Ice.

The Emerald Ice is slightly rarer than the base and can be recognized by the Emerald Green shiny-looking Parkhurst Logo in the bottom left-hand corner of the card.

Teemu Selanne’s most affordable rookie card, i.e., least expensive? Check out the 1992 Pinnacle Score Teemu Selanne RC #406, as it can be purchased for a few dollars.

If you would like an estimated value of your Teemu Selanne rookie card, please email us a minimum of two photos (back and front) to value@goldcardauctions.com or DM us on the Gold Card Auctions Facebook Page.

Selanne is 12th in the all-time list of goal scorers in the NHL, although he’s still over 200 behind the likes of the legendary Wayne Gretzky. Regardless, his cards are well-valued by collectors in the hobby, who understands his role as one of the best goal-scorers of his generation.

In the present day, Selanne owns a restaurant in Laguna Beach, while his son Eetu plays hockey and is seen as a decent prospect heading into 2020. Selanne Sr. is a hero in Anaheim and Finland, so you’d expect his cards to be slightly more expensive.

Almost everything points to his collectibles being underpriced, especially considering his records, many of which are still held to this day. Unfortunately, there’s a reason why they’re pretty cheap.

His cards were released in an era in which the average RC was vastly overproduced, so it’s possible to add a trio of PSA 10’s to your collection today and still have changed from a $100 bill. Despite only one card to pick up, the supply outweighs the demand.

Considering the low prices, his cards could see some movement in the proceeding years, although it’s hard to see them ramping up drastically. Selanne’s RCs are a safe investment, but you could find a better ROI by looking at more recent options.

CTA – Selanne’s RCs might not be able to match the likes of Gretzky or Ozzie Smith, while they’re a world away from the Honus Wagner T206. Regardless, it’s a chance for any Ducks fan to pick up the mightiest of their former players for a great price.

For more investment tips, check out our list of the best five Young Guns hockey cards of all time, or take a look at our free Mike Trout RC giveaway!