Ted Williams is one of the best hitters in baseball history. After all, he’s a six-time American League batting champion and two-time AL MVP.

Among Williams’ achievements include:

Member of the Boston Red Sox Hall of Fame

If you want a Ted Williams rookie card which will give you a nice return on your investment, this is it.

The front of the card shows a young Ted Williams in his familiar batting stance.

The back of the card reads, “Ted Williams is one of the youngest players in baseball, has a great future according to experts Ted hits one of the longest and hardest balls in the major leagues today.

Williams was brought up last year from San Diego, and farmed out by the Boston Red Sox, who recalled him this year. In 1937, his first full year with San Diego, Ted drove in 98 runs, 25 of which were home runs.” 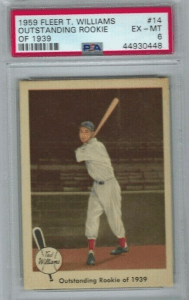 This is a great option for the casual sports card collector. It comes with a 1959 print date, but it highlights Williams’ rookie year in 1939.

The card features the same photo of Williams. However, it is colored with sharp resolution – not bad for a card which came out more than 60 years ago.

The back of the card reads, “The rookie season for Ted Williams was sensational. He hit a terrific .327 and led the league in total bases – a feat never accomplished by an American League rookie before or ever since. He paced the league in runs batted in (145). This is a major league rookie record that still stands. His 31 homers and .609 slugging percentage remain untouched by any rookie in the American League.”

If you’re talking about one of the greatest hitters in the history of baseball, it’s an easy call: invest.

Ted Williams’ name is synonymous with greatness. You can’t pass up on a 19-time All-Star, two-time AL MVP, six-time AL batting champion, and a member of the National Baseball Hall of Fame. His legacy will live in the hearts of baseball fans forever.