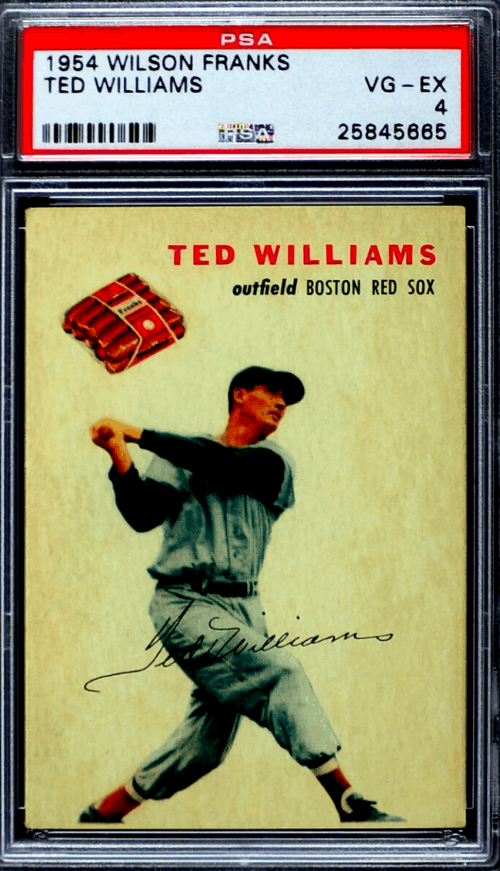 Ted Williams was a former baseball player and manager who played for the Boston Red Sox from 1939 to 1960, taking time off to fight in both WW2 and Korea.

As well as being a two-time war hero, Ted Williams was a 19-time All-Star, a six-time AL batting champion, and a two-time Triple Crown winner. His .482 on-base percentage is the highest of all time, while he has some of the most interesting collectibles on the market.

Here’s everything you need to know about ten top Williams baseball cards, including an investment outlook if you’re interested in owning a copy or two.

Here are 10 of the best Ted Williams baseball cards, taking everything from age, popularity, and price into account. 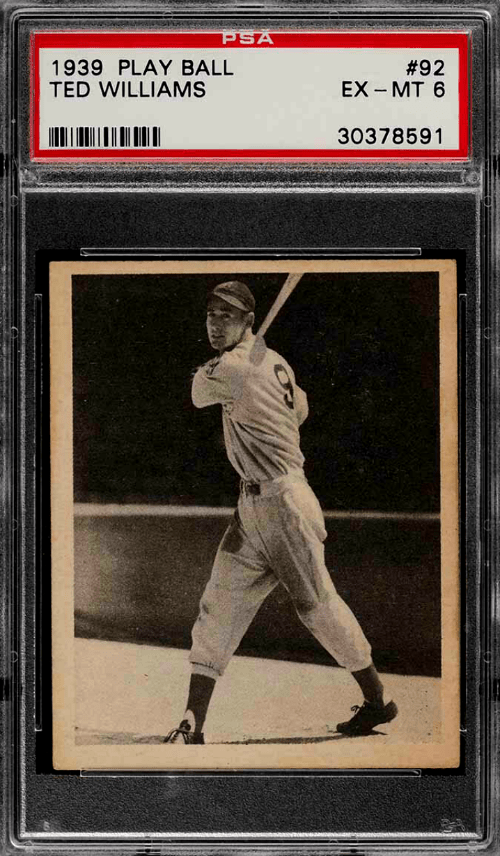 Williams’ ‘39 Play Ball is one of the most valuable baseball cards out there, with mint editions selling for anywhere from $180,000 to $239,000 over the last five years. It features a simple, black-and-white design with an image of the player taking up center stage, holding a bat aloft over his shoulder. You’ll also be able to spot his famous number nine, as he’s turning ever so slightly in the picture to face the camera directly.

Seen as Williams’ RC, relevant info about the player is found on the back, and it has a thick white border on the front. Despite the age, low graded copies are readily available, while mint versions will see prices rise to match the six-figure fees seen above. It’s his top card overall, and it’s the number one pick on our list.

From pre-war to post-war, and what a difference a decade makes! The 1954 Wilson Franks card is a key to the set, while it’s amazing to look at compared to the drab options from the past. The set contains 20 unnumbered colored cards, and they were inserted into packages of Wilson Franks hot dogs, creating a number of condition obstacles. However, a few that never made it to retail have been found in the decades following their release, so it’s not impossible to find mint versions.

It’s a beautiful card, although it’s slightly nullified by having a pack of hot dogs accompanying Williams on the front. In fact, it almost looks like he’s swinging for the meat in the image, as the packet floats above his head awkwardly. It’s still a strong option if you’re looking at Williams cards, especially if you have a preference for something a little different compared to the norm. 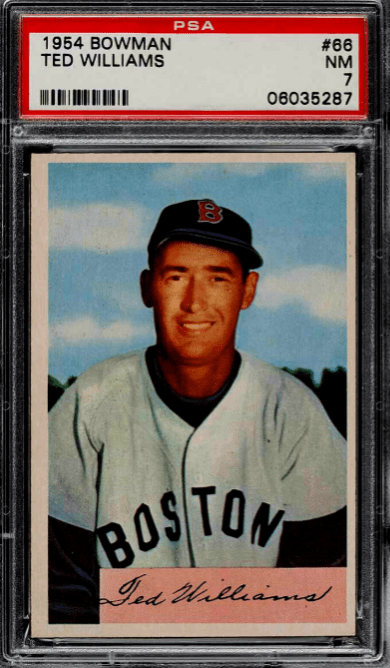 Another rare option from the 1950s, the ‘54 Bowman is another card with a unique story, as it was pulled from production by following a contract dispute between the player and the manufacturer. This means there’s a scarcity in the present day, while it’s prone to various issues such as poor centering and print defects.

The card itself features an image of Williams smiling at the camera, wearing his trusty Red Sox uniform. There’s a blue sky background with a few clouds, and you’ll also find a copy of his signature at the bottom, which is a nice touch. It’s not as valuable as his RC, but it’s still a rare release that is recognized as one of his top cards overall.

(Williams was replaced by Jim Piersall in the ‘54 set.) 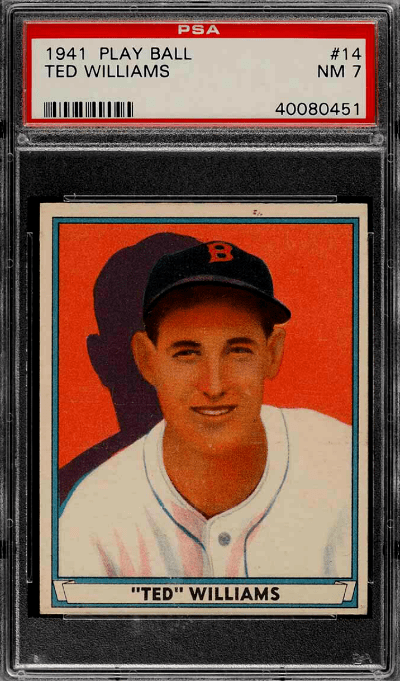 Released a couple of years after his RC, the 1941 Play Ball is a strange one. It’s a popular card, featuring an illustration of Williams, an orange background, a nice blue borderline, and even a name tag at the bottom. However, the illustration is subpar, while there’s a strange shadow that looms over his right shoulder, almost stalking him.

Despite the illustration only vaguely looking like the player, the addition of color and other design improvements have made it a firm favorite for collectors, and that’s reflected in the asking price for mint versions. The coloring can also lead to issues, as many copies look washed out. 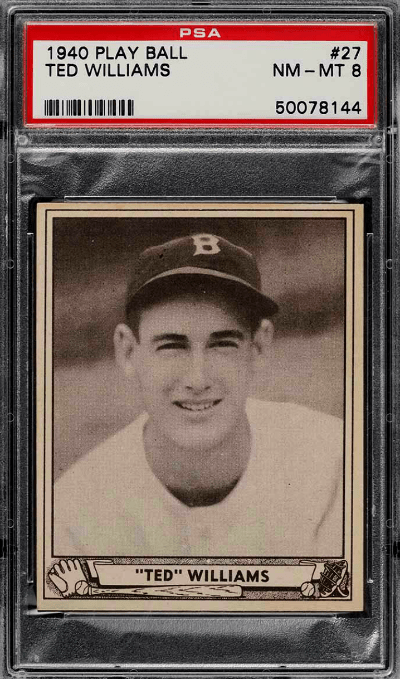 The 1940 Play Ball release qualifies as a pre-war card. (Play Ball is actually a precursor for Bowman, back when they were known as Gum Inc.)

It features a black and white profile shot of Williams smiling down at the camera, wearing a plain white tee and a Red Sox cap. It also has a thin black border. The card itself is fairly unremarkable, but there was a lot of attention paid to the bottom, which lists his name, along with an illustration of a glove, ball, and catcher’s mitt. 80 years old as of 2020, it’s difficult to find mint copies, as the majority have been lost over time. If the prices of the ‘39 Play Ball are putting you off, it’s a great option that is definitely more affordable. 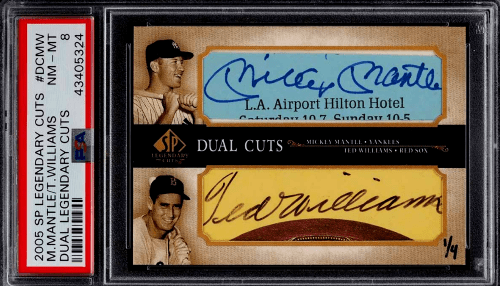 What sets it apart is a duo of certified player autographs, taking up the majority of the space found on the landscape card. Upper Deck sourced the autos from a number of reputable dealers, so each card is different from the next. There are small images of both Mantle and Williams in the bottom left corner, with each veteran holding a bat in a classic pose. SP logos are found in the middle, noting that the card is one of the ‘Dual Cuts’.

There are just four copies altogether. The serial number is filled in black ink and is found on the bottom right corner. 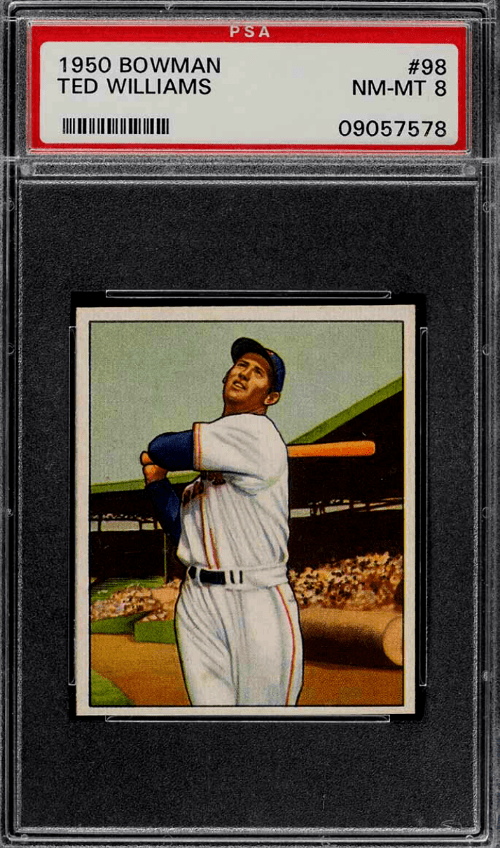 Heading back to his vintage options, the 1950 Bowman was the first card produced by the manufacturer to feature Williams. Again, the illustration doesn’t really capture his likeness, but it’s still one of the better cards in terms of price and popularity. Ironically, there’s lots of detail paid to the stadium background, and it’s still a passable drawing of the Red Sox legend.

In terms of common flaws, there’s often a print line that extends from the roof of the stadium towards his hat. It’s so prevalent that it doesn’t detract from the overall grade. The borderline is also especially thin and susceptible to poor centering. It’s seen as one of the keys to the set, and it’s not especially difficult to find versions that have achieved a high grade. 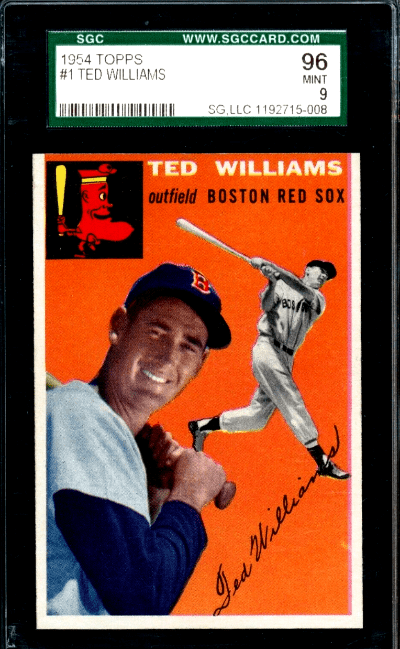 The ‘54 Topps release focused on Williams, as the player was on both the first (#1) and last (#250) cards in the set. (This was the first Topps card to include Williams following his split from Bowman, as discussed above.) Talk about flexing.

The first card (#1) features a large profile shot of the player with a bat slung over his shoulder, as well as a further black and white image after a successful swing. The first thing you’re likely to notice is the deep orange background, while there’s also a signature, a team mascot, and red text for the player name. Given the age, print defects, and centering issues are typical and hold back the majority of copies from achieving a higher grade.

Another card with a unique story, it’s also slightly more valuable than his second release in the set. 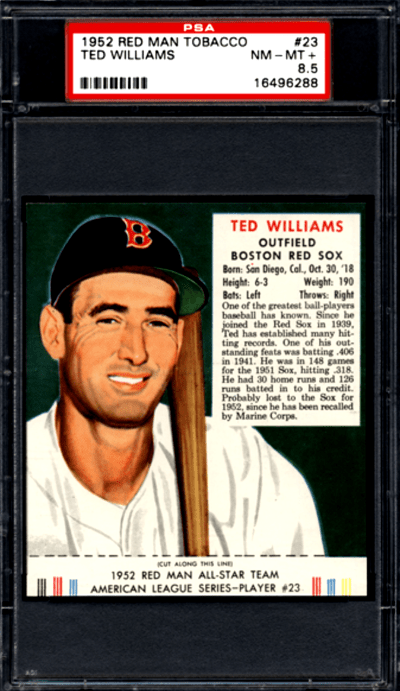 As the first set of tobacco cards produced since the early part of the 20th century, the 1952 Red Man Tobacco collection offers another piece of sporting history. Williams’ card has a unique design, with a great portrait, and a newspaper clipping style section to describe the player. It has a deep green background, while there’s a tab at the bottom, which was originally supposed to be cut out.

There are scissor lines, as they could be cut off and redeemed for a hat. Of course, uncut versions are now more valuable, as it contains important card info such as the card name and number. It’s probably the best looking overall if you’re determined to pick up one of his older cards. 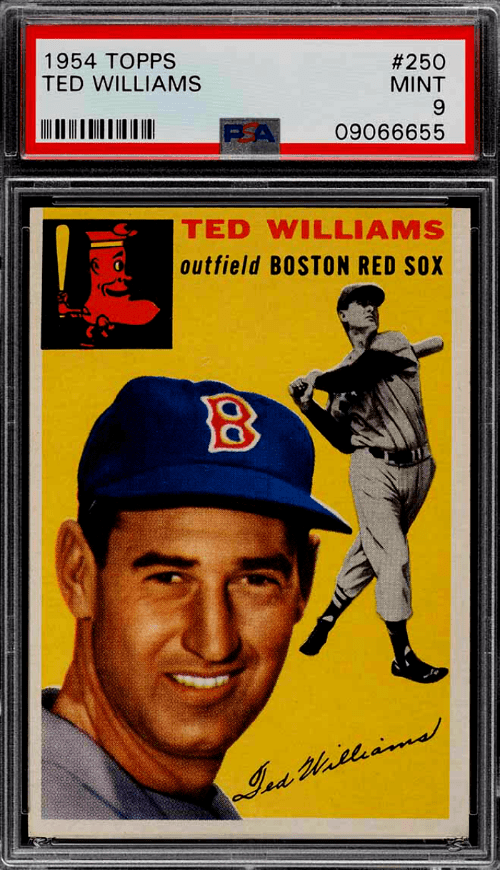 At the other end of the ‘54 Topps set, you’ll find the #250. It’s somewhat similar to the first card in design, with a large profile shot, a further black and white image, and a bright yellow background. Unlike later Topps sets, the four images are different, which is better than the reused assets we’ve come to expect.

The yellow background makes it more susceptible to print defects that may hinder the overall eye-appeal, although it’s slightly more affordable than the first card in the set. It might be the final card on our list, but it’s still a must-have for Williams fans.

Our Card Ownership: None

From pre-war to the mid-noughties, Williams certainly has a unique range of cards to choose from compared to the average player. Unfortunately, he passed away following a cardiac arrest in 2002, although his records are likely to live on for a long while.

With a lifetime batting average of .344 and an incredible on-base percentage of .482, it’s easy to forget that he took time off during his prime to fight in two separate wars. Who knows what he would have achieved if he was equipped with what we now know about nutrition and exercise? We haven’t even mentioned his career as a coach, and he was picked as the “Manager of the Year” in ‘69.

The prices of his best cards have continued to rise in recent decades, fueled by fans who want to own a true piece of history. The pre-war sets are expensive, and his RC has sold for six figures, but there are lots of newer cards that make for an inexpensive entry-level investment piece.

Not just one for Red Sox fans, Williams’ cards is also tempting for any serious baseball card collector. We’ve detailed almost every single one worth knowing about, so you’ll have a better idea of what to look for.

Given current market trends, they appear to be a great long-term investment option, especially when checking out rare vintage editions,