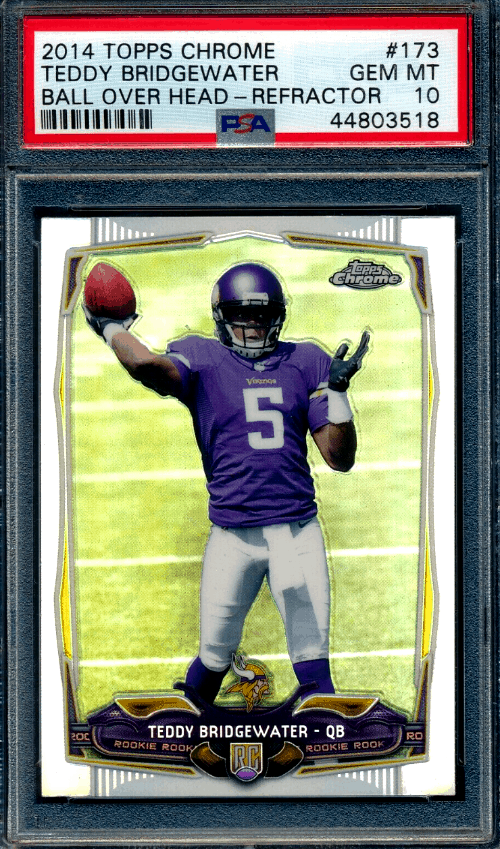 Teddy Bridgewater was drafted by the Minnesota Vikings as a first-round 32nd overall pick in 2014 and it almost immediately started to look like a good pick.

Making the most of a Matt Cassel injury, Bridgewater was given his chance as the Vikings starting QB and seized it with both hands.

Bridgewater kept his starting spot for the 2015 season and made his first Pro Bowl that year. But in 2016 he suffered a serious knee injury which kept him out for almost two full seasons, at the end of which he was released by the Vikings.

He spent 2 years, as the Saints as Drew Brees’ back up at the Saints and did enough in his limited opportunities to be handed the starting role for the Carolina Panthers from 2020 onwards.

In his rookie year, Bridgewater started 12 games and threw for almost 3000 yards and 14 touchdowns whilst achieving a passer rating of 85.2. Bridgewater was named the NFL All-Rookie starting QB and also won the Pepsi Rookie of the Year award. It was quickly evident that Teddy was the real deal.

Always one of the first rookie cards to look out for, the Bridgewater edition features him in full purple Vikings uniform ready to throw the ball, which fills up the vast majority of the card. The 2014 cards also feature a nice-looking border.

Different versions or parallels of this card are accessible to all collectors, with the base card being relatively cheap but the limited run parallels such as the rookie patch autograph can be very expensive. 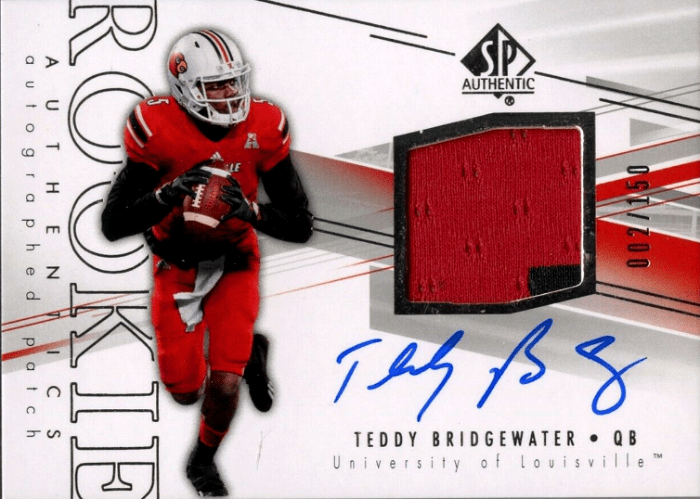 This horizontally printed card is a true beauty, it features Bridgewater on the left with the ball in hand and the game-worn patch on the left, and his autograph below this.

The only downside is that the uniform Bridgewater is wearing, and the patch, are both from his college days and not the Vikings.

The card had a print run of 150 so can get quite expensive, although not ridiculously so, when found in mint condition. 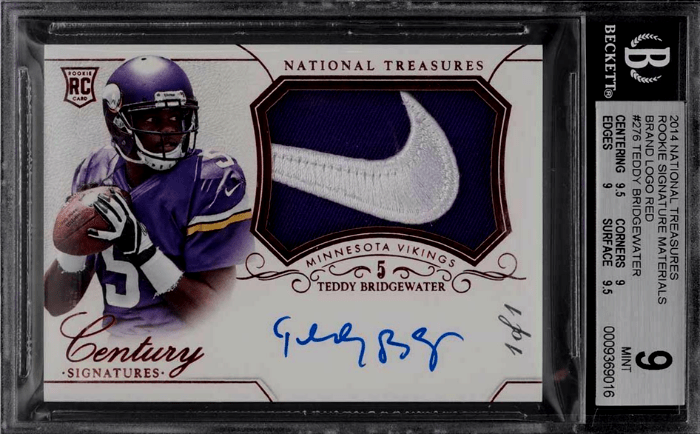 Another very nicely, horizontally designed card this time featuring Bridgewater on the left in Vikings uniform with the ball in hand and the patch on the right just above the on-card signature. The National Treasures detailing is also high-end and #eyecandy.

With a print run of just 99, this card can be hard to get your hands on and holds high value when it comes up in gem mint 10 conditions. 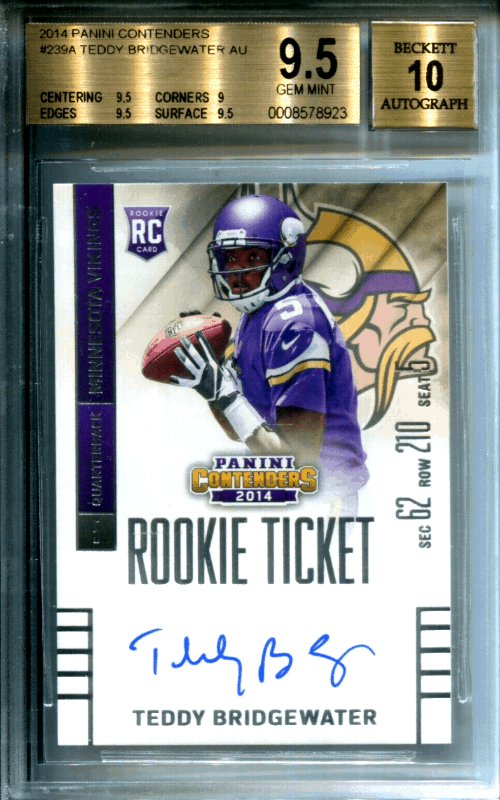 The most expensive Teddy Bridgewater rookie card is his National Treasures RC and Panini Contenders Cracked Ice RC. The most common Bridgewater RC on eBay auctions is his Topps Chrome RC.

If you have a Teddy Bridgewater RC and would like an estimated value please email us at value@goldcardauctions.com.

Teddy Bridgewater has finally managed to put his injury woes behind him and has earned himself a starting role in the NFL again.

The talent is undoubtedly there and if the Panthers can build the right team around him success COULD around be around the corner… but will they succeed is not something were banking on.