The T206 collectible cards are some of the most famous in baseball history. Issued by the American Tobacco Company (ATC) between 1909 and 1911, there are 524 overall, and they’re a great reminder of the pre-war era.

The best T206 baseball cards feature some of the more popular players of the time, and the majority have only increased in value and rarity over the past century.

Given the history, it’s no surprise that you’ll have to spend a solid chunk of cash to get one at auction, with the majority of cards graded below four or below. After all, it’s a 100-year-old card featuring a Hall of Famer, and they don’t come cheap!

Considering the prices, you’ll also have to be wary of buying an ungraded card, as there’s a large market for fakes. Here are some of the best to look out for if you want to add a T206 to your collection, with five of the biggest names in baseball. 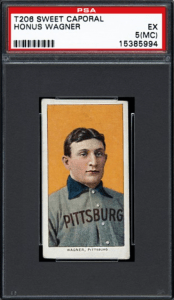 The T206 Honus Wagner card shows the icon in his Pittsburgh Pirates jersey, with a warm orange background. It’s the holy grail of the T206 set, meaning that even a lower-grade card will fetch big bucks at auction. But why is it so expensive compared to others?

It’s rumored that Wagner took an ethical stance against the production of his cards, as it would promote buying cigarettes to children. (It was either that or a fallout with the ATC over how much he was supposed to be paid.)

The ATC ceased production after Wagner spoke out, leaving somewhere between 50 and 200 of his cards in existence. A century on, it’s easy to see why it’s one of the most valuable in the set, and even reprints can go for $40. 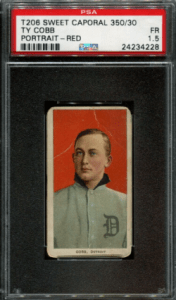 Ty Cobb has a duo of portrait cards that are highly sought after in the T206 set. There are four overall, and the Green Portrait is the rarest, with Bat on Shoulder, Bat off Shoulder, and Red Portrait making up the quartet. The portrait cards are instantly recognizable, with vibrant colors and a strong style.

The action cards aren’t as interesting, but they are a bona fide option if you want to pick up a popular T206 card. In terms of price, a PSA 7 version of the Red Portrait recently sold for over $30,000 at auction, attracting over 70 bids.

Before joining the Philadelphia Athletics, Cobb spent 22 seasons with the Detroit Tigers, including six as the team’s player-manager. He later went on to get 222 out of 226 votes for the Baseball Hall of Fame ballot in 1936, which was unmatched until 1992.

Frank Chance played for the Chicago Cubs and the New York Yankees and managed both teams along with the Boston Red Sox. Chance’s famous yellow and red portrait cards are similar, and he also has an action card with a bat in hand.

His batting version is the rarest, with the Red Portrait in second. (The yellow sometimes looks like orange due to the limitations of the post-war printing process, which can cause prices to fluctuate more than the others.) In terms of pricing, his cards are relatively affordable. A PSA 8 version of his batting card recently went for $3,500, while a PSA 5 version of his Yellow Portrait went for just under $500.

Addie Joss’s “Hands at chest” card sees him looking off into the distance, while he also has a traditional portrait card in the T206 set. A PSA 8-graded version of the latter recently sold for over $6,200 at auction. He pitched for the Cleveland Bronchos for the entirety of his career.

Joss’s portrait card is a strong yellow, and at 6 foot 3, he was a striking character. Sadly, he died of TB at 31, a week after collapsing on the field during an exhibition game in 1911. He was added to the Baseball Hall of Fame in 1977 after a committee waived the ten-year minimum playing career stipulation Joss needed to be eligible.

Widely regarded as the second most popular card in the set, Eddie Plank’s card features a white border and a blue background, similar to the other in-demand portrait cards. There’s no real explanation as to why it’s one of the rarer T206 cards, but it’s estimated that only 75 to 100 exist. (Plank was an anti-tobacco advocate and was never seen smoking.)

The rarity is enough to drive the price up past many others in the set, competing with Wagner’s card for top billing overall. Along with Joe Doyle and Sherry Magie’s Error cards, they make up the T206 quartet known as “The Big Four”.

The T206 tobacco card set was released between 1909 and 1911. Seen as a landmark set in the history of baseball card collecting, they now sell for vast sums over a century later.

Almost every T206 card is precious even at the lowest grades (i.e. PSA 1)

Here’s a rundown with ten of the most valuable cards from the set, including lots of info about the player, their achievements, and how and why their card has made it onto the list.

T206Baseball.com is an excellent resource regarding setting information and checklists. T206 baseball cards have multiple cards of players, including Ty Cobb, Frank Chance, and Christy Mathewson, some showing a ‘portrait’ pose and others with an ‘action’ type image.

There’s no denying that the T206 set is distinctive. The front of all T206 series cards displays a lithograph of the player created by a multistage printing process in which some colors were printed on top of each other. It gives cards from the set an iconic look, a design choice that still holds up today.

In general T206 baseball cards might be the safest investment in the hobby. Even before the sports card market got red hot again, the T206 cards always looked popular, and that will be the case during the next sports card market downturn.

Now don’t expect an ROI as high as a Luka Doncic auto rookie card going into his second season but they won’t flop like Baker Mayfield rookie cards after his first season… they are safe with steady returns… we like them very much! If you don’t already own a couple, consider buying a few the next time you’re making a sports card purchase. Cheers!