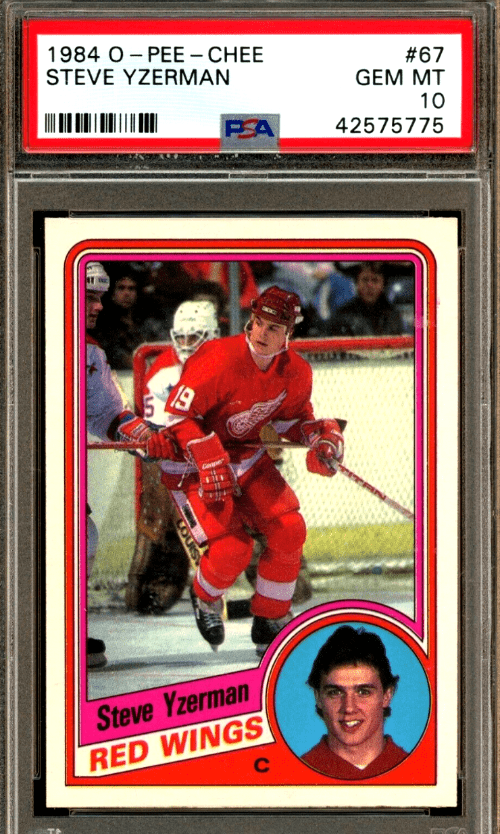 He was their captain from the age of 21, and the affiliation doesn’t end there, as he went on to become the executive vice president, and eventually the general manager of the Red Wings in 2019. The team is ailing, and he’s hoping to lead them to glory again.

Here’s the lowdown on Yzerman’s best rookie cards, including investment advice that looks over the next few years as he enters a new chapter of his career in hockey.

Steve Yzerman has just three rookie cards that are found in the 1984-85 O-Pee-Chee and 1984-85 Topps Hockey sets. We’ll start with the most expensive option out of the trio.

Let’s begin with the 1984-85 O-Pee-Chee. The contrast of a red and pink color scheme works well with Yzerman’s Red Wings uniform, while there’s a strong action shot of the player on the ice, along with a second profile image located in a circle at the bottom.

There’s space for the player and team name on the front, while it has a bilingual back featuring French and English text, as was customary for OPC cards at the time. It’s undoubtedly the most valuable card in the 1984-85 O-Pee-Chee set, which also featured fellow Hall of Famers Doug Gilmour, Chris Chelios, Cam Neely, and Pat Lafontaine. 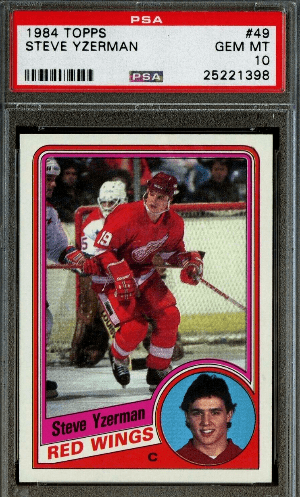 The Topps card is a US version of the Canadian card listed above, with no real differences in terms of the overall design on the front. It has the same red and pink color scheme, along with the same images, and the same Hall of Famers.

Therefore, you’ll be able to tell the difference between the two by checking out the reverse, which is 100% English. It’s also cheaper than the OPC, possibly because of the lower print runs due to a smaller Canadian market at the time. 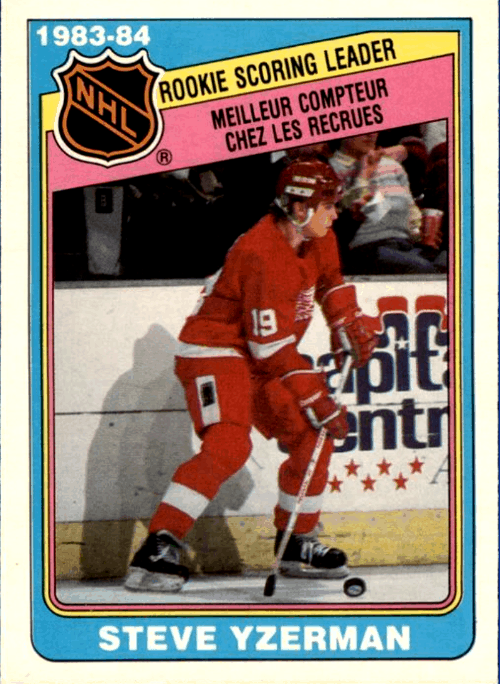 Part of a release that honors the NHL’s rookie scoring leaders, the 1984 O-Pee-Chee Set Break is the third and final card on the list. It’s still technically a Yzerman RC, although it’s the least popular of the trio when it comes up at auction.

There’s a slightly grainy action shot of Yzerman on the ice, along with an NHL logo, and a note (in English) to say that he was the 1983-84 rookie scoring leader. As an OPC card, it also says “meilleur compteur chez les recrues”, which roughly translates to “best scorer among recruits” in French.

However, it’s the least expensive of the trio on the list by a decent amount, which isn’t great news if you’re looking for the best investment options.

‘The Captain’ is a true legend of the game, and his rookie cards are a worthy addition to any serious hockey collection. They could also be a good mid-term investment, but a lot depends on how he deals with the pressures that come with being GM at the team that made him famous.

The Red Wings had the worst regular-season record ahead of the 2020 Stanley Cup qualifiers, although that didn’t help them in the draft lottery as they ended up with the fourth pick overall. The addition of a starting goalie seems necessary, while a change in fortunes on the ice would only cement Yzerman’s legacy with the fans.

However, the odds are currently stacked against him, despite his obvious talents as a GM. The Red Wings have missed the playoffs in the last three seasons, so the longest-serving captain in NHL history has a big job on his hands if he is to right the ship.

In terms of investment pieces, his RCs probably aren’t the best options, although PSA 10 versions of the first OPC card (#67) will sell for four figures depending on the buyer. (This also makes it one of the more expensive hockey cards from the era.)

As is the case with many ‘80s hockey cards, prices begin to drop off immediately when looking at PSA 9s and below, so they’re not the best investment unless you’re looking at gem mint copies.

We’d look to more modern Yzerman cards, particularly autographed and game-used patch editions, especially if you’d prefer to invest in true high-end options. For example, his 1996-97 Upper Deck Game Jerseys is one of the better cards you’ll find, while it still has a vintage feel.