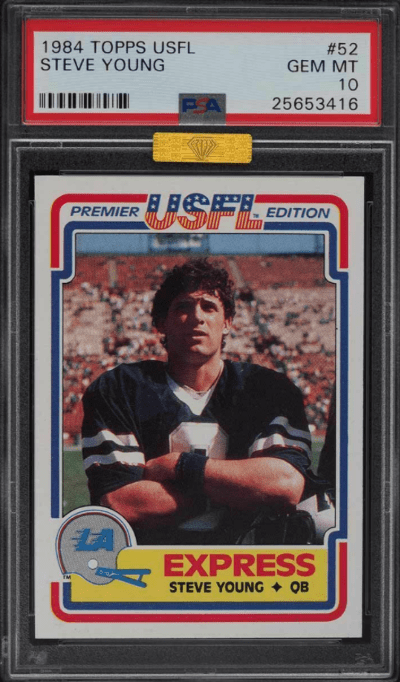 Steve Young is a former quarterback who spent 15 seasons in the NFL, winning almost everything in a storied career.

After a couple of years with the Los Angeles Express and the Tampa Bay Buccaneers in the defunct United States Football League, he joined the San Francisco 49ers in 1987. The rest is history.

He’s a three-time Super Bowl champion, with seven Pro Bowl appearances to his name. Here’s everything you need to know about Young’s very best rookie cards, including a checklist and investment advice for the future.

We’ve put together a trio of the most popular Steve Young rookie cards based on recent auction data. 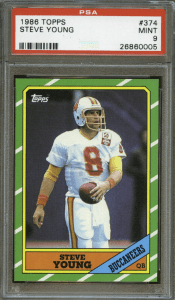 The 1986 Topps has a green and white striped border, and it’s considered to be his first ‘true’ rookie card. This is because it’s Young’s original NFL option, rather than USFL like the others on this list.

As for value, a BGS 9 sold for just over $150, so that should give you a better idea of what it’s worth to collectors. The quote on the back reads;

“Steve threw Buccaneers’ longest completion of the 1985 season, a 59-yarder to Kevin House, December 15th. He guided Brigham Young to 11-1 record and Holiday Bowl win in 1983.” 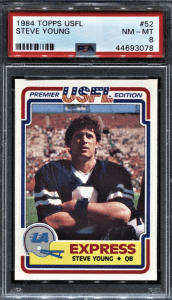 From his time in the ill-fated USFL, the 1984 Topps is still worth a decent chunk of change. A PSA 10 grade recently sold for $5,200, attracting 66 bids at auction. It’s the most expensive sale in recent months, while a PSA 8 still went for $274. It features a profile image of Young, staring at the camera with his arms crossed. The reverse notes; 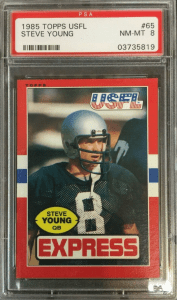 The final card on our list is the 1985 Topps. Another USFL option, this card has a red border, with white and blue to match the USA’s flag.

A PSA 10 recently went for $222.50, which is a significant difference in price compared to his 1984 card. The back has a simple design, with blue text on a white background. The quote on the reverse reads; 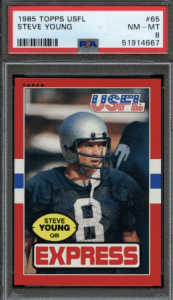 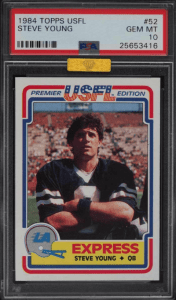 If you are looking for an estimated value of a Steve Young football card please email us at value@goldcardauctions.com.

The legendary 49ers quarterback actually started with an awful 3-16 record over his first two seasons in the NFL but went on to create his own legacy with the franchise in the years that followed.

His rookie cards are hot property for 49ers fans, as well as collectors interested in the era or his numerous records from QB.

In later years, the Hall of Famer retired due to concussions, despite being offered a job as the starting quarterback of the Denver Broncos in 1999.

More recently, Young has advocated for everything from a better understanding of brain injuries, to supporting LGBTQ students at Brigham Young University.

He doesn’t seem like the type to cause controversy that will lead to a drop in his average rookie card prices, so it does look to be a safe investment.

The 1984 Topps is his most popular rookie card by far, and it’s reflected in the average price, as well as the overall condition.

PSA 8s and above could be a decent venture if you’re willing to sit on them for a while, and the others are great if you have a slightly lower budget to work with.