Steve McNair was drafted as the 3rd overall pick in the 1995 draft by the then Houston Oilers (now Tennessee Titans), and spent most of his career with the franchise before moving on to the Baltimore Ravens for 2 seasons to finish off his career.

💰💰Top Investments You Need To Make💰💰

During his decade with the Ravens, he appeared in 3 Pro Bowls and won the 2003 NFL MVP whilst leading them to the Super Bowl, which they would eventually lose 23-16.

McNair spent most of his rookie year as a backup to Chris Chandler, and for most of the season was limited to a handful of 4th quarter garbage time appearances.

It remained this way all the up to his 3rd season as a pro when he was finally named the starter.

There are 32 official rookie cards, we have picked out 3 of the very best. 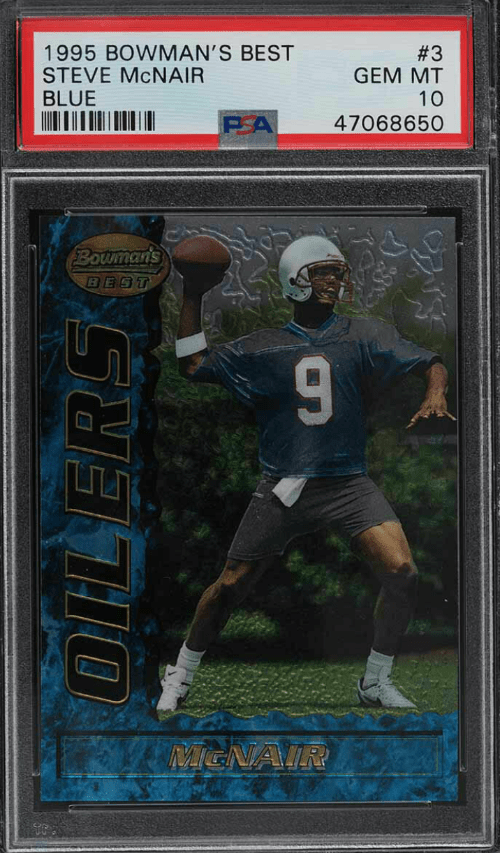 A must for any collector of Steve McNair cards is the 1995 Bowman’s Best set from his rookie season. They feature him as the main attraction in Oilers uniform throwing the ball, on what looks like is the training ground.

The word Oilers is written in big letters on the left, which is good for the nostalgists amongst us.

As always with Bowman’s, there is a lot of parallels and inserts that make it a great set for all collectors.

The base card can be picked up for dimes, whilst the rarer parallels that sometimes number under 100 go for big money. 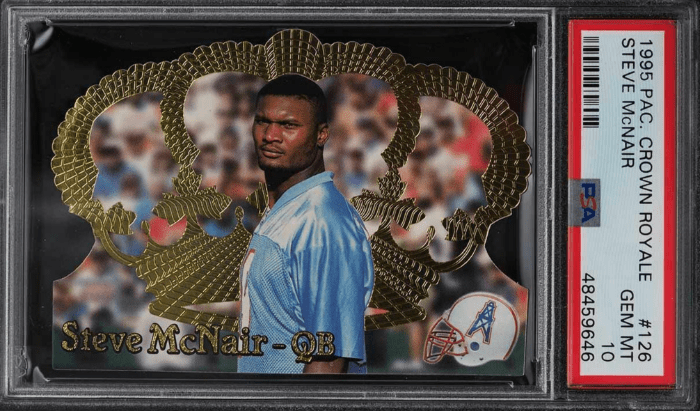 Crown Royale usually brings the heat when producing a football set, and the 1995 Crown Royale Football Set is not off the mark.

It features McNair with an icy-cold glare that would make the toughest of football players whizz in their pants on game day.

With a somewhat low print run and tough grading when this comes up in perfect condition it will cost you a fair bit more than the average McNair rookie card (buy worth it over the long run for McNair FANBOYS). 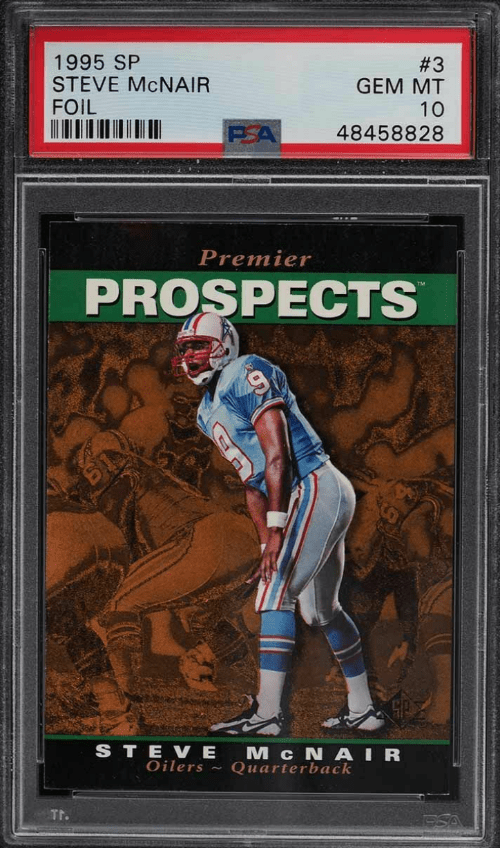 This is one of those cards that value is massively boosted by its great-looking design.

It features McNair in a blue uniform looking like he is about to receive a snap, overlayed on top of a faded brown colored offensive line.

The back and green header and footers that contain the branding, name, position, and team also look great.

Considering it is unsigned and unnumbered, the card can cost quite a lot when it comes up in top condition, but that is almost worth it for the look of it alone.

McNair is one of those players who has always had rookie cards that are very underrated in terms of value and do not reflect the career he had.

His tragic death in 2009 righted this wrong slightly, giving his cards a big valuation boost but are still a long way behind others in the same class as him.

They have held this extra value but have not increased further.

It is unlikely they will increase in value again, but they should hold value well, but holding value is not what were really looking for… pass.