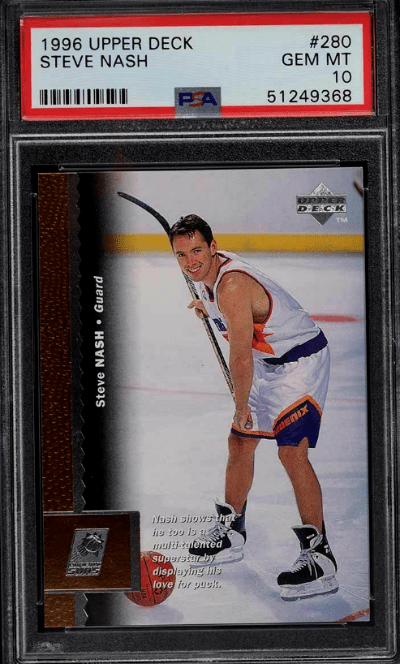 Steve Nash (02/07/74) is a decorated retired point guard who is the current head coach of the Brooklyn Nets.

An eight-time All-Star and a seven-time All-NBA selection, the Hall of Famer were a two-time NBA Most Valuable Player while playing for the Phoenix Suns.

We’re taking the time to look at three of the best Steve Nash rookie cards, along with advice if you’re looking at long-term investments.

Nash’s RCs hail from 1996, so there’s a number of solid options to choose from. Another bonus is that they show the point guard in his Suns uniform since he is best known for two stints with the franchise. 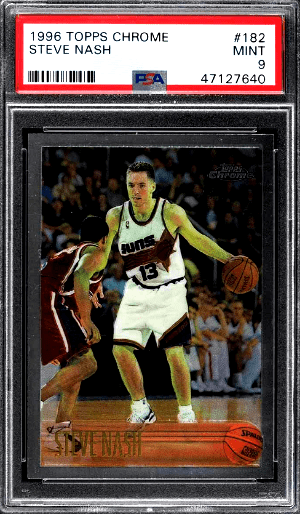 The undisputed king of Nash collectibles has to be his 1996-97 Topps Chrome RC. The action shot takes up the majority of the focus, as he dribbles along with the court with a ball in one hand.

It features a simple chrome finish, with no hard border and a tiny Topps logo found in the top left corner. His name is displayed in gold chrome at the bottom, and Nash is wearing his white Sun jersey.

Keep an eye out for Refractor versions, which command a high fee when looking at pristine copies. 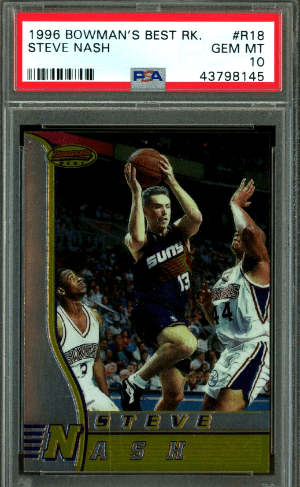 Next up is the 1996 Bowman’s Best RC. A colorful card shows its age a little more than the card seen above. There’s a vintage Bowman logo in the top corner, while the action shot of Nash also sees Allen Iverson in the background.

Refractor parallels always do well at auction, while the same is true for the very limited Atomic Refractor. It’s not as popular as the Topps Chrome card, but it’s another worthy RC if you’re looking at PSA 10 copies. 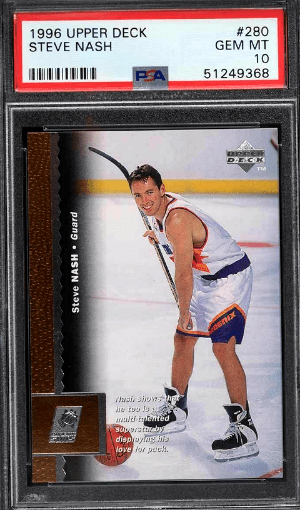 The Steve Nash Upper Deck rookie card is not only one of the more popular of his rookie cards, but it’s also super affordable even at high grades.

Numbered #280, the UD RC features Nash taking a slapstick with a hockey stick but with a twist as a basketball is being used instead of the traditional NHL hockey puck. A cool-looking card with a nice-looking price tag. 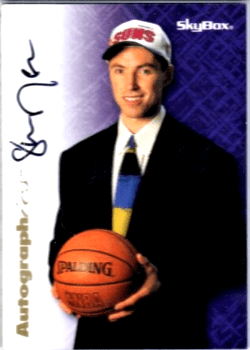 The final Nash RC contains an on-card auto that helps it to stand out from the crowd. Another product of its time, the Skybox Premium Autographics card features the player in a stiff pose and a bad suit.

The auto is found in the top left corner, placed vertically rather than horizontally. While most are signed in black, the rare blue ink card is supposedly limited to only 100 copies. It’s one of his more interesting cards and is the most affordable RC to make the list. 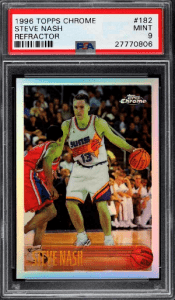 Looking for an estimated value of your Steve Nash rookie cards?

DM us on the Gold Card Auctions Facebook Page or email value@goldcardauctions.com.

On the brink of buying a Steve Nash basketball card but want last-minute advice? 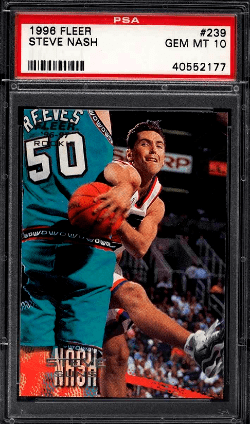 Nash has a variety of interesting rookie cards, although you might be better placed looking elsewhere for the most valuable options.

Take his 1997-98 Metal Universe Precious Metal Gems (#101) card, numbered to just 100 copies. The PMG set is one of the most iconic in the hobby, and it has to be seen as the best Nash card overall.

However, his RCs are picking up steam, and they’re showing sustained interest from collectors in the present.

25 years on from the release of his rookie cards, prices have risen dramatically. A PSA 10 copy of his Topps Chrome RC could be had for under $200 as late as 2018, while the same grade now can now sell for 20 times that amount.

Nash is a true legend and a Hall of Famer, who still has a chance to have an impact on the sport. He was named Eastern Conference Coach of the Month for February 2021, becoming the first Nets head coach to do so since 2014. Another successful run would only make his cards more attractive from an investment perspective.

How much is my Kobe Bryant rookie card worth?

A Kobe Bryant rookie card can be worth a few thousand or a few hundred thousand. Email us at value@goldcardauctions.com for an estimated value of your Kobe rookie card.

What is the most expensive Michael Jordan rookie card?

How much is a Kevin Garnett rookie card worth?