While Washington Nationals starting pitcher Stephen Strasburg is no rookie, investing in some of his top rookie cards should give you some very impressive returns in the future.

Strasburg was born on July 20, 1988, in San Diego, CA. He has a five-pitch arsenal which includes a nasty four-seam fastball and a hybrid “slider-cutter pitch.”

The highlight of Strasburg’s career was winning the 2019 World Series MVP Award.

He went 2-0 when he took the mound against the Houston Astros, helping the Nationals win their first-ever World Series pennant.

Let’s check out some of Strasburg’s top rookie cards.

Stephen Strasburg is one of the big-name starting pitchers today. 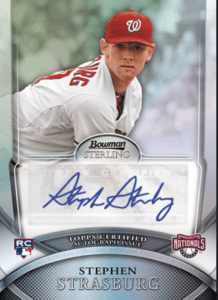 The front of the card shows Strasburg throwing one of his patented fastballs.

His autograph is right below the photo.

The back of the card reads, “One start – two more artifacts for the Baseball Hall of Fame.

After Strasburg’s momentous (and victorious) Major League debut against Pittsburgh on June 2, 2010, the Washington Nationals sent his hat and a ball to Cooperstown.

He walked zero that day to go with his 14 strikeouts – something even Nolan Ryan did only once in the 773 starts of his career.”

A top-notch card that features Strasburg’s autograph and record-setting MLB debut is a must for any investor.

It’s a must for any hardcore baseball card collector.

This sealed card features an image of Strasburg on the mount, his autograph, and a colored patch from his Washington Nationals jersey with blue and white graphics in the background.

The simple yet stylish silver borders make for a nice finishing touch. Everything adds up to a great win-win scenario.

When supply is low, demand is high.

Add this card to your collection and reap the financial dividends later.

Without a doubt, this one is the mother of all Stephen Strasburg rookie cards.

The front of the card shows Strasburg’s image, his autograph, and game-worn Washington Nationals white patch.

The green panel at the bottom reads “FINEST MOMENTS.”

The caption below says, “Stephen Strasburg fans 14 Pirates in MLB debut, 6/8/10.” The back of the card narrates his historic MLB debut against Pittsburgh in 2010.

When you first lay your eyes on this one, you’ll get the impression it’s Fort Knox gold bar material (here’s a hint: this card will cost you at least a month’s salary).

On that note, this Stephen Strasburg rookie card is best suited for collectors who can pay top dollar.

Whoever buys it should get a hefty return several years from now.

This is one card that will make you feel you’re a part of MLB history.

In fact, doing so can improve your investment portfolio drastically.

Our reason: barring any unforeseen injury, we don’t see the 31-year-old Strasburg slowing down.

He’s one of the reasons why the Washington Nationals are a force to be reckoned with.