Stephen “Steph” Curry (03/14/88) is a point guard and eight-time NBA All-Star who began his career with the Golden State Warriors in 2009. He was the seventh pick in the draft and soon went on to revolutionize the league with his shooting ability.

Steph’s three-shot skills make him a danger across the court, and he caused teams to adapt by using smaller, more mobile players to track his runs. Otherwise, he’ll destroy a team in a single-minded fashion, and there’s never been another like him in the NBA.

He recently passed Reggie Miller and Ray Allen in three-pointers made, making him the all-time leader with 3117 after the 2021-22 NBA season.

Curry is one of the current faces of the NBA along with LeBron James, making his rookie cards some of the most popular available. We’ve prepared a checklist with all of his 2009 rookie options, as well as going into detail about three of the best below.

Curry’s cards can go for big bucks, and they’re certainly worth more than the average RC from the late 2000s. Here are three of the very best you’ll be able to find at auction.

This is our favorite Curry rookie card for investment purposes.

The Topps Chrome edition is numbered #101, while the quote on the back says;

“A superb shooter like his father, longtime NBA marksman Dell Curry, Stephen knocked down 414 3-pointers to become Davidson’s all-time career scorer in three seasons. However, it was another aspect of his game that stood out to Bobcats coach Larry Brown in a pre-draft workout. “The thing that most impressed me is that he passes the ball,” said Brown. “He’s a great passer. He knows how to play”.”

A simple card when all things are considered, it features a large portrait image of a startlingly young-looking Curry. There’s no signature, but there is a rookie card logo located on the top-right edge.

As with many Topps Chrome cards, there’s a refractor version which causes prices to increase drastically. For example, a couple of base PSA 10’s recently sold for $2,800 and $3,351 apiece. A gem mint refractor card went for $13,433, so it’s a significant jump if you’re aiming to pick up the very best version available.

It’s numbered up to 999 so it’s not the rarest, but it’s always popular with collectors and will be for years and years to come. 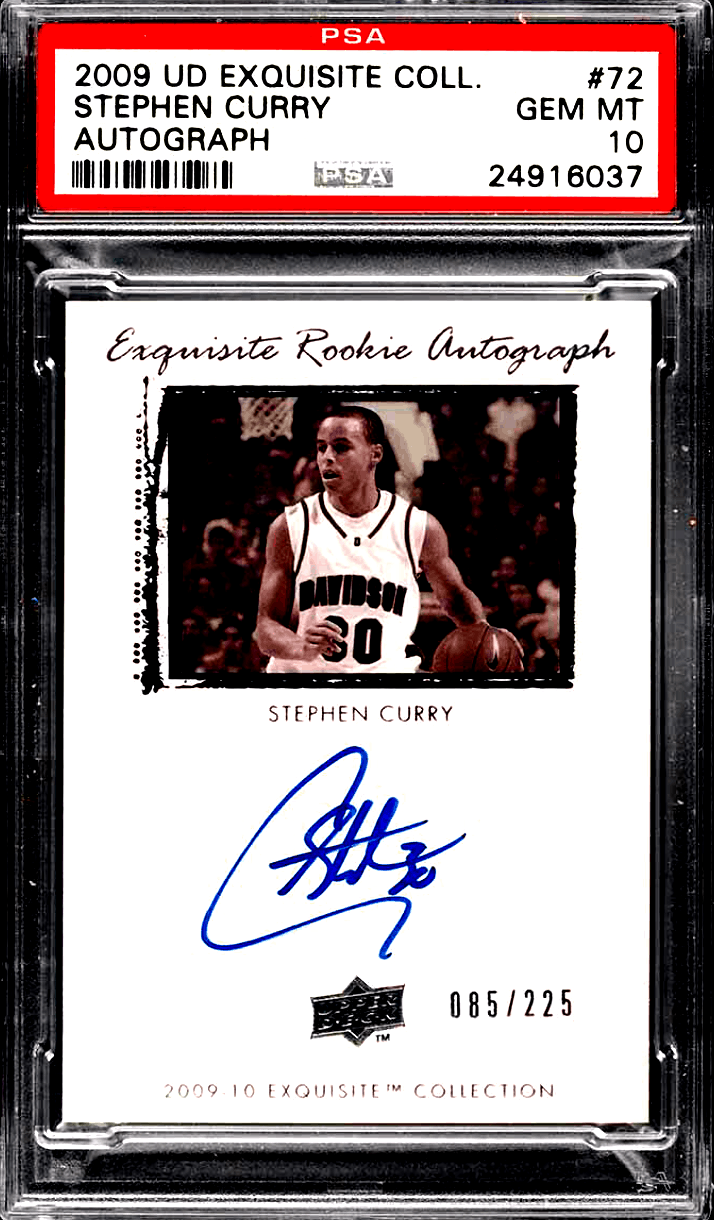 This dynamic card features Curry mid-dribble, with the ball in hand and a crisp black and white portrait layout. There’s a massive autograph across the bottom, with large writing on the top confirming it’s an “Exquisite Rookie Autograph”.

The back has a monochrome version of the image on the front, although there’s no quote other than confirming the legitimacy of the autograph.

It’s fair to say that it’s expensive, but that’s likely due to the on-card signature and the popularity of the player. 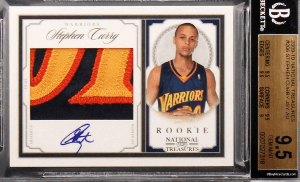 Good luck getting your oven-mitts on this bad mamma JAMA.

The price blows the others out of the water for a couple of reasons. It’s only numbered to 5 making it the rarest option by far, while there are a large player patch and an autograph located on the front. He’s also featured in his Warriors shirt rather than his Davidson jersey, making it even more desirable for the average collector.

The reverse of the card reads;

The highest of the high-end, you could get a mortgage in almost any city in the world for the price of the 9.5 version, while a 10 is also incredibly expensive. On the other hand, you won’t find it better if you want the rarest Curry RC card that money can buy.

Curry has an extensive list of rookie cards, with a total of 28 recognized as official options. (2009 was the last year that saw official rookie cards from multiple manufacturers after the NBA Draft.)

Here’s a rundown in alphabetical order; 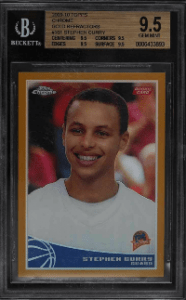 Please email us at value@goldcardauctions along with a picture of the card and we will ATTEMPT to provide you a value of your card based on past sales.

Email advice@goldcardauctions.com if you would like advice in regards to purchasing a Steph Curry rookie card.

Not a Curry fan? Check out these great NBA rookie card investments…

Curry has proven himself to be one of the best players of his generation and has the rings to prove it.

When most people look at cards as investment options, they look for the player’s accolades. That makes sense for most players, and it works for Steph Curry too. After all, he has had a tremendous career.

On top of being the all-time leader in three-pointers made, Steph is a two-time MVP, three-time NBA Champion, eight-time all-star, and has made the All-NBA First Team four times.

Before he entered the league, no one was taking three-point shots at the value Steph is, or from the range he took them. Defensive strategy is completely different now than it was 15 years ago, and that’s because of Steph Curry.

Without Steph Curry, we would not have stars like Damian Lillard, Trae Young, or Luka Doncic doing the things they do.

When Was Stephen Curry a Rookie?

Steph was drafted 7th overall by the Golden State Warriors in 2009. He went on to play the entire 2009-10 season with the Warriors.

What Accolades Did Steph Curry Receive As a Rookie?

As a rookie, Steph put up splits of 17. 5 points, 4.5 rebounds, and 5.9 assists. Those numbers earned him a place on the NBA All-Rookie First Team. However, he finished second in Rookie of the Year voting behind Tyreke Evans of the Sacramento Kings.

Where Does Stephen Curry Rank as an All-Time Great Player?

Most people have Steph Curry close to the top 10 all-time. Some have him just outside the top 10, whereas others have him as high as seven or eight.