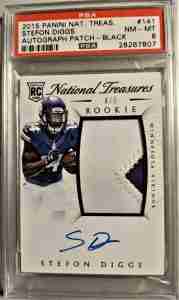 The NFL is filled with fantastic wide receivers, but very few of them are as good as Stefon Diggs. Over the past few years, Diggs has emerged as one of the premier wide receivers in the NFL.

Although he is a star right now, not much was expected of Diggs when he entered the NFL. Diggs spent three years at the University of Maryland before declaring himself for the NFL Draft.

When the draft came around, Diggs fell all the way to the 5th round where he was eventually picked by the Minnesota Vikings. He spent five years with the Vikings before a trade sent him to the Buffalo Bills.

Diggs really emerged as a star in the NFL in his first season in Buffalo in 2020. That year he was the NFL receptions and receiving yards leader. As a result, he was named to the All-Pro First-Team.

Although his second year in Buffalo was not as historic as the first, he still made the Pro Bowl.

As one of the best and most popular wide receivers in the world, many collectors are interested in his rookie cards.

Since Stefon Diggs is one of the best wide receivers in the NFL, it should be no surprise to hear that his rookie cards are a desired commodity. However, it can be difficult to determine which of his cards is best.

Fortunately, we are here to help you out by looking at his three best rookie cards.

National Treasures is one of the premier trading card companies in the world, and as a result, it should be no surprise to hear that they have one of the best Stefon Diggs rookie cards.

This card has a white background with Diggs on the left side. In the image, Diggs is wearing his purple Vikings uniform and he is running the ball upfield.

The right side of the card features a patch that is oriented slightly differently in every copy of this card. At the bottom of the card, it says his name, and there is a place for an autograph.

The back of the card has a blurb that showcases Diggs’ personality and outlook on the game. 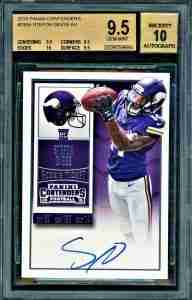 The Panini Contenders set is one that generates a lot of excitement every year. In 2015, not many people expected Stefon Diggs to be a standout, but that’s what happened.

This card features a picture of Diggs catching the ball on the right side. The left side has his rookie ticket. There is then a section on the bottom for his autograph.

The back of the card uses the same image of Diggs. Additionally, it includes his height, weight, birthdate, draft position, and a scouting report. 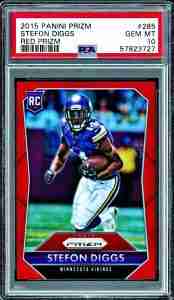 The final card we want to look at is from the Panini Prizm collection. This card has a red border with an image of Diggs carrying the ball in the middle. In the image, Diggs is wearing his purple Vikings uniform.

The bottom of the card reads “Panini Prizm, Stefon Diggs, Minnesota Vikings” from top to bottom. You can see the rookie card logo in the top left corner.

Finally, the back of the card is fairly standard. It shows Diggs’ position, a blurb about Diggs, college stats, weight, height, and birthday.

The National Treasures card is by far the most valuable card of the bunch. With an autograph and in mint condition, it can sell for several thousands of dollars.

If you have a Stefon Diggs rookie card that you want to get the estimated value for, email us or comment below. Please include two photos of the card in your inquiry.

The best time to invest in rookie cards is when the players are still young. At that time they haven’t done anything in their career, and as a result, the value of their cards haven’t skyrocketed.

Unfortunately, it is unlikely that Diggs will have a better peak in his career than the 2020 season. Even if his prime continues for a few more years, the value of his cards probably will not increase by much.

So, these cards are valuable commodities for people that already own them, but investing in them now is not a great idea. If you turn a profit, it won’t be for much, and you are more likely to break even or lose money.

What Is the Best Stefon Diggs Rookie Card

The card from the 2015 Panini National Treasures collection is the most valuable Stefon Diggs rookie card.

When Was Stefon Diggs a Rookie?

Stefon Diggs was a rookie in the 2015 season after getting drafted in the 5th round of the draft.

What Team Did Stefon Diggs Play for as a Rookie?

Diggs played for the Minnesota Vikings in his rookie season.