When it comes to collectibles, few franchises can match up with Star Wars.

A massive cultural phenomenon throughout the late ‘70s and beyond, the latest trilogy of films concluded late in 2019.

From games to toys, cards, and everything in between, there’s a massive market for Star Wars merch, and scarcity tends to tie into overall values.

With that in mind, we’ve come up with a list containing 7 of the top Star Wars cards of all time, with info about how much they’re worth, and how they managed to make it onto the list in the first place.

Between 1977 and 1978, Topps released five different series of Star Wars cards, each building off the last.

Of course, they’re not of the best overall quality, and that’s especially true when held up to modern editions. (Think poor centering, blurry images, and no autos.) 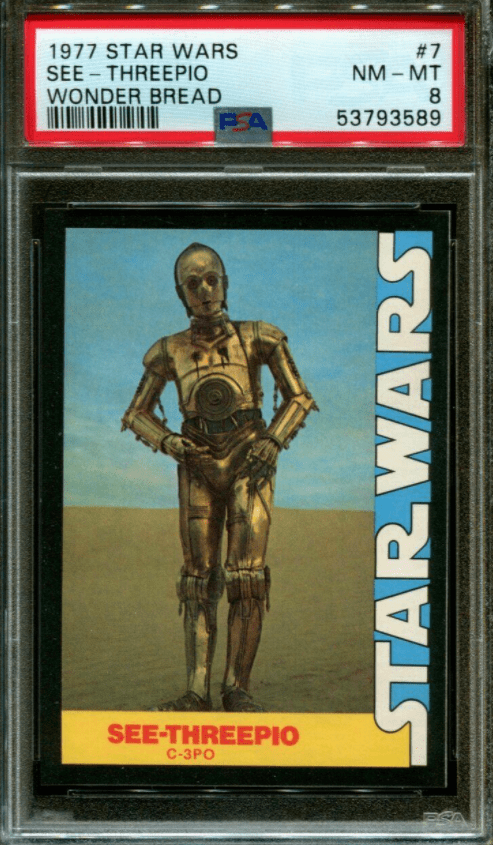 The 2007 Topps Star Wars 30th Anniversary set was arguably the pinnacle at the time, until the 2015 SW-themed release which continued to build on the expanded universe.

As always, we’d look to graded options when possible. For older cards, PSA is likely to be the preferred service, while BGS will probably handle the auto cards released in later years.

The majority of options to make the list will sell for at least four figures when looking at mint copies.

For the purposes of this list, we’re sticking with the highest grades possible.

First up on the list is the original R2-D2 card from 1977. It features an image of the little robot, against a stone backdrop.

There’s a classic SW logo at the bottom, while the border is also interesting. Blue and white, it features tiny planets and stars dotted across the sides.

We love the long-term value of the 1977 Artoo-Detoo Topps Star Wars The Little Droid R2-D2 #3… if anyone has a PSA 10 or BGS 10 email info@goldcardauctions.com

The card has a plain reverse, which is slightly disappointing, but the same is true for most cards from the set.

In terms of value, a PSA 10 grade will sell for a comparable price to one of the latest Harrison Ford autos, so it shouldn’t be discounted.

The same is true for most gem mint options from the set, but you can pick up the entire collection for a low fee if you’re not worried about the condition.

He’s joined on the list by his erstwhile companion C-3PO, in one of the best cards I’ve ever seen.

The 1977 Topps C-3PO card was released in error, as he’s sporting large goldenrod, and that’s not even a euphemism!

The cards were hastily recalled, but not before they made their way onto the collectible market. Otherwise, it has a thick, green border.

It might not be as valuable as you might have expected, but it’ll still take a significant chunk of change to add a copy of the error card to your personal collection.

Sticking with 1977, we’re looking at the Luke Skywalker card from the set, which is always going to be a favorite with fans.

It sports a profile image of the actor dressed as the character, with a pale blue/grey background. It has a deep green border, and there’s a red Star Wars logo found at the bottom.

The colored corners make it incredibly condition-sensitive, which is the case for the majority of cards from the 1977 release.

As with the others, a gem mint copy will sell for four figures.

Fast forward to 2015, and signed cards are now the name of the game.

There’s no better than the reclusive Mark Hamill, who returned to play the role of Luke Skywalker in the latest trilogy.

The films may not have been received well, but the same can’t be said for his signed cards.

Unlike the other signed cards from the set, Hamill’s card is only available in parallel versions, which can be found below.

The one-of-one is exceptionally expensive, while even the Prism is fairly expensive.

The image is a close-up of Skywalker being trained by Yoda, who sits on his shoulder. It has a chromium background, and the auto is found on a plain section at the bottom. 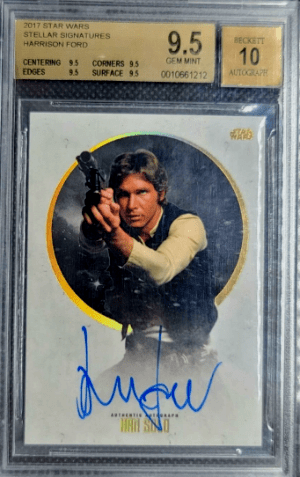 Harrison Ford is known for his distaste of the Star Wars films, but he’s always good for a signed auto if he’s being paid well enough.

Han Solo is a popular character, so he’s signed options easily exceed four figures when they come up at auction.

This is a classic card, featuring a circled image of Solo with his trademark blaster in hand.

It comes with gold trim, and it has a plain white background that is faded at the base. This gives way for great on-card auto, completing the look.

The base version is numbered to just 40 copies, while there are lots of rare parallels on offer.

Carasynthia “Cara” Dune is a character from the hit TV series; The Mandalorian.

Her autographed card from the 2019 Topps Now Star Wars collection is one of the more popular modern options, released as one of three signed cards from the set.

It features a shot from the show, with Gina Carano in character.

In fact, the card notes that it’s from S01:E7 specifically.

There’s a serial number at the bottom found next to the Star Wars logo, while her auto is filled in blue ink across the bottom half of the card.

Carano has been exceptionally generous, with one of the larger signatures you’ll find on a collectible. 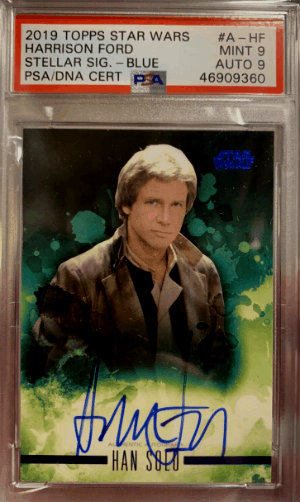 Ford is back in the 2019 Topps Star Wars Stellar Signatures set, which features autos from most of the major stars seen on the silver screen.

Of course, there’s no end of fans who are willing to purchase a rare signed Han Solo card, so it’s one of the more popular and valuable options.

It has a classic profile shot of Ford as Solo, with a chrome Star Wars logo found in the top left corner. As with the 2017 card, you’ll find a range of similar parallels.

If you are looking to buy Stars Wars Trading cards and want advice please email us at advice@goldcardauctions.com or Gold Card Auctions on Facebook. 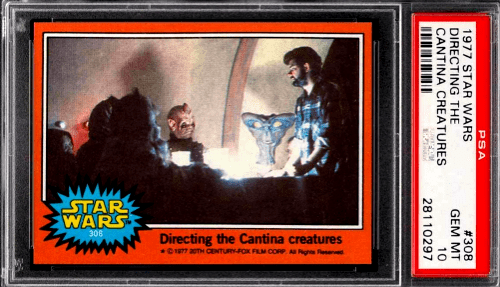 The 1977 Topps Star Wars trading cards are considered to be the original Star Wars Trading Cards and can fetch big bucks at high grades.

The most recognizable 1977 Topps Star Wars comes from the first series… surrounded by the classic blue starfield border, it’s a design that’s instantly recognizable to Star Wars FANBOYS across the globe

The 1977 Topps Star Wars Trading Card set had a total of 330 cards, 55 stickers, and were broken into 5 series as shown below:

34 See-Threepio Diverts the Guards
35 Luke and Han as Stormtroopers
36 Blast of the Laser Rifle!
37 Cornered in the Labyrinth
38 Luke and Han in the Refuse Room
39 Steel Walls Close in on Our Heroes!
40 Droids Rescue Their Masters!
41 Facing the Deadly Chasm
42 Stormtroopers Attack!
43 Luke Prepares to Swing Across the Chasm
44 Han and Chewie Shoot it Out!
45 The Light Saber
46 A Desperate Moment for Ben
47 Luke Prepares for the Battle
48 Artoo-Detoo is Loaded Aboard
49 The Rebels Monitor the Raid
50 Rebels Leaders Wonder About Their Fate!
51 See-Threepio and Princess Leia
52 Who Will Win the Final Star War?
53 Battle in Outer Space!
54 The Victors Receive Their Reward
55 Han, Chewie and Luke
56 A Day of Rejoicing
57 Mark Hamill as Luke Skywalker
58 Harrison Ford as Han Solo
59 Alec Guinness as Ben Kenobi
60 Peter Cushing as Grand Moff Tarkin
61 Mark Hamill in Control Room
62 Lord Vader’s Stormtroopers
63 May the Force be With You!
64 Governor of Imperial Outlands
65 Carrie Fisher and Mark Hamill
66 Amazing Robot See-Threepio

67 See-Threepio and Luke
68 The Millennium Falcon
69 Threepio’s Desert Track
70 Special Mission for Artoo-Detoo
71 The Incredible See-Threepio
72 Ben Kenobi Rescues Luke!
73 The Droids Wait For Luke
74 Luke Skywalker on Tatooine
75 Darth Vader Strangles a Rebel
76 Artoo-Detoo on the Rebel Starship!
77 Waiting in the Control Room
78 Droids to the Rescue
79 Preparing to Board Solo’s Starship!
80 “Where has R2-D2 Gone?”
81 Weapons of the Death Star
82 A Daring Rescue!
83 Aboard the Millennium Falcon
84 Rebel Pilot Prepares for the Raid!
85 Luke on the Sand Planet
86 A Mighty Explosion!
87 The Droids Try to Rescue Luke!
88 Stormtroopers Guard Solo’s Ship
89 The Imprisoned Princess Leia
90 Honoring the Victors!
91 Solo and Chewie Prepare to Leave Luke
92 Advance of the Tusken Raider
93 Stormtroopers Blast the Rebels!
94 Interrogated by Stormtroopers
95 Sighting Artoo-Detoo!
96 The Droids on Tatooine
97 Meeting at the Cantina
98 See-Threepio
99 Ben with the Light Saber!

100 Our Heroes at the Spaceport
101 The Wookiee Chewbacca
102 Rebels Prepare for the Big Fight!
103 Stormtroopers Attack Our Heroes
104 Luke’s Aunt and Uncle
105 Imperial Soldiers Burn Through the Starship!
106 A Message From Princess Leia!
107 The Tusken Raider
108 Princess Leia Observes the Battle
109 Ben Turns Off the Tractor Beam
110 Threepio Fools the Guards!
111 Chewie and Han Solo!
112 Threatened by Sand People!
113 Ben Hides From Imperial Stormtroopers
114 Planning to Escape!
115 Hiding in the Millennium Falcon!
116 Honored for Their Heroism!
117 Chewbacca Poses as a Prisoner
118 R2-D2 and C-3P0
119 Threepio, Ben and Luke!
120 Luke Destroys an Imperial Ship!
121 Han Solo and Chewbacca
122 The Millennium Falcon Speeds Through Space!
123 See-Threepio Blasts a Stormtrooper!
124 Threepio Searches for R2-D2
125 Luke in Disguise!
126 A Quizzical Threepio!
127 The Rebel Fleet
128 Roar of the Wookiee!
129 “May the Force be With You!”
130 Pursued by the Jawas
131 Spectacular Battle!
132 Lord Vader and a Soldier

199 The Star Warriors Aim for Action!
200 C-3P0 Searches for his Counterpart
201 Raid at Mos Eisley!
202 Inquiring About Obi-Wan Kenobi
203 A Band of Jawas
204 Stalking the Corridors of the Death Star
205 Desperate Moments for Our Heroes!
206 Searching for the Missing Droid
207 C-3P0 (Anthony Daniels) – obscene version
207 C-3P0 (Anthony Daniels) – corrected version
208 Luke Skywalker on the Desert Planet
209 The Rebel Troops
210 Princess Leia Blasts the Enemy
211 A Proud Moment for Han and Luke
212 A Stormtrooper is Blasted!
213 Monitoring the Battle
214 Luke and Leia Shortly Before the Raid
215 Han Bows Out of Battle
216 Han and Leia Quarrel About the Escape Plan
217 The Dark Lord of the Sith
218 Luke Skywalker’s Home . . . Destroyed!
219 The Swing to Freedom!
220 “I’m Going to Regret This!”
221 Princess Leia (Carrie Fisher)
222 “Evacuate? In our moment of triumph?”
223 Han Solo covers his friends
224 Luke’s secret yen for action!
225 Aunt Beru Lars (Shelagh Fraser)
226 Portrait of a princess
227 Instructing the Rebel pilots
228 R2-D2 is inspected by the Jawas
229 Grand Moff Tarkin (Peter Cushing)
230 Guarding the Millennium Falcon
231 Discussing the Death Star’s future
232 The Empire strikes back!

Not only should Star Wars Trading Cards constantly rise in value over the years but at some point, we predict a major celebrity will buy one making them super hot for a few years before settling back down to the normal price range (similar to the Pokemon card craze we are experiencing now).

In the event that does happen to pick up a few high-end 1977 Star Wars Trading Cards sounds like a good idea… even if our prediction fails these cards still should do very well ROI-wise over the next 10 to 20 years…. cheers Luke Skywalker!

Star Wars trading cards can be worth thousands of dollars if they are in great shape i.e. high grades such as PSA 10 or BGS 9.5.

What are the best Star Wars trading cards?

Yes people do collect Star Wars cards. We have sold a few dozens in our short sales history and millions of people from around the world own at least one Stars Wars Card. 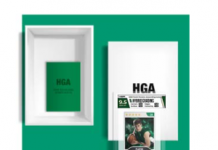 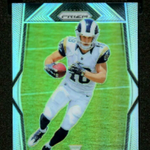